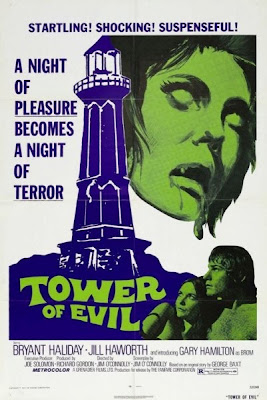 TOWER OF EVIL is probably the best 1970's horror film you've never heard of. For those in the know, this 1972 film is sometimes regarded as the linchpin between the older style of gothic horror film and the soon-to-come 1980's-style slasher film. Almost ten years ahead of its time. Some accolade for a small little film featured on a double bill with late-Hammer subdued horror DEMONS OF THE MIND. But this one is indeed a surprise! You won't be expecting much when you see the opening shot of an obvious model lighthouse; however the model is shot so beautifully engulfed in fog from a fog machine and featuring a lovely slowly-rotating camera movement circling the lighthouse that suddenly you're in a forgiving mood. Then the opening scene with two old salts (Jack Watson -- the beleaguered captain of Esther from FFOLKES -- as Hamp and George Coulouris -- of CITIZEN KANE -- as his father) putt-putting through the pea-soup fog on a boat called "The Sea Ghost" intensifies the good ole moody mood better than a Season 1 SCOOBY-DOO cartoon! The two men are going to Snape Island (HORROR OF SNAPE ISLAND being an alternate title of this film as well as BEYOND THE FOG -- nothing like literal movie titles) which is shunned by commonfolk as being not at all nice. As the men step on the island, it isn't long before they encounter a severed bloody hand -- quickly followed by the discovery of said hand's former owner lying naked and dead face down in a pool of water arse up to the world if you please! 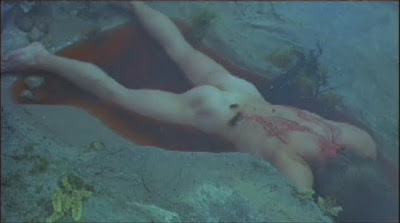 "Me agent didn't tell me I was playing "Arse Up Naked Boy!"

Have I mentioned there is indeed a copious amount of nude flesh paraded about in this movie and we are treated shortly to some more when the (face-up) nude corpse of a woman is soon discovered inside the lighthouse shack. Well, face up may be a misnomer because while the body is facing up the head is facing down -- that is because it has been severed from the body but put in its former place by a murderer with an obvious sense of humour. I will admit that I too am at a loss as to how this special effect was created -- the head, of course, is a fake but when one of the men lifts up the head we can plainly see the real body of the actress with no head! No CGI back then, kiddies, and there is no evidence of any matte work or similar SFX tricks known at the time. Perhaps the actress really did bend her head all the way back into a false floor but I don't see how that's possible. Anywho, the head winds up getting loose and bouncing merrily down the lighthouse steps. Excellent! Then a subsequent shot features one of the men gingerly walking around the severed head as it lays on the floor (this shot, however, I know EXACTLY how it was done -- obviously). I think you'll guess too by looking at this still. 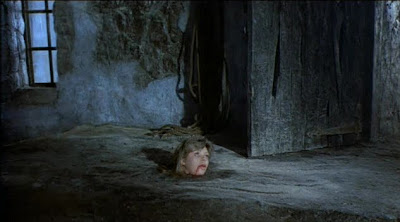 "Is this really how to get ahead in the British film industry?!?"

The two men separate and George Coulouris enters a room behind the door of which is another nice young man (clothed, this time) impaled to the wall with a solid gold Phoenician spear (nice!).

Unfortunately for our Mercury Theatre veteran, Coulouris moves to another room and hears noises coming from behind a door. When he opens it, a starkers Candace Glendenning (fresh from the film NICHOLAS AND ALEXANDRA) springs out and stabs Coulouris with a knife and runs screaming from the place. Until, that is, she runs straight into Jack Watson who conks her in the head with a stick. End scene. Now how's THAT for a way to start a movie?!? No one can accuse director Jim O'Connolly of letting things drag along! 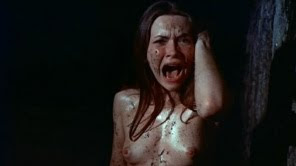 "Has Rasputin nicked me clothes AGAIN?!?!"
***
The crazed naked girl with the knife is called Penny (and no, the Sea Ghost is NOT PENNY'S BOAT!!! heh heh) and she is promptly assumed to have killed the other three naked twenty-somethings. However, she is in a state of catatonic shock and unresponsive to all questions so a psychiatrist (played by CALLAN's own Anthony Valentine) uses a bank of what has been called "disco lights" to snap her out of it (...and I'm pretty sure that's a game of Connect Four on the table behind him). 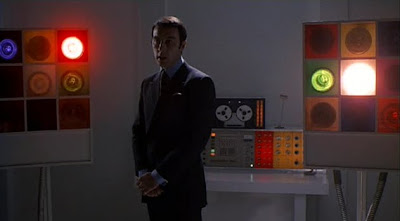 "I'll bet Hunter didn't make Patrick Mower work with disco lights when he took my place!"
***
Throughout the film, we get snippets of what happened on the island through flashbacks. Of course, Penny didn't kill her companions -- there is a giggling homicidal maniac loose on the island. Of course, a group of archaeologists (I suppose) takes an interest in the Phoenician spear and decides to head to the island to take a look. Good move, guys! So naturally, the group hires the self-same Hamp and the self-same boat "The Sea Ghost" and sail out to the self-same island to eventually meet up with the self-same giggling homicidal maniac (in between discussing jazz festivals, smoking grass and having sex with one another). And that's basically it. 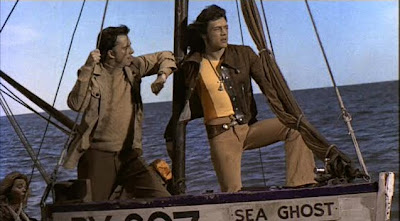 "Behold my ridiculously tight flares, ye mighty and despair!"
***
Of course, it's NOT it because the film is just so damn entertaining in spite of itself that, no matter how much you want to dismiss it, it remains kinda impressive. As I said, the film does seem like the missing link between classic horror films like THE OLD DARK HOUSE (1932) and nubile teenagers having sex and then getting killed HALLOWEEN (1978); in fact, the homicidal giggling maniac in both THE OLD DARK HOUSE and TOWER OF EVIL are both named Saul. Coincidence? Either way, the film is dripping with spooky atmosphere (AND fog . . . AND blood) while paradoxically playing like its ahead of its time with the sex and the language and the gore (which, while prominent, is never gratuitous paradoxically). This is, indeed, a paradoxical film and, despite having watched it more than once, I still can't put my finger on why I like it so much. It does contain its fair share of laughable moments but somehow they never destroy the mood of the film or make it descend into camp or self-parody or a "so bad its good" mode. No, despite its faults, TOWER OF EVIL is somehow one of the best horror films I've seen for quite some time. 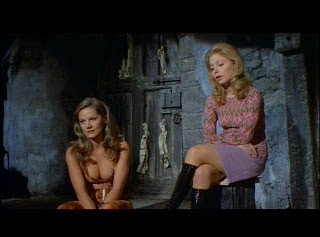 "Anna and Jill mistake an exploitation-horror movie for a production of Private Lives."
***
The film has it's share of high profile cameos: the aforementioned one scene with George Coulouris, the several scenes involving Anthony Valentine and another single scene featuring Dennis Price. However, the movie relies completely on its cast of little-known (at least over here in the States) British actors (several of whom are made to utilize dodgy American accents); but they all take the film seriously and still give good performances. Among them the aforementioned Candace Glendenning, Jill Haworth (who sadly died just a few days ago as I write this), Bryant Haliday, Anna Palk, Jack Watson, Gary Hamilton (looking very Mick Jaggerish and wearing an impossibly tight wardrobe), Robin Askwith, Serretta Wilson and others. 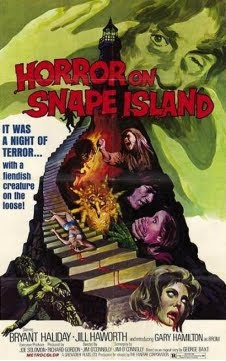 The Richard Gordon-produced TOWER OF EVIL began shooting at Shepperton Studios on September 13, 1971; the exact day Amicus' famed horror portmanteau film TALES FROM THE CRYPT began shooting at the exact same studio! As previously noted, TOWER was double-billed with the latter-day Hammer production DEMONS OF THE MIND to make a rather odd pairing; TOWER is balls out knock-you-in-the-head exploitation while DEMONS is a subdued, cerebral odd little horror which its studio had no faith in, didn't promote and dumped unceremoniously into a double-bill with what they thought was a boneheaded proto-slasher film. Of the two films, TOWER is the much more entertaining film. There were even some rather good notices: Variety even called TOWER "...a slick entry for the exploitation market, where this British entry may be ballyed for good returns . . .While the story line is somewhat confusing and contrived, it serves well enough for the purpose and excellent production values and cast help build excitement." And I think Variety has hit the Phoenician spear on the head; TOWER OF EVIL doesn't set the world on fire with its plot which was old and cliched during the silent film era -- in fact TOWER OF EVIL could be called THE CAT AND THE CANARY in a lighthouse. No, where TOWER is particularly good is in it's style and execution -- and I don't mean the execution of nubile young streakers. TOWER OF EVIL is simply the best example I can think of combining classic old-school gothic horror with modern-day "body count" films still to come later in the 1980s. John Carpenter's HALLOWEEN has tons of atmosphere but I wouldn't call it "gothic". 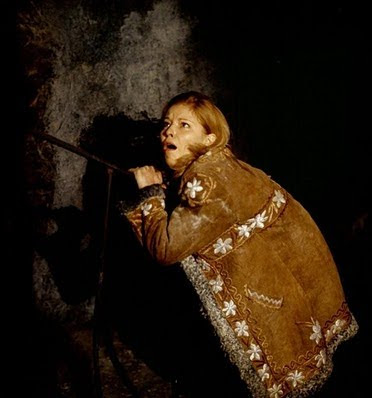 The splendid lighthouse sets frankly look wonderfully creepy, the lighting is kept properly low-key and the photography (by DP Desmond Dickinson) is superb in combining darkened mood as well as early 70's vibrant colour. The film was based on an original story by George Baxt: writer of "outrageous mystery novels" (and TOWER OF EVIL is certainly outrageous) as well as script work on such classic films as CITY OF THE DEAD, BURN WITCH BURN, VAMPIRE CIRCUS and REVENGE OF FRANKENSTEIN. If you have even the slightest interest in the horror film, I urge you to track down TOWER OF EVIL because I think you will pleasantly surprised at uncovering a neglected, multi-faceted yet flawed 70's jewel. I am inordinately fond of this movie, ya dig?
Posted by Cerpts at 12:37 AM

Where do you get this stuff?

Oh wait, I mispoke. The fairy is Cheeks. I meant to say benevolent benefactor.

Hold everything. I'm really getting mixed up here. Cheeks isn't the fairy, Cheeks is the metrosexual, Fink is the fairy. . . um Jimmy Osmond is a long-haired lover from Liverpool and Michael Bolton is the Anti-Christ. There now I think we've got this all sorted out.