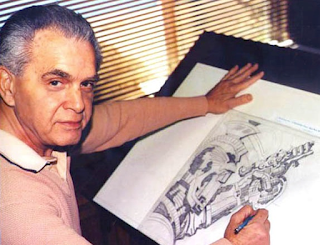 AUGUST 28, 1917 MARKED THE 100TH BIRTHDAY OF JACK "KING" KIRBY; ONE OF, IF NOT, THE MOST INFLUENTIAL COMIC BOOK ARTISTS OF ALL TIME.

This whole year has been marked by many centennial celebrations  -- a fact which surprised me even though such accolades for Jack are entirely well-deserved.  It's good to know that we still can recognize greatness when numbing mediocrity gets all too much press (as well as electoral votes).  However, it seems like almost everything to be said about Kirby's monumental contributions to comics history as well as his artistic greatness has already been covered by the countless testimonials, re-evaluations and personal stories published recently.  One recent book alone -- KIRBY 100  --  features 100 comic book artists choosing their favourite Kirby work and writing about what Jack meant to them.  It seems like the only thing for me to do is add my little reminiscence to the growing chorus of appreciation. 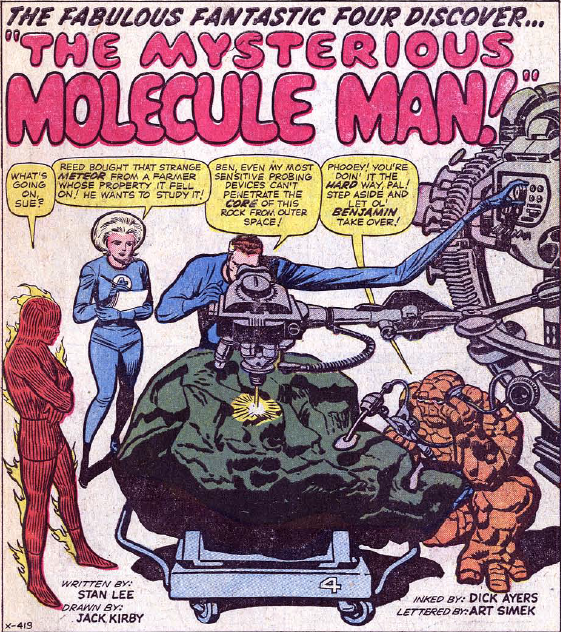 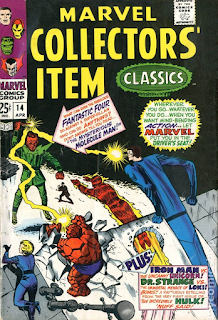 Many present-day Kirby fans seem to have had a similar first impression of Jack's artwork and truthfully I had the same experience:  I didn't like Jack Kirby's art for a long time.  Not my first reaction, however, because my very first exposure to Jack's artwork found me liking it.  I can actually remember the very first Jack Kirby comic book I bought/read:  MARVEL COLLECTORS ITEM CLASSICS # 14.  Not only is this the first Kirby comic I bought but it also may very well be the very first poly-bagged back issue I bought, too!  I've written before of how, in the early to mid-1970's, my grandfather used to take me to the now-long-gone Pennsauken Mart almost every weekend.  Inevitably, my first stop in this indoors "farmer's market" of countless shops was one that sold comic books, magazine and paperback books; most of which had the covers torn off.  Each coverless comic book was about 10 cents each and I loaded up every weekend.  But oddly, behind the counter, there was a wall that had a handful of older comic books (bagged and boarded) which were outrageously expensive -- probably a couple of bucks EACH!!!  For a 6 year old, that was a mint and I didn't have the nerve to ask my grandfather to shell out that kind of dough for ONE comic book!  But one day, I dunno maybe it was my birthday or something, I actually DID ask him -- and, of course, he bought it for me -- and it was the above-pictures MARVEL COLLECTORS ITEM CLASSIC # 14. 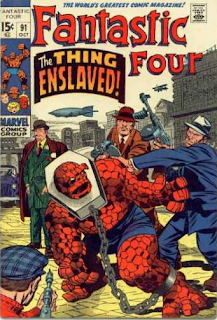 I'd never read or even heard of the Fantastic Four before and this may even have been the very first Marvel comic I ever read as well; I was a dyed-in-the-wool DC kid.  But there must've been something about that crackling cover that sold me.  When I got it back to my grandparents' house, I tossed the bag and board (the concept of back issues being worth anything was still a long way in my future), and read "THE MYSTERIOUS MOLECULE MAN" (reprinted from FANTASTIC FOUR # 20).  I loved it and reread it countless times.  The art and story were so bizarrely different from anything I was reading in my DC comics (or my Gold Key or Harvey or Archie comics, for that matter) that it became a benchmark issue as far as my comic-reading history would evolve.  So naturally, I should've immediately turned into a 100% Marvel Zombie -- only I didn't.  True, the very next week I conned my grandfather into buying me ANOTHER bagged and boarded back issue -- this time FANTASTIC FOUR # 91 (my SECOND Jack Kirby comic) but I still only became a sporadic buyer of Marvel Comics until the early 1980's.  This must've been around the time when Jack Kirby left Marvel and went to DC so then-current Marvel books didn't have Jack's art in them.  So I was probably 75% DC kid/25% Marvel kid. 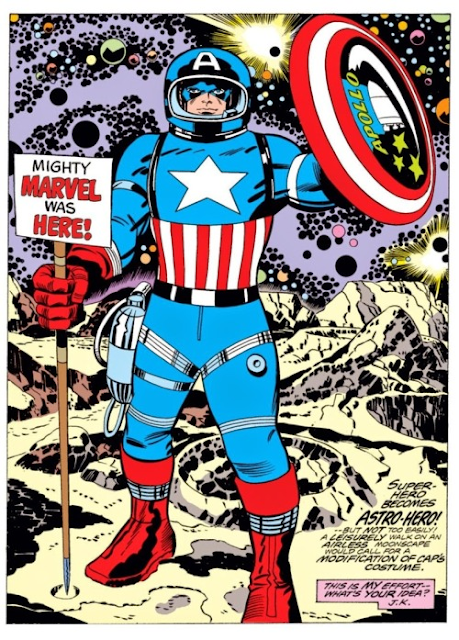 So back to my earlier statement: in the next several years, as I got more and more into comic books, I found myself not liking Jack Kirby's art.  This appears to be a common occurrence with present-day Kirby lovers.  This was the Neal Adams era of comic book art:  slicker, more polished-looking.  To my dumb, childhood eyes, Jack Kirby's art looked clunky and ugly.  I was grooving on the JLA artwork of Dick Dillin, the BRAVE AND THE BOLD perfection of Jim Aparo, the gorgeous LEGION OF SUPER-HEROES, WARLORD and GREEN LANTERN/GREEN ARROW of Mike Grell, THE FLASH of Irv Novick, the BATMAN of Marshall Rogers and the intricate maggoty-grave-dirt of Berni Wrightson.  At that time, I would dismiss Jack Kirby's art with a simple "I just don't like it".  The same, by the way, went for the artwork of the likes of Carmine Infantino, Gil Kane, Joe Kubert and other "old-timers".  My favourite artist was George Perez and these guys' art was VERY different to that!  But, as with everything, our tastes mature and I began to appreciate the artwork of these guys more and more until I now love them.  And no one more than Jack Kirby.  I still love the art of George Perez but now I can really SEE Jack Kirby's artwork.  The sheer power of it; it's like 3-D without the 3-D!  The immaculate storytelling and page composition.  Those breathtaking (and justly famous) two-page spreads Jack loved to do.  I've actually stared and contemplated Jack's art trying to figure out exactly what he did that no one else seems to be able to do . . . and I haven't figured it out yet.  But no comic book art "feels" the same as Kirby.  Jack's figures have a weight to them that no other artist has duplicated.  Just look at the power of these monumental splash pages and how the figures seems to occupy real space.  This is just a random sampling but they're all stunning! 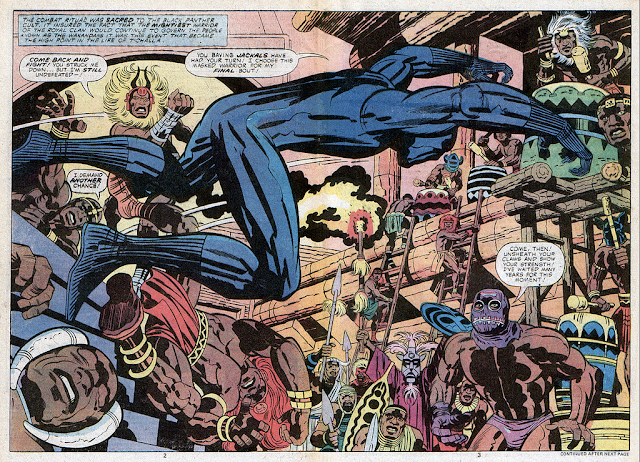 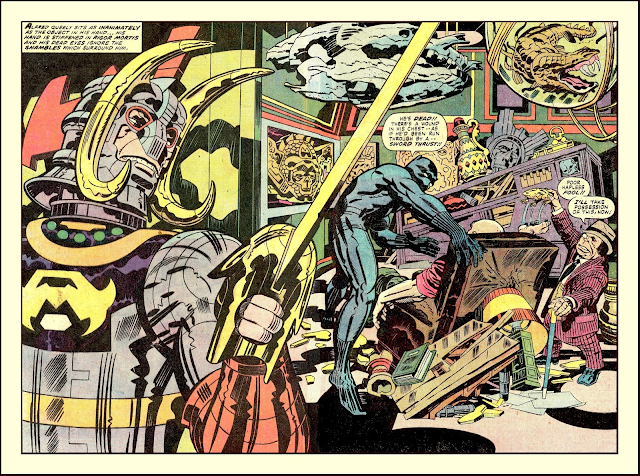 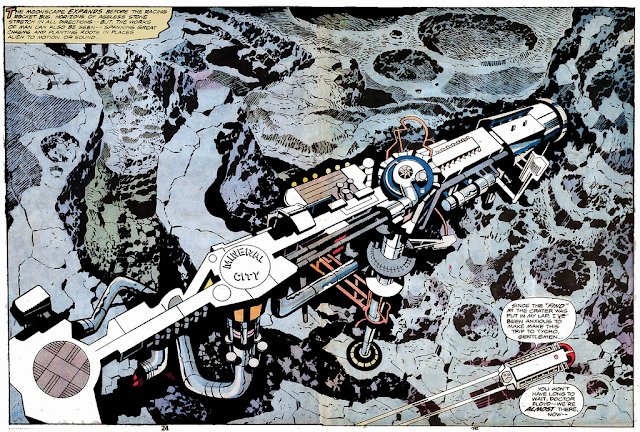 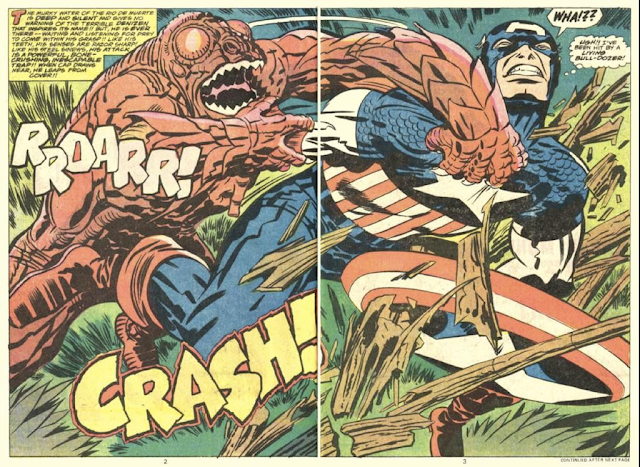 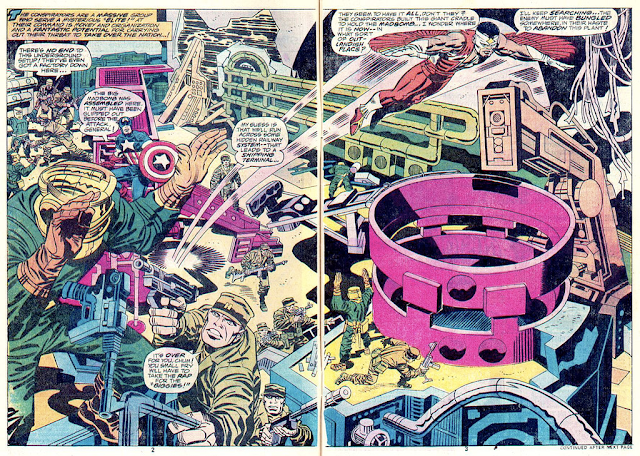 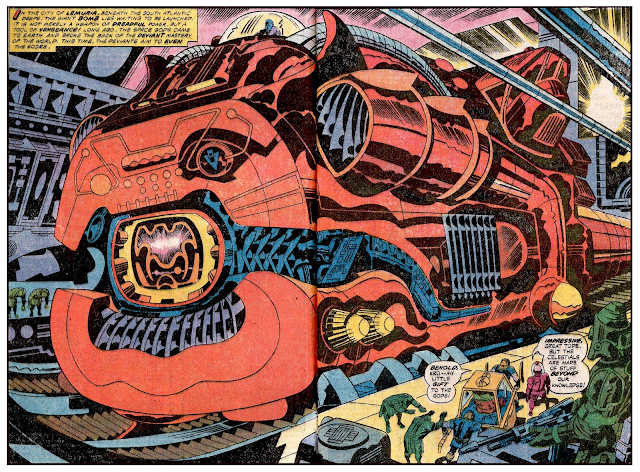 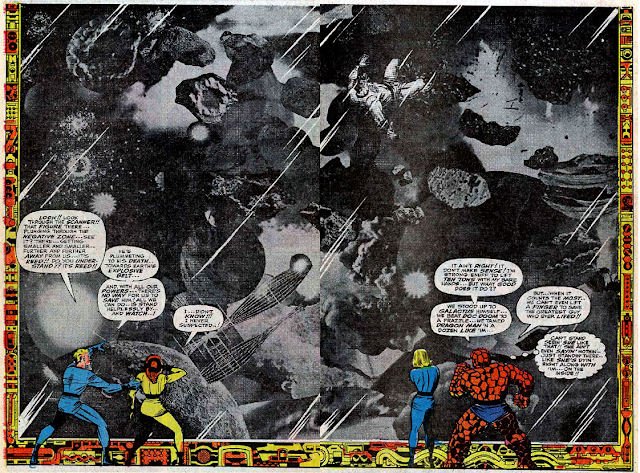 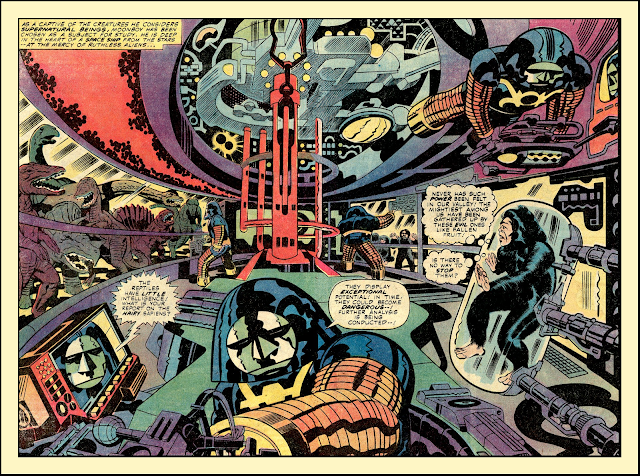 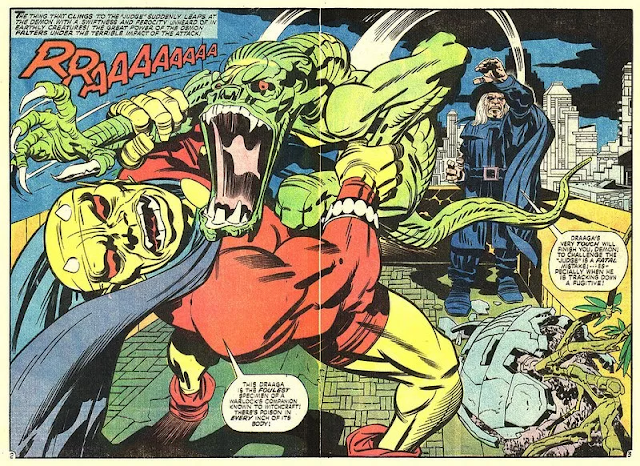 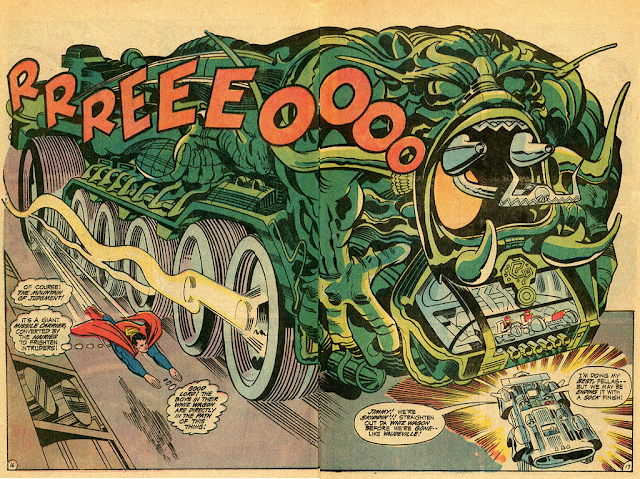 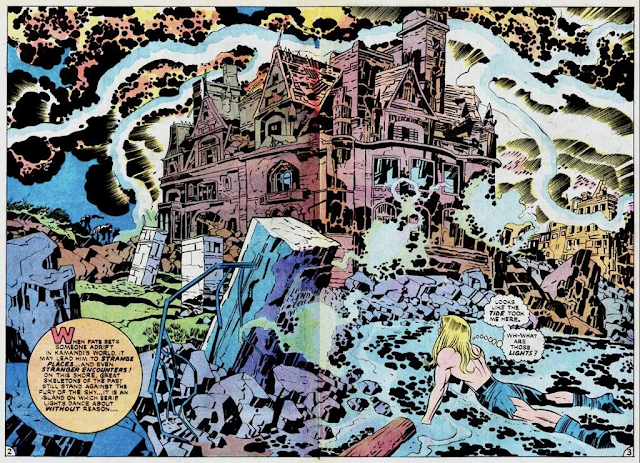 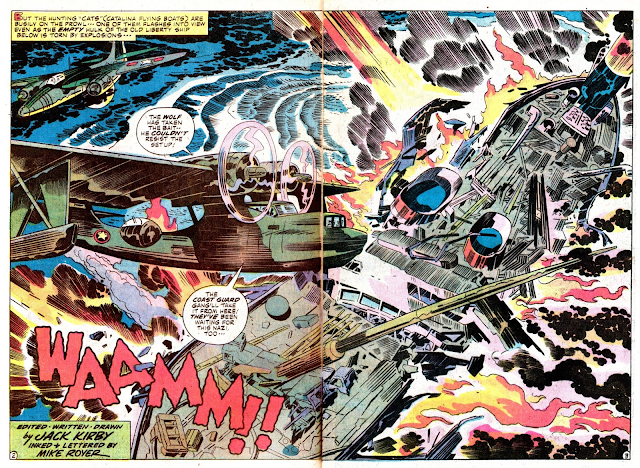 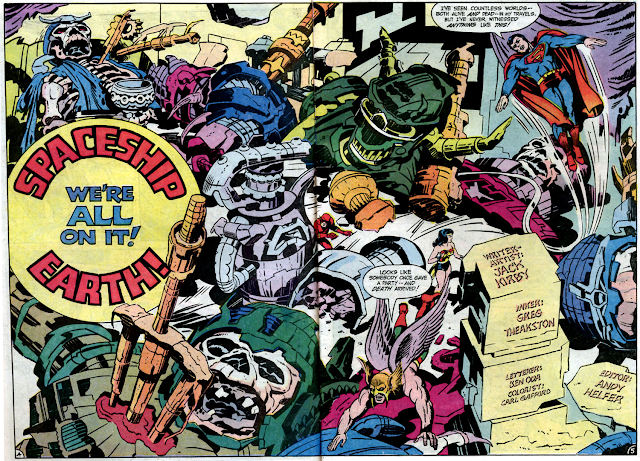 I guess it's the "indescribable something" in Jack Kirby's art that makes all of us celebrate his 100th birthday with such effusiveness and warmth.  His influence on the art of comic books is unmatched and his drawing has never been duplicated.  We love you, Jack. . .and we miss you.
Posted by Cerpts at 4:53 PM 1 comment: