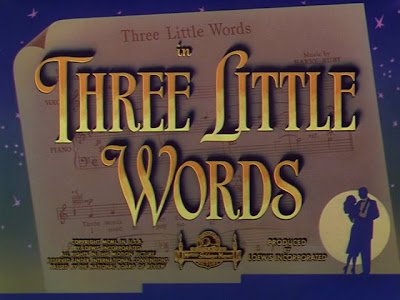 There's real life and there's the MGM musical; and never the twain shall meet. "THREE LITTLE WORDS" is one of my favourite musicals: it's about the "true" life story of songwriters Bert Kalmar and Harry Ruby who wrote such standards as "Who's Sorry Now", "Nevertheless", "Thinking of You", "I Wanna Be Loved By You", "Hooray for Captain Spaulding" and many more. And naturally, being an MGM musical from 1950 there is a LOT of artistic license brought to bear. Nevertheless (pun intended) I like to think this is EXACTLY the way the songwriters' lives played out. "THREE LITTLE WORDS" is one of Fred Astaire's favourites of his own films (and he knew both the songwriters from his days in vaudeville). However, the film is less a Fred Astaire vehicle than a musical biopic; Fred is always in service to the story even though we do get to see quite a few Astaire dance routines thrown into the film at appropriate moments. 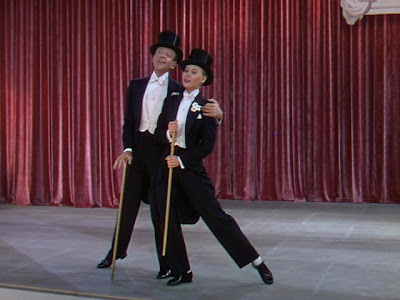 Bert Kalmar (Fred Astaire) and his fiancee Jessie Brown (the incomparable Vera-Ellen) are vaudeville hoofers -- and quite a successful dance team at that. Despite the great success, Kalmar pines to become a stage magician. He in fact secretly performs a (very bad) magic act in a run down vaudeville theater under the assumed name of "Kendall the Great". During a particularly abyssmal performance, Kalmar's magic act is botched by stagehand Harry Ruby (the also incomparable Red Skelton -- oh yeah, and by the way, Astaire is incomparable too I just forgot to mention it) who would rather be playing baseball than pushing geese and rabbits through trapdoors for a hack magician. 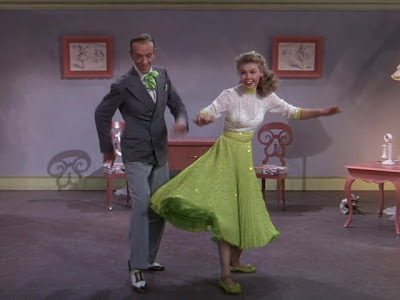 After the show, Kalmar is furious and Ruby gets fired. Jessie and Kalmar's agent Charlie (Keenan Wynn) find out about Kalmar's "magic act" and gently tease him about wanting to be a third rate magician when he's a first rate dancer. There is talk of Bert and Jessie finally tying the knot. But as fate would have it, a backstage accident smashes Bert's knee and the dancer is laid up indefinately -- he may never dance again. Since Bert has "finally stopped moving long enough", Jessie finally accepts his proposal of marriage -- however, Bert is too proud to marry her without being able to support her and he doesn't want to hold her back from a successful career -- so Jessie departs in tears to become a solo while Bert decides to attempt songwriting to make a living (a task he's toyed with in the past but never took seriously). 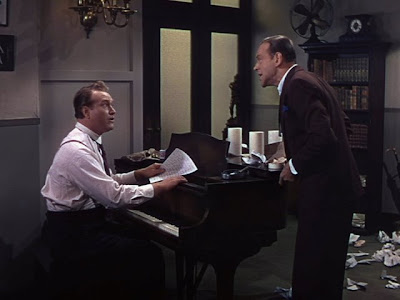 While visiting a Tin Pan Alley building, Kalmar overhears a songplugger playing a song he wrote on a piano. Naturally, it's Harry Ruby -- but Kalmar doesn't recognize him as the lout who spoiled his magic act. He looks familiar though... The song Ruby is playing (for which he has no lyrics yet) will one day become the standard "Three Little Words"; however, this song becomes a running gag throughout the movie. Kalmar thinks it's "a nice enough little tune" but asks Ruby "what else ya got?" All throughout the movie (long after the two have become a successful songwriting team), Ruby will play this tune whenever Kalmar asks if he's got any new tunes. As the two become fantastically successful as songwriters, Bert eventually reconciles with Jessie and marries her. Besides Kalmar's fondness for magic, he also has a yen to become a playwright. Unfortunately, the play Bert spends years writing is not very good and Ruby is told of this. For Bert's own good (because he's going to sink everything he's got into this turkey of a play and will almost certainly lose his shirt), Ruby warns off the only possible investor and the play dies unborn. 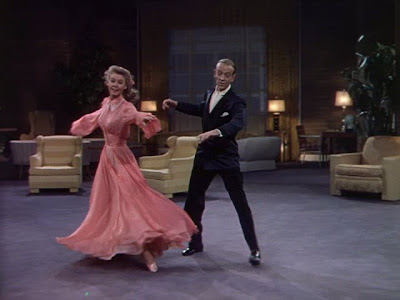 This crushes Kalmar but Ruby can never let on about what he did. Concurrently, Harry is constantly falling in love with girls who are -- shall we say -- not the marrying kind. Ruby is constantly getting engaged to these hoydens while they are seeing other gents behind his back. Each time this happens, Kalmar arranges for Ruby to go down to baseball camp and practice with his friend's professional baseball team. By the time Ruby returns, the woman of the moment has already married somebody else. Ruby, unaware of each woman's philandering, believes the breakup was caused by his sojourn down at the baseball camp -- and he would be livid if he found out it was Bert that scotched his romantic aspirations. Of course, these two secrets among friends are BOUND to come out sooner or later. And they do. And it breaks up the songwriting team. The two men no longer speak and the years go by . . . until their wives hatch a scheme to get the two songwriters together again. 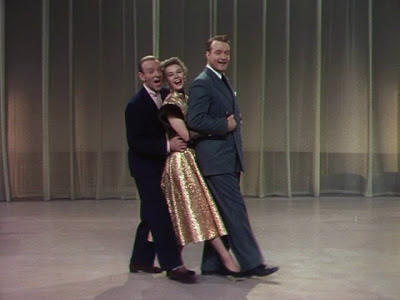 The songs in the film are naturally classics; arising as they do from the Kalmar and Ruby songbook. Richard Thorpe's direction is swift, enjoyable and to the point. Not too much time goes by without a song or a dance number appearing exactly where we want one. The cast, of course, is second to none. Fred Astaire and Red Skelton have a terrific chemistry together as Kalmar and Ruby. It's also always a huge treat to hear Red Skelton sing; it's another apparently little known fact about Red Skelton that he had a fine singing voice. Astaire in fact does some really fine acting in the film and he and Skelton make their characters quite real and complex; not cardboard cutouts at all. 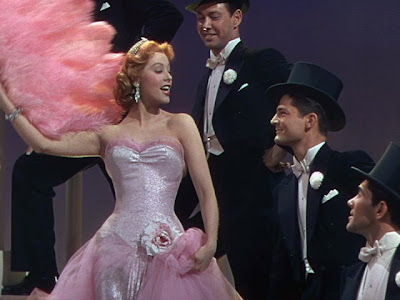 Add Vera-Ellen to this pair and the chemistry is even better; she also earns kudos for her acting job. All three get on so well together that you believe they've known each other for years. Later in the film, as the songwriting team has broken up and Kalmar is not there to prevent it, Ruby marries a singer/actress named Eileen Percy (Arlene Dahl). BUT it turns it this is finally the right woman for Ruby and the match is perfect. Dahl fits in perfectly with the other three cast members (if in fact possessing a little less chemistry than the others). There are also some very nice set pieces sprinkled all throughout the film with some effective cameos. The real Harry Ruby in fact appears as one of the baseball players Skelton throws a pitch to. 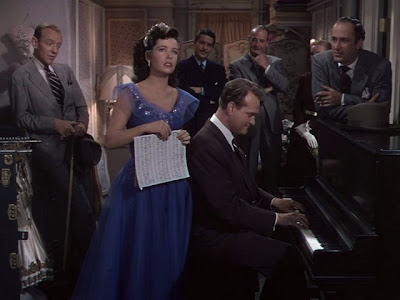 Stunningly beautiful Gloria DeHaven appears in the film playing her own real life mother as she sings the new Kalmar-Ruby composition "Who's Sorry Now". 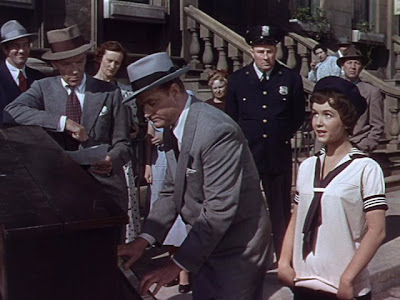 And an incredibly young Debbie Reynolds appears as Helen Kane (better known the inspiration for Betty Boop); however when she sings "I Wanna Be Loved By You" it is the REAL Helen Kane who dubs her singing voice. And speaking of dubbed singing, Vera-Ellen's singing was dubbed (as was common at the time) by Anita Ellis; however, you'd never know it unless someone told you.
"THREE LITTLE WORDS" is one of those movies I've been watching again and again and again since childhood. The immense charm of the actors, the terrific songs and comedy, the classic dance numbers by Fred and Vera-Ellen -- all this makes it one of my top 5 favourite musicals of all time. A couple years ago the film was FINALLY released on DVD inside a box set called "Classic Musicals of the Dream Factory" and then released separately as a stand alone disc. The production values by MGM are, of course, superb and the DVD print is damn near spotless: vivid, saturated colours and wonderful sound. A few years before the DVD, I was also lucky enough to pick up the soundtrack cd (which was released in a very limited edition). It's a mystery to me why this film isn't better known but once seen it's hard to resist. Maybe because it's not too flashy and doesn't feature much in musical pyrotechnics. It's just pure joy to watch and one of the best musicals MGM ever made. 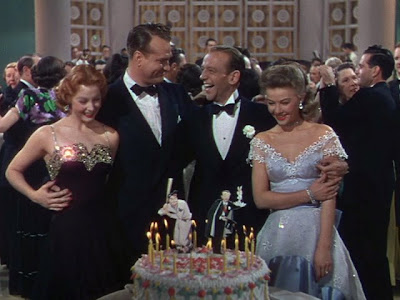