I JUST HAD TO MENTION THE BOOK I'M READING AT THE MOMENT: DAVID THOMSON'S "HAVE YOU SEEN...?: A PERSONAL INTRODUCTION TO 1,000 FILMS". 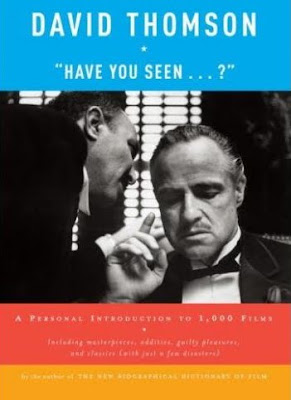 Thomson, of course, is the London born but US based film critic whose "BIOGRAPHICAL DICTIONARY OF FILM" is one of the best books on movies you can grab. The fairly recent updating of that classic 1975 tome is now accompanied by this brand-new 1000-pager (who is nutty enough to write TWO 1000 page books on movies in one life-time?!?). Now the really nice thing about a book like this is that it's completely fun and not dry scholarship; it's as if an extremely witty film fan is taking you by the hand and asking you the title question "Have you seen THIS one????" There's an enthusiasm there which is quite refreshing; especially from a nearly 70 year old film fanatic like Thomson. He is quick to point out that these are not the "best" 1000 films ever made -- in fact, he writes about quite a few which he is not too fond of -- but just posing the question "Have you seen these rather interesting or important movies?"
The format of the book is quite simple: Each film is listed A-Z (providing the nicely incongruous span from ABBOTT AND COSTELLO MEET FRANKENSTEIN to ZABRISKIE POINT) in short discussions (not film reviews, really) of each film in essays of 500 words. 1000 pages, 1000 films. QED. The writing is, as I said, quite witty with a healthy dose of irony (something we Americans seem to have forgotten how to do); it's all quite conversational in tone. He gives equal time to a Luis Bunuel film and a Tom and Jerry cartoon. Here's how the author himself describes the book in an interview by San Francisco Chronicle book editor John McMurtrie:

It's a book that is there to help a lot of people of all ages and types who feel daunted and lost in the video store or when looking at a catalog, and they see that there's so much that they don't know where to begin. In the end, I don't believe that there are a thousand or 10 best films. There's a whole lot of films that are going to appeal to a vast number of people. And if you or someone else likes films I don't like, I've long since got past the age of looking down my nose at you. Good luck to you, I say, you're getting pleasure. This is getting to be a pretty mean, brutal life (laughs) - day by day at the moment - and we deserve a little bit of pleasure and ease, and find it where you can. Don't break the law while you're doing it, maybe, but I don't mean to say that taste is an absolute. Taste is personal. You know, some people don't like anchovy, I love anchovy. And that's the way things go.

That having been said, it's quite nice for me to find that many times Mr. Thomson's taste mirrors my own. For instance, how ecstatic was I to see that he included the 1938 Katharine Hepburn/Cary Grant film HOLIDAY and, even more excitingly, praised it to the skies. It's one of my top 10 favourite films. Thomson writes: "It's a nice trick question: What's the most sophisticated film Cary Grant and Katharine Hepburn made in 1938? And the answer is HOLIDAY, which is really a new subgenre (of enormous promise) in which someone says, 'Is this a comedy?' and the answer goes, 'Only if you're laughing.' As a piece of material, HOLIDAY is very serious: It's what are we going to do with life -- is it a burden or a duty, or a holiday?" Thomson goes on to say "HOLIDAY was, in a way, a routine picture. Can you credit such brilliance as a routine thing? Can you really hide from the grandeur of smart comedy in all the Hollywood forms -- or miss what has been lost? Yes, they made BRINGING UP BABY, too!" This quoting from his essay on HOLIDAY also helps prove my point that this book is not a collection of movie reviews but instead a very personal reaction to the films themselves. After all, isn't that what we film fanatics relate to? Isn't that what all these movie blogs are about? And this book actually reads somewhat like an expertly-done movie blog. Thomson admits that he had to have his arm twisted by his publisher and his agent to embark on a book this size because he thought it would be an horrendous chore. Imagine his surprise (and ours) when the book turned out to be a joy! 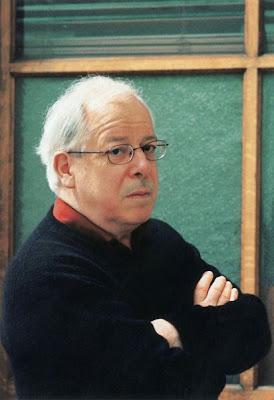 Back to our combined tastes. It's also quite nice to hear Mr. Thomson dislikes some movies which I dislike. Case in point: my perennial beaten dead horse FORREST GUMP about which Thomson writes: " It happens that this is the fourth entry in a row I have written in which there is the same clash between sumptuous cinematic power and intellectual emptiness. ... And I fear that it shows a condition in American culture whereby our 'art' has become helplessly subservient to our insecurities. We have been telling profound lies to ourselves, with sublime oblivion and the flourish of empty good nature. 'Have a nice movie!' " Don't get me wrong. There are some opinions Thomson has which I don't agree with and that's as it should be. In fact, that's what makes this book such an interesting read; a book which exactly mirrors one's own opinions would be a dull affair indeed. It has always been Thomson's particular strength to say exactly what he thinks and let the chips fall where they may. He does so, however, in such a non-confrontational way that even when he's bashing one of your beloved film favourites, you can't really get mad at him. Call it charm, call it wit, call it a deft pen. Whatever you call it, read it. You'll be happy you did. And you'll also have to read it with a pencil and paper to jot down all the many many films you're now dying to see!
And have I mentioned??? -- one of my favourite moments in the book itself is when takes Bunuel's EXTERMINATING ANGEL and Antonioni's L'ECLISSE (my favourite film) -- two movies by different directors which have absolutely nothing to do with each other -- and draws a line between them as if both films are occurring in the same universe and the characters from one movie move over into the other. If you've seen the films -- the characters in L'ECLISSE played by Monica Vitti and Alain Delon do not show up at their rendezvous point on the Italian street because they instead end up at the dinner party on Providence Lane in THE EXTERMINATING ANGEL. It's priceless and typical Thomson! You wicked, wicked man!
Oh, and for the record, David Thomson once DID actually list his top 10 favourite films of all time in a 2002 "Sight and Sound" interview and here they are:

You know us film fans and our lists. . .

Hohoho..if A MAN ESCAPED is what I think it is then I just added it to my collection! I like Thomson, saw him recently on a docu about Peckinpah. I'm sure he wrote a novel I read once where Jimmy Stewart's son in IT'S A WONDERFUL LIFE grew up to be Travis Bickle in TAXI DRIVER! I'm all for the criticism of enthusiasm rather than dry scholarship. I will get this book!

Forgot to mention that I recently read Thomson's ROSEBUD which, not surprisingly, is a biography of Orson Welles, and an excellent snd offbeat one too!

That sure sounds like something he'd come up with!

I just wanted to comment that i love the new pic on your blog header.

I admit confusion. A MAN ESCAPED is Bresson....I was thinking of a Franju. Sorry.

I've got HAVE YOU SEEN...and can't put it down.

Why thank you. It's from one of those movies with Europeans in it so you wouldn't like it. But they're Swedish so at least they ain't French so maybe it's got a shot with you.

Yay! But you'd better put it down now and again or else you'll get forearms the size of Popeye!!! That's a-one a-heavy book!

Did I mention I'm up to the letter "S". He'd better get movin' on the next 1000 films or I'll have nothing to read soon.