MY, IT'S BEEN A WHILE.  Two years, in fact, since the last installment of this extremely infrequent little feature I introduced and then quickly forgot about.  Simply put, here I post photos of incongruous pairings of famous people.  For the previous two examples of odd couplery, click on the "Odd Couples" label at the bottom of this post.  But here we have a very unlikely photo from the golden age of Hollywood.  While the pairing of Basil Rathbone and Marlene Dietrich isn't that odd (they would appear in movies together), it's their appearance together in character from two different movies set in two different historical eras which delights.  We see here Basil Rathbone in character as Richard III from the film TOWER OF LONDON and Marlene Dietrich as her character Frenchy from DESTRY RIDES AGAIN; both films being shot simultaneously.  I first came across this pic in the new 50th anniversary issue of MIDNIGHT MARQUEE (congrats, Gary & Sue) where it is captioned with the very funny (and FJA-like) pun: 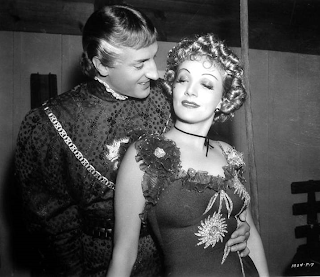 "MY KINGDOM FOR A WHORE!"
Perhaps I might be allowed my own little attempt:  "See what the boys in the throne room will have."  Or perhaps not.  ﻿
Posted by Cerpts at 9:21 AM