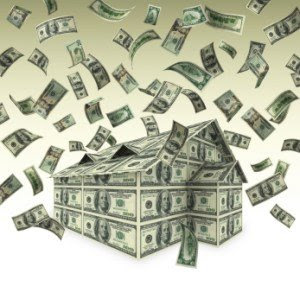 HOME PRICES DROP MOST IN 28 YEARS. That's what it said on my AOL welcome screen today. So, I don't usually acknowledge anything that's happening in the "real" world because I don't really like the "real" world and ignore it as much as possible. However, this constant "SURPRISE" at the housing market going belly up just makes me laugh and I had to say something about it.
For those of you who have known me for quite a long time, I have been saying for the last 15 years that the housing market is going to go through the floor. And now that it is, everybody's acting surprised. Why? Don't nobody listen ter me?!?!?!?!!!! As I've been saying lo these past 15 years (and I have documentation and witnesses to prove it, Geraldo): all the baby boomers in decades past had the brilliant idea of buying a home as an investment for their retirement. When they retire, they can sell the house which (theoretically) will be worth a lot more than they paid for it back in 1977 and they will use that money to fund their retirement. Sounds like a pretty good idea, right. Except for the one or two FATAL flaws that I've been pointing out for almost 2 decades.

Of course, this doesn't take into account the fact that we STILL won't be able to afford the outrrrrrrrrrrrrrrrrrrrrrrrrageous taxes. (SIDEBAR: Hey England, sometimes it seems like "taxation without representation" might just have been CHEAPER!!!). But I digress (as usual).

It's exactly the same thing that comic book collectors will remember happened to the speculation market in comic books in the mid-90's (an event that I also predicted, thanks a lot). Everybody and their mothers bought up every first issue and special foil cover of every comic book and stuck 'em in a vault hoping to make a bundle by selling them later for a HUUUUUUUGE profit. Naturally, everybody and their mother ALSO decided to sell them all at once. Result: comic book speculation market crashed and comic books that once were worth literally THOUSANDS are now worth approximately 25 cents. Just change the word "comic books" to the word "houses" and you've got the same outcome.

So what's all this hoohah about people acting surprised that the housing market has begun it's inevitable slide out of which houses will NEVER reach such high prices again. The dolts! That's right, I used the word "DOLTS" on my blog. And it felt GOOOOOOOOOOD!!!

Funny you should mention this, did I tell you we bought a comic book and are moving in July? Er... house I mean.

Congrats on your recent comic book purchase!! so where is it located, how many pages??

No you didn't. But it's a shame you didn't wait another 6 months to a year when they'd be much cheaper.

It's in the alien colony. We got 3 pages, one and half indexes and some nice art work on the cover. The back cover is nice and big too for "someone" to run around in.

This is why Whatshisname only collects Action Figures and locks them away, because NO ONE, BUT NO ONE has any first edition Wolverine X MEN movie tie-in dolls.

Oh, and I apologize on behalf of my generation that ruined things for yours. Now if you'll excuse me, I am going to go count my millions and then go inspect my fleet of BMW's.

Oh, does this mean I can rent out my copy of HOWARD THE DUCK No1 to a family from eAstern europe even though it has no running water!

Thank you very much for apologizing for the baby boomer generation. It's about time SOMEBODY did. Although I suspect you just may have been speaking facetiously. I suspect. However, since your comment is apparently commenting on things I never said, I don't quite know what it means.

Since I never said (or even hinted) that the baby boomer generation are all rich as Croesus, had millions OR a fleet of cars (whichever model). In fact, my point was exactly the opposite: the baby boomer generation (born between 1946 and 1964) who bought houses as an investment for when they retire will be sadly out of luck since their houses will NOT bring them the money they had hoped for. If baby boomers in fact had "millions" to count and a "fleet of BMW's" I don't think it would matter much to them. Whereas the entire point of my post was that they DIDN'T and would not be able to GET the money for their houses because (a simple fact) there are more of them than there are of the generation after them. Therefore it will be a buyers' market to the detriment of the seller. I didn't think I was being oblique but apparently I was. And at no point did I even suggest the baby boomers were rich tycoons.

As for my comment about that generation ruining things for my generation, one just has to look around to see that. After all, the President is a member of that generation -- as are the vast majority of them who re-elected him (which was statistically noted at the time). They are also the ones who will probably elect McCain because they (as a group) do not support Obama (whom you and I both support - just one instance among many of you kicking against your generation, by the way).

Which brings up another point: the baby boomer generation I refer to is the "majority" of that generation. Since no group of people is unanimous in ANYTHING, I didn't think it necessary to point that out. There are, in fact, believe it or not, actually some members of the baby boomer generation who don't go along with the majority of their generation. I was speaking of the majority of that generation who, among other things after World War II, placed getting ahead, material comfort and being successful above other more responsible behaviour. This stemmed quite understandably from the parents of the baby boomers, having grown up through the Great Depression and a World War, who naturally wanted their children to have everything in the post-war boom years. As the baby boom generation, with this example firmly implanted into their heads, gained their majority (age-wise) in the late 60's, 70's and 80's, they presided over a period of unprecedented consumption with no real worry about the consequences: pollution, gas consumption, natural resources, the lot. And now finally it is only as that generation is beginning to fade out of the scene in favour of the next generation that we are having to deal with the consequences of decades of thoughtless behaviour. This is what I was speaking of when I mentioned "ruined this country" for the rest of us. As someone who (as far as I can tell) has bucked the trend of your generation consistently then and now by going against all that, I would think that you would have found this all blatantly obvious. What else were you kicking against if not that very attitude surrounding you in the majority of your generation? As I said before, there are exceptions to every group of people and since you ARE one of these very exceptions (who has tried to fight against these people doing exactly what I've been talking about), I really don't get what you're saying in your comment. Your generation AS A WHOLE has indeed done untold damage to this country -- that does not mean that you are guilty by association. Also, my generation is just positioning itself to do our own damage to this country but we'll have to wait until the previous generation makes way for us -- Johnny McCain, Hillary Clinton and yes even Barack Obama (born in 1961) are all members of the baby boomer generation so we're gonna have to wait a little while longer for our shot at screwing things up. . .and don't worry, we will.

Don't be ridiculous. I've already told you that Howard the Duck No. 1 is practically worthless. You'll need to go farther back to an issue of All Star Comics No. 1 in order to make that "waterless" East European family sit up and take notice.