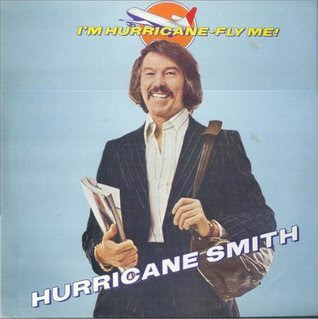 I would like to take a moment to mark the recent death of Norman "Hurricane" Smith. Now, he's not exactly well-known or worshipped throughout the music world (other than having been the engineer on about 180 Beatles songs)-- and he's pretty much the definition of a "one hit wonder". However, some of the best music we have was the result of a "one hit wonder" and that's frankly one more hit single than most of us are ever gonna have. The reason I'm taking particular notice of this one is because Hurricane Smith happens to be the singer of my very first favourite song in my lifetime. The song was "Oh Babe, What Would You Say" and it was a sizeable hit around the time I was four years old. And yes, this is the first song in my life I can remember referring to as my "favourite song". Now, what usually happens is we hear a favourite song from our childhood and cringe in embarrassment -- HOW could I have liked THAT?!?!?! But not with this song. It's as catchy and downright sweet as a song can get -- and I still get a warm feeling inside when I hear it. While the sound of the song mimics old-fashioned songs from the 1920's, the lyrics are romantic, sweet and sometimes quite sad (as many 70's songs were). So here's to Hurricane Smith: you never made much of a splash in the music world but for one brief moment you made a song which made a mark -- particularly in this music lover's heart. Let's all sing it once, shall we?

"As I have hoped for half a chance
To even ask if I could dance with you, oo oo
Would you greet me or politely turn away?
Would there suddenly be sunshine on a cold and rainy day?
Oh, Babe, What would you say?
For there are you sweet lollipop
Here am I with such a lot to say, hey hey
Just to walk with you along the Milky Way
To caress you through the night time
Bring you flowers everyday
Oh Babe, What would you say?
Just so, Baby I know
I know I could be so in love with you
And I know that I could make you love me too
And if I could only hear you say you do, oo oo oo oo
But anyway
What would you say?"

Labels: cerpts that live in the past, Death, music

Dude, is that Ron Burgundy?

Sorry to hear about Hurricane Smith. He also did a song for one of my favourite unknown 70s spy films, Innocent Bystanders starring Sir Stanley Baker and Donald Pleasance.