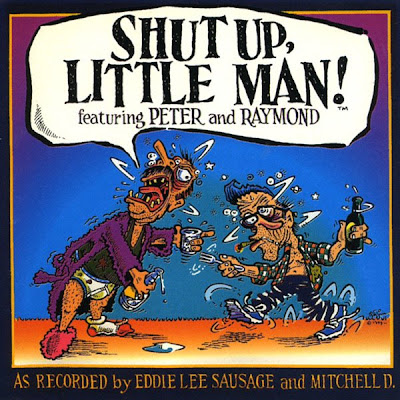 SHUT UP, LITTLE MAN! I have just experienced something which I'm at a loss to wrap my mind around. Peter and Raymond. These two guys are on a little cd called "SHUT UP, LITTLE MAN!" and they never even knew it. OK, let me start at the beginning. Two guys named Eddie Lee and Mitchell moved into a rundown, bright pink apartment building in the Lower Haight district of San Francisco. They called it the Pepto Bismol Palace. Anyway, soon after moving in they began hearing their two neighbours Peter Haskett and Raymond Huffman through the paper-thin walls. Peter and Raymond were on the far side of middle-age -- they were raging alcoholics -- and they were often violent. The two men had almost constant screaming matches periodically punctuated by fist fights. At first Eddie Lee and Mitchell were kinda spooked and freaked out but they soon began tape recording the fights through the paper-thin apartment walls. They then passed out the tapes amongst their friends. Eventually, the editor of San Francisco's Bananafish magazine contacted the two men after getting ahold of their Peter and Raymond tapes. In 1993, they were released commercially as a "Best Of" cd called "SHUT UP, LITTLE MAN!": derived from the constant insult Peter would yell at Raymond. The cd has developed a cult following and I just got ahold of one today. There has since been something like 7 volumes of Peter and Raymond cds released. Raymond Huffman died in 1992 and Peter Haskett died in 1996. But their chaos marches on. This cd is oddly compelling, laugh-out-loud funny and mildly disturbing -- all at the same time!!! Especially because all you are hearing is absolutely real while the two drunks are unaware they are being taped. Here is a sampling of some of the quintessential track titles: "If You Wanna Talk To Me Then Shut Your F****n' Mouth", "I Despise All Queers", "Go To Bed: Fist Fight I", "Someday I Will Kill You", "You Always Giggle Falsely", "We'll Set Your Hair On Fire", "This Time I Attack" and "You Wanna Stick Me With That Fork?" Seriously, these recordings have to be heard to be believed -- and you probably STILL won't believe it -- they're jawdropping and addictive! And yes, believe it or don't, in 2002 there was even an independent film made of Peter and Raymond called "SHUT YER DIRTY LITTLE MOUTH!". And if Fink would get off the stick and stop being coy and show me how to post audio on this blog, I would put up a sample so you could hear it. You listening, Finky boy?!?!?!?!?
HOLD EVERYTHING!!!! SHUT UP, LITTLE MAN! UPDATE!!!!! OK, it just gets better and better! First of all there apparently is a SHUT UP, LITTLE MAN website and here it is click here!
And besides that there's a little something I neglected to mention before. Several times during the recordings, there is a third guy named "Tony" who sometimes appears. Well, apparently Tony was some vagrant who was also Peter's lover -- this would probably account for Raymond's endless "anti-gay" tirades. Well, according to wikipedia -- and this just gives the whole mess an even more bizarre angle -- "Raymond Huffman died in 1992 , he was repeatedly kicked by Tony while lying in bed, and soon died from the trauma. Peter died in 1996 of liver problems due to years of excessive drinking. Tony was placed into a mental institution and his current whereabouts are unknown". Feel free to say "Holy shit" at this point. Well, even though Tony is NEVER heard yelling or objecting to anything during the fights between Raymond and Peter, apparently one day he finally had enough of the "gay baiting" and went bananas. Kinda gives the whole SHUT UP, LITTLE MAN! scenario even MORE of the fascination of a car wreck, doesn't it?????
Posted by Cerpts at 11:59 PM

It won't matter anyway if Fink does show you cause i can't hear his Dave Matthews clip. Keeps coming up as a broken link on two computers at my house.

I haven't tried it at my house but it worked ok here at work. Which is strange. But what can one expect from a patchy marmoset like Fink!

And since it's a Dave Matthews clip, COUNT YOURSELF LUCKY you can't hear it!

seriously? do you have media player 10? cause it should work. crap, it is a good tune too.

I believe that was the first time "patchy marmoset" has ever been used on this blog!

But it WON'T be the last!