SO YEAH....THE BITCH IS 40. And I see he's now also stolen my Five Songs idea over there on his blog. That's OK. I'm used to inspiring the world with no monetary recompense. But since it's his birthday, I'll let him slide. Oh, by the way, here's a recent photo of him and me. Frolicking. 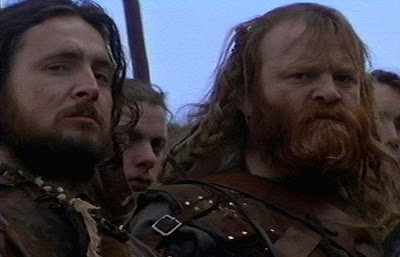 So, taking a page from his EXTREMELY OLD NOW book, I thought I'd make a little listy of songs that remind me of my Doddy -- that reprobate I call my friend. I've known him for 23 years so I think there should be a few. Now, I'm not really gonna go on and on about them -- I'm just going to list them without comment. Suffice it to say that I can't really hear any of these songs without immediately thinking of the Oot! The Donger! Granpa Strohman. The ole Sweet Cheeks. Here they are in no particular order:

And in the spirit of benevolence, I even spared him mentioning that OTHER song (J.F. and A. B. B.) in order to spare him the embarrassment. I'm sure there are other songs but this pretty much gives you an idea. So once again, here's wishing the Doddy a Happy, Happy 40th -- your "Happy Birthday" in 74 different languages is in the mail!

Well, I am truly honoured and touched. Yeah I mean touched riiiiight there!

DON'T TOUCH DOWN THERE!