THIS MORNING I FOUND ON MY COMPUTER MSN ENTERTAINMENT (WHATEVER THAT IS) LISTING THE 100 GREATEST FILMS EVER. 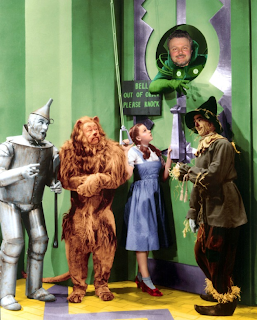 Being a ravening film buff, I naturally clicked on it to see what sage pronouncements MSN would make on the history of cinema already!  Naturally, I wasn't expecting much and I was surprised when I got there to find that -- well -- they immediately contradicted their own banner headline by saying that they weren't listing the "greatest" movies but only movies they "love".  Even though the header for the article said "Greatest".  Fair enough.  But why the misleading, disingenuous headlline.  To rope in dopey film buffs like me.  But so what.  A list of "movies we love" is just as valid -- as long as we know that from the beginning.  I did my own "favourite film" list on this blog about 5 years ago -- holy cats, has it really been that long?  I'm sure the list would be completely different now!  And naturally, being MSN, we learn quite soon that their criteria is mainly that films we love generally have to be in colour and American-made.  We (and MSN Entertainment's "cadre" of contributing movie writers and critics - none of whom I've ever really heard of) don't really "love" films with pesky subtitles!  And their lead editor Kent Laird (who writes the skimpy intro to this list) tells us:  "While it is impossible to come to an organized and fair consensus on what the best movie of all time is, it's much easier to reach into our psyches and pull out movies we love."  Well, not really.  Actually, it should be no "easier" to pick favourite films than to pick the greatest films of all time; that is, unless you have no idea how to judge quality in film-making -- in which case, you really shouldn't be making movie lists in the first place!  In fact, I would probably find it much easier to list the 100 greatest films ever made because it's much harder (in my opinion) to subjectively list which 100 films I love above all others than it would be to rationally list the "greatest" films of all time -- a list which would probably almost write itself if I were to try it . . . and I just might before too long.

But regardless, we movie buffs love our lists and this one, like all others, will be totally devisive and argument-producing.  Like, for instance, the fact that there is a rather high quotient of films I can't stand on it:  pure shit like FORREST GUMP springs to mind.  There are also films which I personally don't really care for but whose appearance on this list I can understand:  2001:  A SPACE ODYSSEY, LAWRENCE OF ARABIA, DR. STRANGELOVE, THE SOUND OF MUSIC, and THE PRINCESS BRIDE.  However, there are other surprising yet reassuring appearences of terrific, worthy films on the list which warm my heart to see:  BRAZIL, ONLY ANGELS HAVE WINGS, TROUBLE IN PARADISE, THE EARRINGS OF MADAME DE... (somebody must've bought them a film book) to name a few.  But then we get to the mindboggling choices which ... well, I'm sorry but the 2009 STAR TREK?!!??!?!?  On a top 100 list?  It's not even on my top 100 list of science fiction films.  Neither is is even the best STAR TREK film; one need not even leave the original cast films to find better cinematic experiences with STAR TREK IV and STAR TREK II.  My main reaction upon seeing the 2009 STAR TREK was that it wasn't as bad as I thought it would be.  But here it is on a top 100 film list along with other such dopey and baffling inclusions as HARRY POTTER AND THE PRISONER OF AZKABAN (which I found to be one of the least enjoyable of that series while the book, paradoxically, was the best I've read --although I've only read the first five -- I worked in a bookstore from 2000 to 2006 so it was pretty much required reading), CLUELESS (really?!?!?!?),  or Baz Luhrmann's MOULIN ROUGE?!?!?!?!  I'm sorry but even a list of "most loved" films . . . well, I wouldn't expect those to appear on it in a million years especially when I could name probably dozen of much more celebratedly-loved movies which do not appear anywhere on this list.  GONE WITH THE WIND -- a film I actually rather hate -- is nonetheless substantially much more loved by movie fans than the 2009 STAR TREK, fer Rhett's sake!  And it somehow didn't make the list of 100 over Baz Luhrman's MOULIN ROUGE?!?!?!  But that's as may be - here is MSN Entertainment's list of "our favorite movies of all time" according to their lead editor Kent Laird.  Sadly nowhere does he gives us any idea of what criteria was used to come up with this list.  Possibly they threw a bunch of DVDs up a staircase and arrived at it that way.  Let's face it, there's a substantial amount of drek here on a list purporting to be the 100 anything.  In the drek category I would include GLADIATOR, BACK TO THE FUTURE, and TERMS OF ENDEARMENT of which I have seen and am not a fan.  Also, the presence of such films as WALL-E and THE INCREDIBLES (over, in my mind, much more beloved and classic children's films) leads me to believe that some of MSN Entertainment's film critics polled must've been about four years old.  But however they went about it, here's their list.  Let the gnashing of film buff teeth commence:

23 of those films would certainly appear on my list of 100 "favourites" and I make no apology for saying that both LAWRENCE OF ARABIA and 2001 would be among them.

LAWRENCE OF ARABIA is a film I've watched probably four times; each time trying to like it but only ending up bored silly. I seem to have that reaction to all David Lean's "epics"; give me BRIEF ENCOUNTER anytime. And as for 2001; I used to despise it but now I've mellowed and only dislike it.

In the interest of accountability I should probably spell out the following: of all the films on this list there's only one I consider pure shit and that is FORREST GUMP.

As for the films I don't personally care for they include LAWRENCE OF ARABIA, DR STRANGELOVE, THIS IS SPINAL TAP, 2001, SOUND OF MUSIC, THE PRINCESS BRIDE, TERMS OF ENDEARMENT, CLUELESS, A CLOCKWORK ORANGE, BACK TO THE FUTURE, WEST SIDE STORY, TAXI DRIVER, STAR TREK and GLADIATOR.

All the rest I like. But what use a favourite film list is without STRANGE BREW on it, I don't know!