NEW YEAR'S EVE. As we prepare to put 2008 safely in our rearview mirrors, we can only take a deep breath and hope that 2009 is a little less rough for all of us. Most people I know have been through a hell of a lot this year and I just wanted to wish you all a much better new year. Coincidentally, this just happens to be the 600th post on this blog and in the spirit of new beginnings I'd like to start right here with a little feature I hope to continue all through 2009. Here goes... 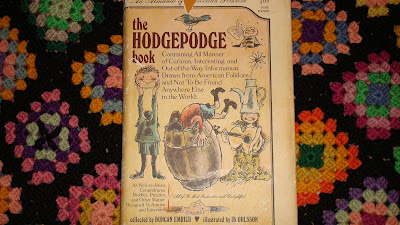 One of my favourite books as a kid was the Duncan Emrich compiled treasure trove called THE HODGEPODGE BOOK (seen here on a background of a quilt my grandmother made before I was even born) which contained, according to the cover blurb, "all manner of curious, interesting, and out-of-the-way information drawn from American Folklore". It was this book that probably peaked my interest in folklore very early. In the author's own words: "There are things in this Hodgepodge which are very, very true, or almost always true. For example: 'A bee never gets wet', or 'Rain before seven, stop before eleven,' or 'A penny saved is a penny earned.' Then there are other things here which are true, but in a different sort of way. Examples: 'A ghost is never seen without mittens,' (Have you ever seen one without mittens?), or 'If you can keep your tongue out of the hole where a tooth has been pulled, a gold tooth will grow in its place'. And then there are other things which are halfway between. You can believe them or not. 'If you want to get rid of your freckles, wash your face with buttermilk'..." And so on. The book, then, is filled with old-timey wisdom and folklore which to my mind always evoked the Victorian age and VERY early 20th century. Think of the movie "Meet Me in St. Louis" and you've got the image. So I hope to dig out folky wisdom throughout the year appropriate to the time or season and post them here for your amusement or edification. And since this 1972 out-of-print book was written for children, you can share these with the little munchkins in your life. 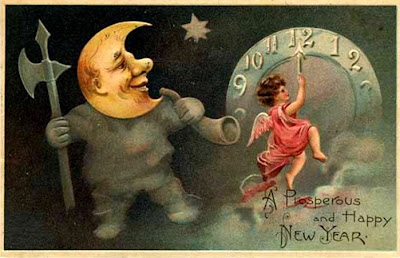 That leaves us with New Year's Eve. That's where I'm going to start. According to The Hodgepodge Book:

There you have it; straight from The Hodgepodge Book which, again according to the author, emphasizes "...beliefs and superstitions . . . customs and traditions belonging particularly to children and which contribute to making up their very special and delightful world". I hope these wonderful, old-fashioned excerpts will appeal to the child in all of us. Join me back here tomorrow for New Year's Day!