PART QUATRE OF OUR LOOK BACK AT THE DECADE OF THE SEVENTIES.  This time we point out some groovy covers from 1973! 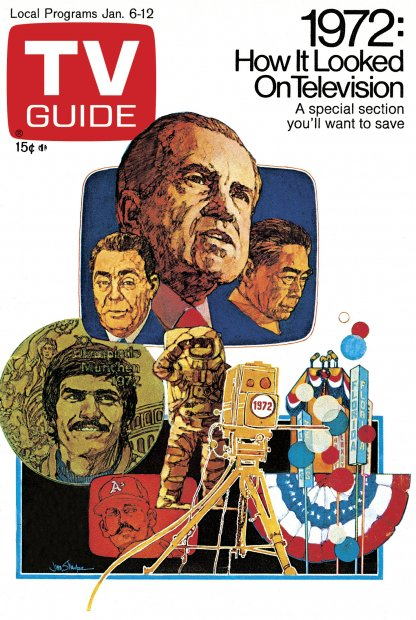 Once again TV Guide started the year with a look back at the previous one.  Another nice composite drawing of some of the old year's events such as Richard Nixon's China trip and treaty with the Soviet Union, another moon feller and what looks like Mark Spitz at them there Olympics.  Full disclaimer:  I hate the Olympics.  People are glued to the television set to watch "sporting events" which they would never DREAM of watching any other time of the year; unless you're a devoted year-round followers of shotputting, why would you JUST HAVE to tune in to every minute of the it during the Olympics.  However, back to Mark Spitz . . . I do remember having a Mark Spitz poster on me wall when I was a kid at this time.  I also remember it wasn't me that bought it or even asked for it.  It's one of those peculiarities of parenthood that they'll buy something for you which you have absolutely no interest in.  I can just picture my little 7 year old self staring at that poster thinking "I've lived with 'em for seven years -- can they STILL have no idea who I am?!?!?!"
THE WEEK OF  JANUARY 20 - 26 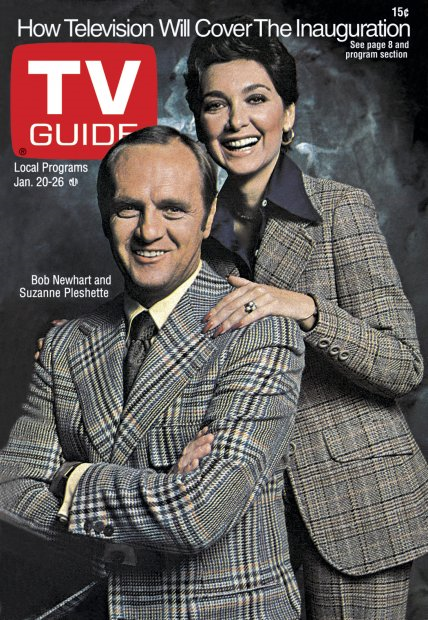 Back to those weekend nights at my grandparents' house after my bath and tuning into MARY TYLER MOORE; well, following that I believe was THE BOB NEWHART SHOW.  Another huge favourite of mine aided no doubt by the fact that I had another of those childhood crushes on Suzanne Pleshette!  Oh yes, and once again my favourite episode of Newhart's show is a Thanksgiving one also:  "Over the River and Through the Woods" a.k.a. "Moo Goo Gai Pan".  And by the way, those two suits Bob and Suzanne are wearing would've fried the reception on our 1970's television set!
THE WEEK OF FEBRUARY 24 - MARCH 2 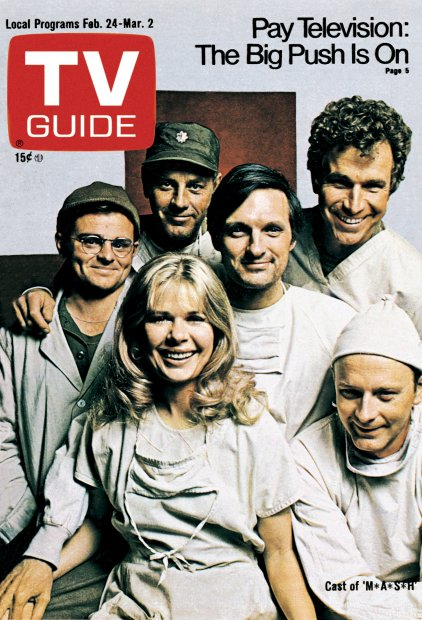 Here we have another of my "comfort TV" shows:  M*A*S*H*.  At least the first half of the series before they got a little too serious for their own good.  However, when the show was funny it was FUNNY!  Once again we also have a TV show based on a movie (i.e. THE ODD COUPLE) in which I much prefer the TV show to the movie.  During one of the worst periods of my life when I couldn't bring myself to listen to music or be able to watch a new movie, it was my first half-dozen dvds of M*A*S*H* that got me through it.  I was able to play episode after episode in front of my glazed-over eyes and the comfortable familiarity of each episode was the only thing which seemed to settle me down.
THE WEEK OF MARCH 3 - 9 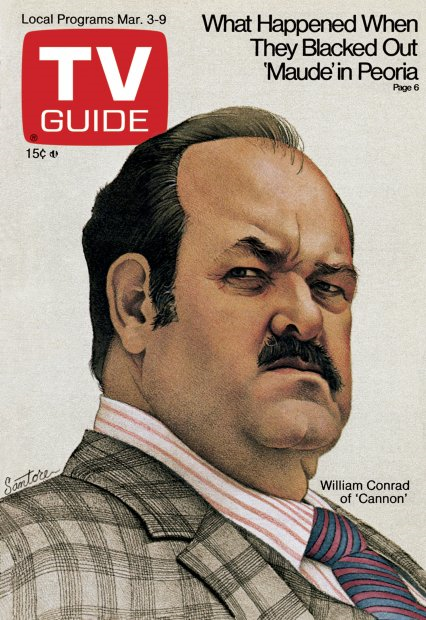 I won't start in again on how I never watched cop shows.  However, this portrait of William Conrad as Cannon is top notch!  I've always had a great liking for William Conrad; whether in his countless second banana roles in films from THE KILLERS to THE NAKED JUNGLE or from his long career acting in old time radio shows in everything from radio's half-hour of high adventure "ESCAPE" to portraying the original Marshal Matt Dillon on radio's "GUNSMOKE".
THE WEEK OF APRIL 7 - 13 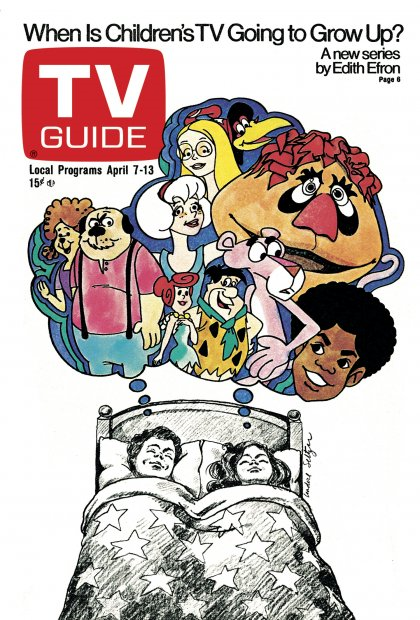 Children's television is the 70's was superb.  This statement owes more than a little to the fact that I was indeed a child during the 70's.  Even though some of the shows picture on this cover are actually from the 1960's (THE FLINTSTONES, H.R. PUFNSTUF, THE PINK PANTHER) they were endlessly aired during the 70s as well.  Early, early every weekday morning while waiting to walk down to the school bus stop, I watched LOONEY TUNES and MERRIE MELODIES on Channel 17.  Naturally, after school was another smorgasbord of UHF cartoon delights.  Channel 48 in the afternoons offered all the Hanna-Barbera cartoons (Quick Draw McGraw, Huckleberry Hound) as well as Casper the Friendly Ghost, BATTLE OF THE PLANETS (Go G-Force!) etc.  Channel 29 showed that other Japanese import STAR BLAZERS and, I'm pretty sure, SCOOBY-DOO, WHERE ARE YOU?  Channel 17 had those old 60's superhero cartoons of Superman, Batman, Aquaman (and even the occasional rare ones like the Justice League of America) as well as more dubbed Japanese cartoons SPEED RACER, ASTRO BOY and MARINE BOY.  And of course, Saturday morning cartoons were all encompassing back then.  It sure was great to be a kid back in the 1970s.
THE WEEK OF APRIL 28 - MAY 4 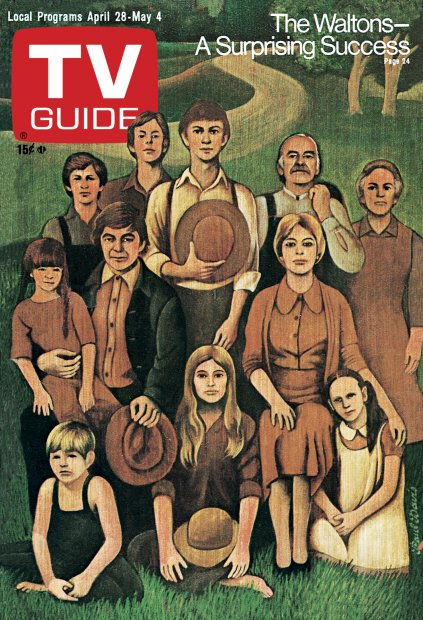 There's an odd pattern emerging here of my choosing covers to shows I never watched.  Nope, never watched THE WALTONS either!  Although, I think I did see one episode:  the one with the Hindenburg in it.  Other than that, my only other close encounter with THE WALTONS was reading the Mad Magazine parody "THE WALLNUTS".  Or was it CRACKED magazine???  However, this is a very striking, interesting cover art, dontcha think?
THE WEEK OF JUNE 2 - 8 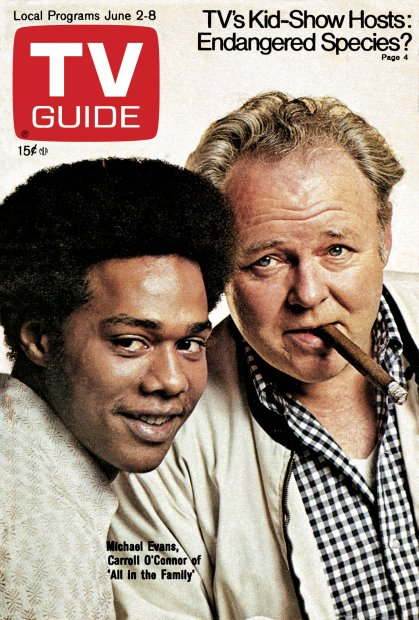 Back to one of my all-time favourite comfort TV shows:  ALL IN THE FAMILY.  Archie and co. were ruling the roost on television by this time as a major cultural touchstone.  Here we have a nice portrait of Mike Evans and Carroll O'Connor.  Does everyone know that not only did Mike Evans portray Lionel Jefferson but he also co-created the show GOOD TIMES?
THE WEEK OF JUNE 16 - 22 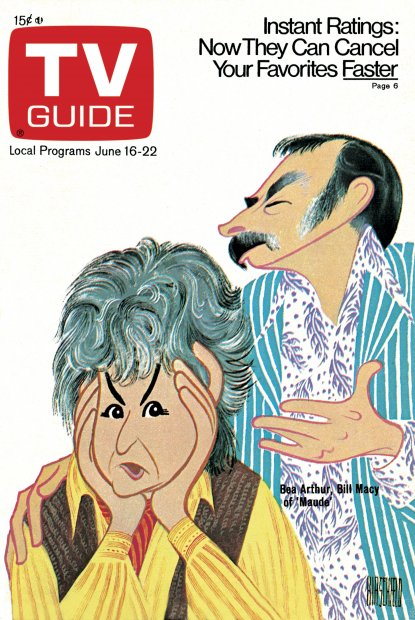 ALL IN THE FAMILY had a truckload of spin-offs; one of them being MAUDE.  This superb Hirshfeld caricature of Bea Arthur and Bill Macy just had to make my list of great covers.
THE WEEK OF JULY 14 - 20 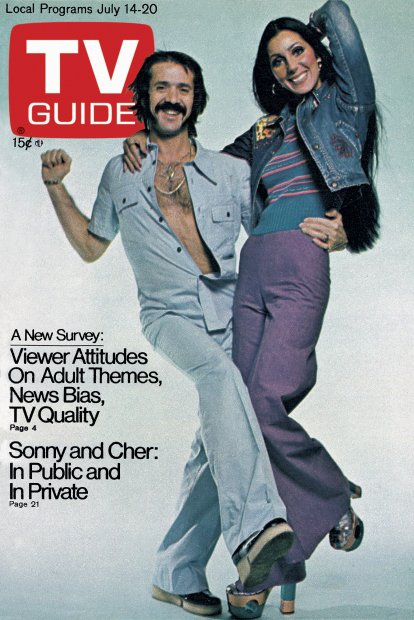 Was THE SONNY & CHER SHOW a summer replacement?  I don't know but I seem to remember me strolling over to my little girlfriend Mary Beth's house on warm summer evenings to watch it with her.  Dig Cher's platform shoes!  Oh, and close your shirt, Sonny!
THE WEEK OF NOVEMBER 10 - 16 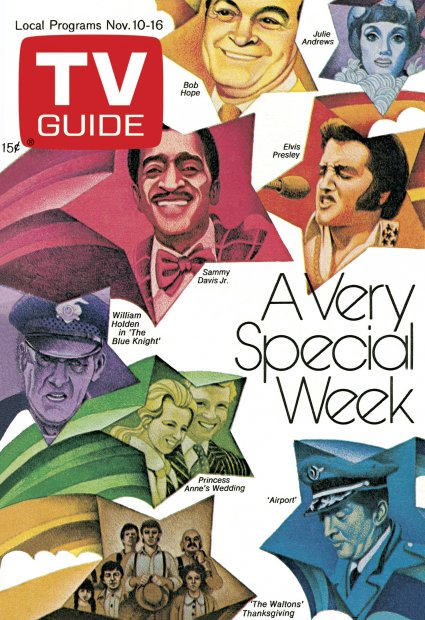 Here's another of those boffo "everything but the kitchen sink" TV GUIDE covers depicting the wealth of star-studded spectacle offered during Fall sweeps week, no doubt!  That's a ton of specials going on there including ole Dino in the (I assume) television broadcast premiere of the new movie "AIRPORT"!
THE WEEK OF DECEMBER 15 - 21 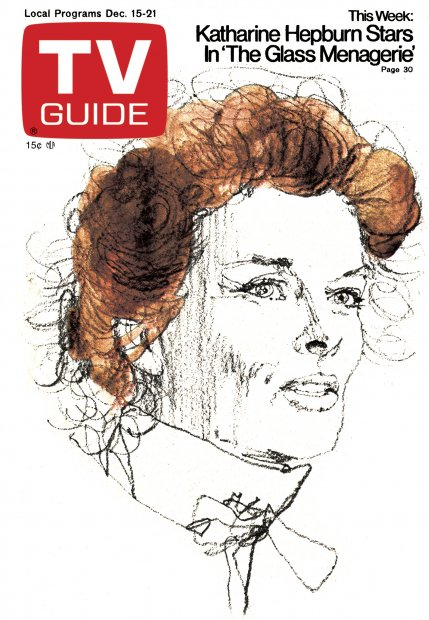 I am a huge fan of Katharine Hepburn; she's my favourite film actress full stop.  So imagine my delight seeing her on the cover of the TV GUIDE running up to Christmastime in 1973.  This is a pretty terrific drawing of her, too.  "THE GLASS MENAGERIE" is indeed an excellent filmed play and happily is available on dvd.
THE WEEK OF DECEMBER 22 - 28 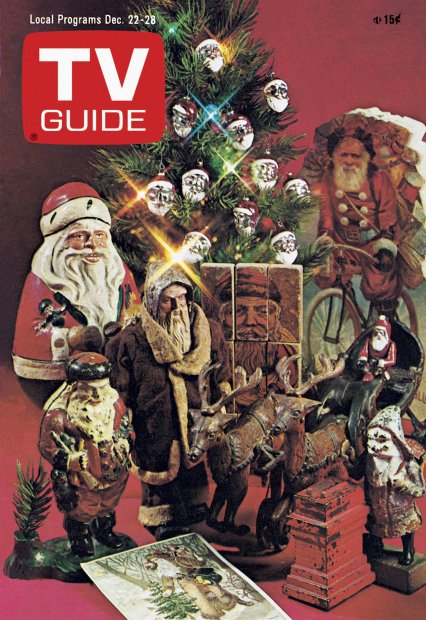 And this brings us to that very time of Christmas 1973.  Here we have a nice little collection of Santa chotsky on the cover.  I'm sure this very issue sat on the end table in my grandparents living room near the shiny silver aluminum Christmas tree which had a spotlight shining on it through a rotating disc of many colours!﻿
Posted by Cerpts at 2:00 AM

If you want your ex-girlfriend or ex-boyfriend to come crawling back to you on their knees (no matter why you broke up) you must watch this video
right away...

(VIDEO) Win your ex back with TEXT messages?