ON JANUARY 25, 1977, WE MOVED FROM MY CHILDHOOD TOWN OF MAPLE SURPLE (THE ONLY SURVIVING ALIEN COLONY ON EARTH) TO CLAYTOWN.  I was eleven years old and leaving the only hometown I'd ever known for a new one was quite a change.  While I did (and still do) have a nostalgic fondness for the old little town, the new bigger, somehow more "modern"-feeling town was an adventure and I immediately liked it.  I recall that on the first night in the new house, with everything still in boxes piled against the wall as the sun went down, we ordered some takeout (I'm pretty sure it was pizza), plopped the TV down on the bile-green-carpeted floor and watched TV.  There was no cable TV so the shows came in through the TV's aerial and the watching of old, familiar programmes provided a continuity from the old way of life to the new. 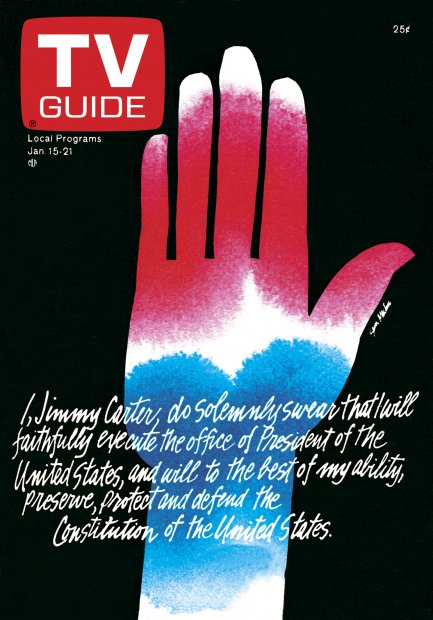 Before moving to the new house, however, we got a new President.  Changes all around.  We went from fumbling Ford to cheery Carter.  The ridiculously huge "Osmonds" grin and the fact that he was a Washington outsider sent a rush of optimism through the land as it seemed we were leaving the Vietnam/Watergate era behind.  Carter invented the now-traditional walk down Pennsylvania Avenue on inauguration day which really cemented him as "a man of the people".  In only a few short years, that image would go to doom and gloom.  For such an optimistic start, this rather dark and moody cover art is oddly prescient about the coming energy crisis and hostage situation which would haunt Carter's term.
THE WEEK OF JANUARY 29 - FEBRUARY 4 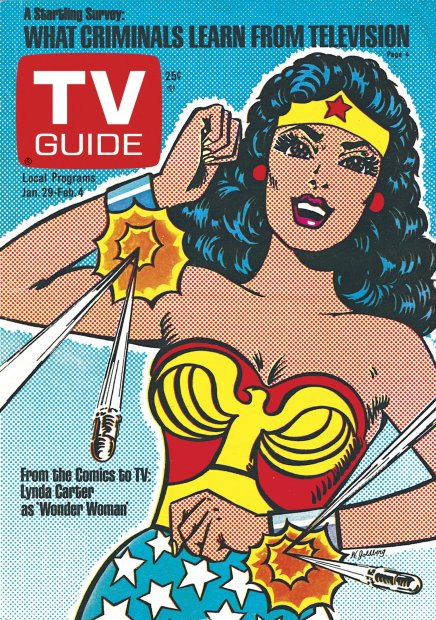 As an avid comic book fan, the rare appearance of a super-hero TV show on the tube was a thrilling prospect.  Back then, we just didn't see comic book TV shows and movies and the proliferation of them in today's culture would've been unfathomable to my 11 year old self.  However, my intense dislike for Lynda Carter cooled my enthusiasm right quick.  However, more importantly, this is the first TV GUIDE issue we got after moving into the new house.  I still remember it vividly.  I can't see this cover without immediately thinking of our first week in our new home.
THE WEEK OF MARCH 19 - 25 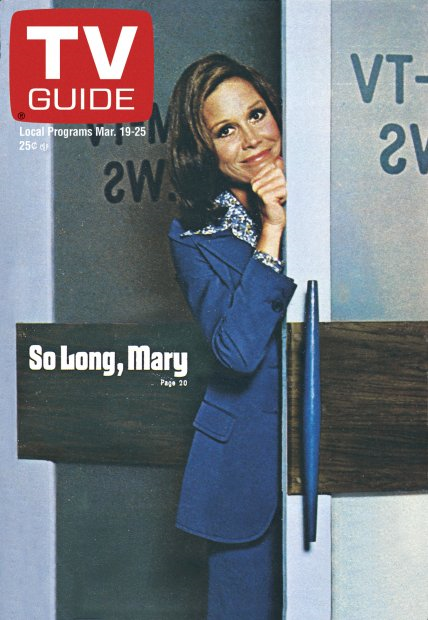 What a fantastic cover.  Mary Tyler Moore decided to end her classic show while it was still at the top.  This wistful cover photo perfectly evokes the sadness of taking our leave of that final episode.
THE WEEK OF APRIL 30 - MAY 6 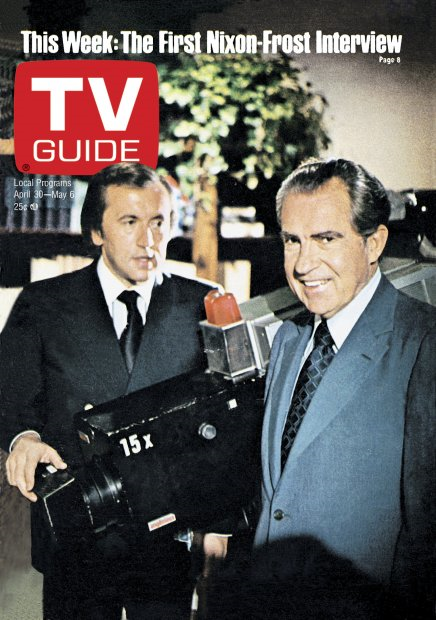 Just as you think we've put that aforementioned Vietnam/Watergate era behind us . . . I have no clear memory of seeing the David Frost interviews with Richard Nixon.  After all, I was negotiating my way through my first year at a new school and making new friends.  But as a kid who was always interested in history, I must've seen at least a little of it.  Doesn't Tricky Dick look thrilled on this cover photo?
THE WEEK OF JUNE 18 - 24 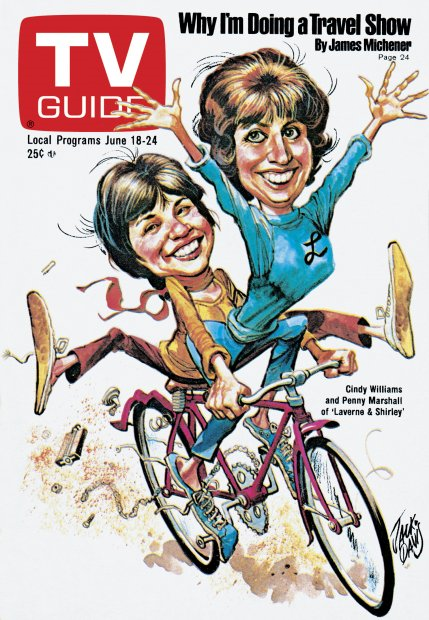 Here we have another great Jack Davis cover illustration; this time for LAVERNE & SHIRLEY.
THE WEEK OF JULY 30 - AUGUST 5 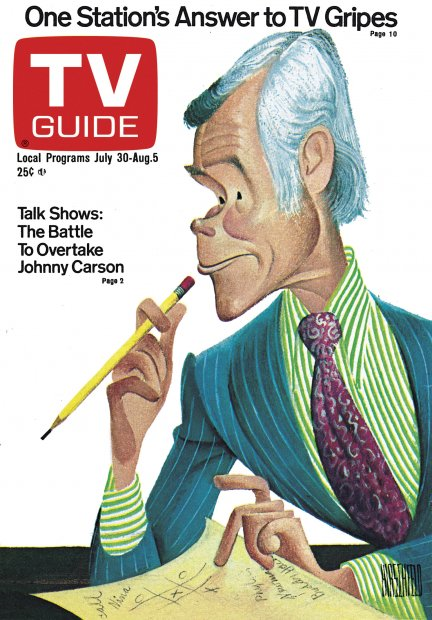 If Johnny Carson could've said to have "made it" in the previous Norman Rockwell cover, then this great Hirshfeld caricature is the icing on the cake.  By this point, in the summer months (as this TV Guide issue is from) I was beginning to stay up late enough to see THE TONIGHT SHOW WITH JOHNNY CARSON.
THE WEEK OF AUGUST 20 - 26 As I've said umpteen times in this series, I was not a "cop show" watcher -- "cop show" includes private detective shows as well in my vernacular.  As I've also mentioned, THE ROCKFORD FILES was a big exception.  I watched it quite often as I was probably captured by James Garner's irresistible charm like the rest of America.  My co-worker Angel and I were talking about how weird and unexplainable was the surprising lack of media coverage on Garner's death last year.  Such a hugely popular star should've had many more tributes than he got.  How soon we forget the immortals.  This painted cover of Garner and Joe Santos reminds me a little of that portrait of Lyndon Johnson which LBJ hated and said it looked like it had been painted with soy sauce!
THE WEEK OF OCTOBER 22 - 28 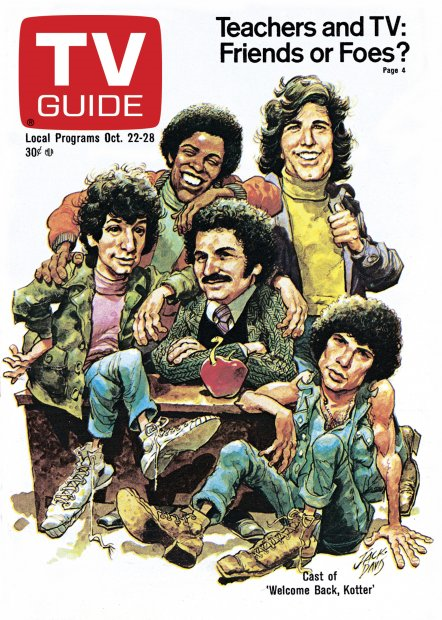 Here we have another classic Jack Davis cover portraying the cast of WELCOME BACK, KOTTER.
THE WEEK OF NOVEMBER 5 - 11 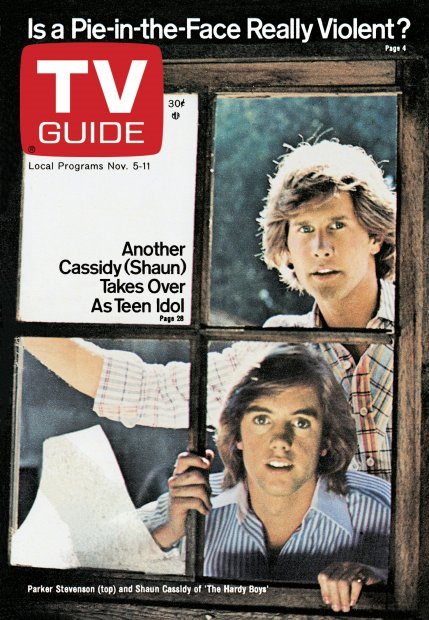 While all these other TV shows are holdovers from the past, THE HARDY BOYS/NANCY DREW MYSTERIES is the first show here which I associate with watching after that line of demarcation after I moved into the new house.  Never a huge fan of THE HARDY BOYS books (I think I had three of them growing up -- my cousin and I prefer THE THREE INVESTIGATORS books), I dug this TV show which alternated a Hardy Boys adventure with a Nancy Drew adventure the next week.  As a kid, I preferred the Hardy Boys to the Nancy Drew episodes -- I mean, who wants to watch a dumb old girl.  However, a couple years ago I got the first season on DVD and I have to tell you that the Nancy Drew episodes are usually much better than the Hardy Boys ones.  At the time (as it says on the cover), Shaun Cassidy was the huge teen idol featured on the cover of TIGER BEAT and on top 40 radio; however, my cousin Loran and I hated his guts!  She had a crush on Parker Stevenson and I just continued my crush on Lindsay Wagner.
THE WEEK OF NOVEMBER 12 - 18 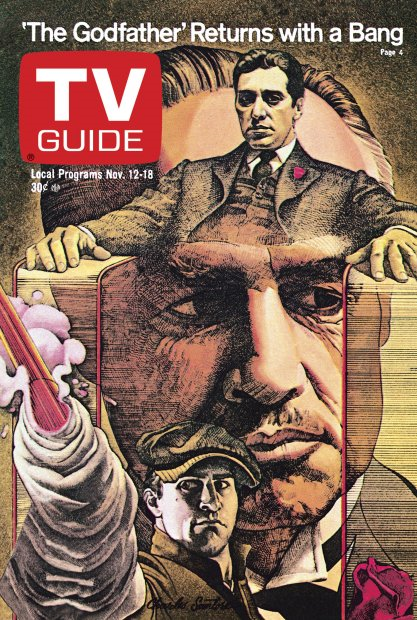 Here's a superb cover illustration for THE GODFATHER PART II.  Can this be the broadcast TV debut of the film?  If so, what took so long?
THE WEEK OF NOVEMBER 26 - DECEMBER 2 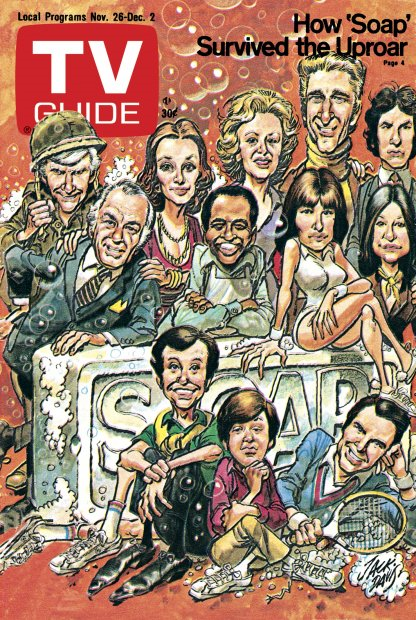 I love Jack Davis' artwork but I must admit this is not one of my favourites.  Some of the likenesses are pretty good but some aren't (particularly Katherine Helmond who looks nothing like herself here).  But I just had to use it because I was a HUGE fan of SOAP.  Again, this was years before VCRs, so I used to plop my Radio Shack tape recorder down in front of the TV speaker each week and tape every episode.  That's why I probably know every line of the first three seasons of SOAP by heart to this day!
THE WEEK OF DECEMBER 3 - 9 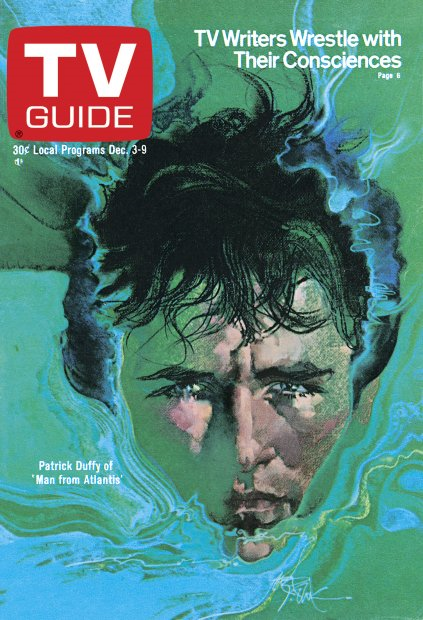 Ah, but here's a cover which I think is pretty snazzy for a show which I was indifferent about.  I watched THE MAN FROM ATLANTIS occasionally but didn't really count myself a fan.  I would've preferred an AQUAMAN series; now THAT I would've been glued to!  I can't decifer the artist's signature but it looks very "Bill Sienkiewicz-y" years before ole Bill adopted that style.
THE WEEK OF DECEMBER 17 - 23 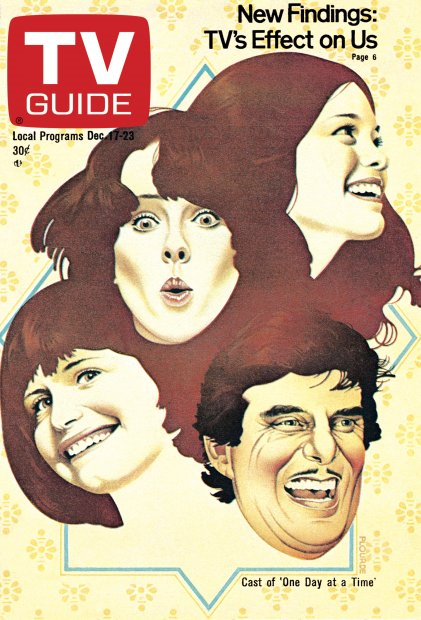 ONE DAY AT A TIME is another show which I loved at the time and never missed.  This cover art features good likenesses of Bonnie Franklin, Mackenzie Phillips, Valerie Bertinelli and Pat Harrington with quite some xaggerated facial expressions.
THE WEEK OF DECEMBER 24 - 30 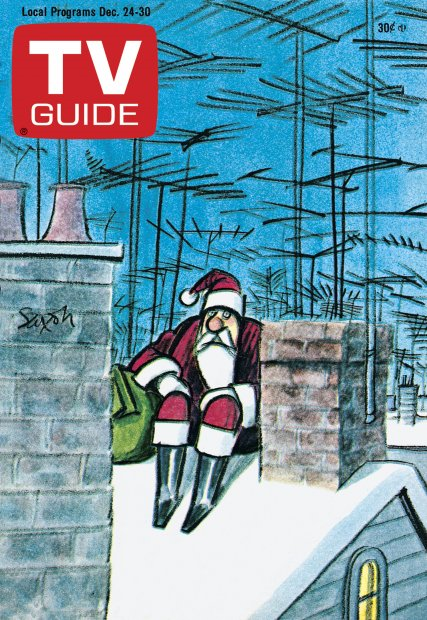