WE NOW SAIL INTO MID-DECADE WITH MY FAVOURITE TV GUIDE COVERS OF 1975.  1975 was a pretty good year; it was, after all, the year I turned 10.  You probably don't know this unless you were there but the 4th of July fireworks were kept smaller and more sedate this year because they were saving up the big boffo display for the following year when the Bicentennial would be celebrated.  Other than that, there was nothing disappointing about 1975.  While I was rather young to go to the movies very often, the TV, comic books and music were fantastic.  UHF was full of classic reruns and the new shows of that year are what we now regard as classic TV.  Saturday morning cartoons were king and, when they ran out and some dumb grown-up sports programming like golf came on, one changed from network TV to UHF for an entire afternoon of horror movies (CREATURE DOUBLE FEATURE on Channel 48 or Dr. Shock's MAD THEATER and HORROR THEATER on Channel 17) as well as all those B&W movie series like MA AND PA KETTLE, BLONDIE, FRANCIS THE TALKING MULE and all the ABBOTT & COSTELLO movies.  FAMOUS MONSTERS OF FILMLAND magazine was still ruling the newsstands, CBS RADIO MYSTERY THEATER hosted by E.G. Marshall still haunted the radio waves and pet rocks, Black Jack gum and YOU'LL DIE LAUGHING trading cards ruled my heart! 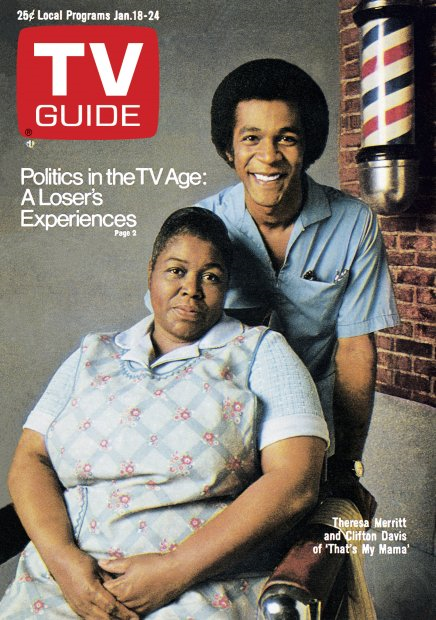 Another show my grandmother and I never missed was THAT'S MY MAMA.  I'm pretty sure I haven't seen it since it was originally broadcast but I'd sure like to see it again!
THE WEEK OF FEBRUARY 8 - 14 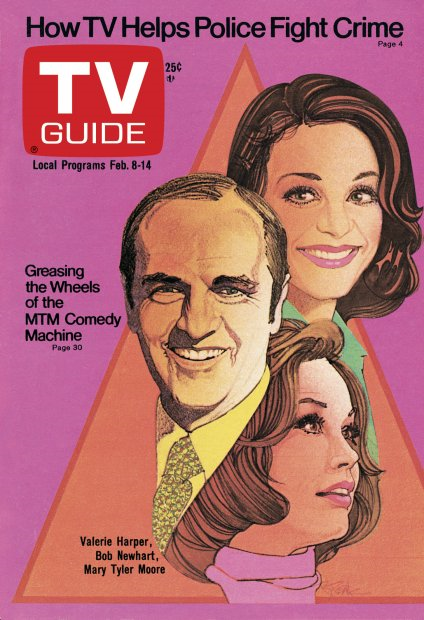 A nice triptych cover of Valerie Harper, Bob Newhart and Mary Tyler Moore.  Apparently the "MTM Comedy Machine" was a topic of conversation in this issue.  Indeed, Mary Tyler Moore's production company had a stellar list of bona fide hit shows by this point and I watched them all.  I've mentioned before the nights staying over my grandparents' house when our evening's TV watching began with MARY TYLER MOORE and continued into THE BOB NEWHART SHOW.  And, of course, after RHODA spun off from Mary's show, Rhoda's two-part wedding episode was the most-watched up to that time.
THE WEEK OF MARCH 1 - 8 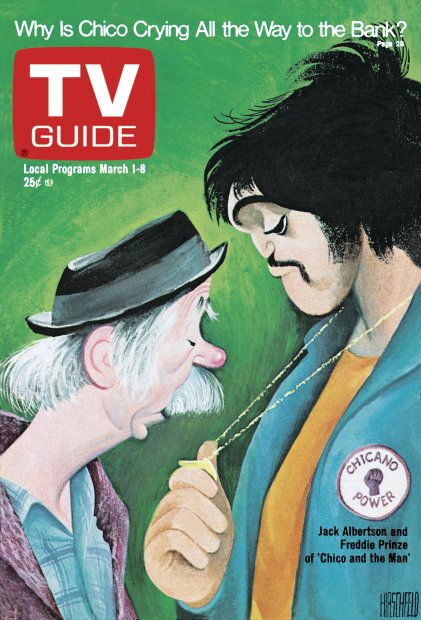 Back to CHICO AND THE MAN with this wonderful caricature cover by Hirschfeld.
THE WEEK OF JUNE 21 - 27 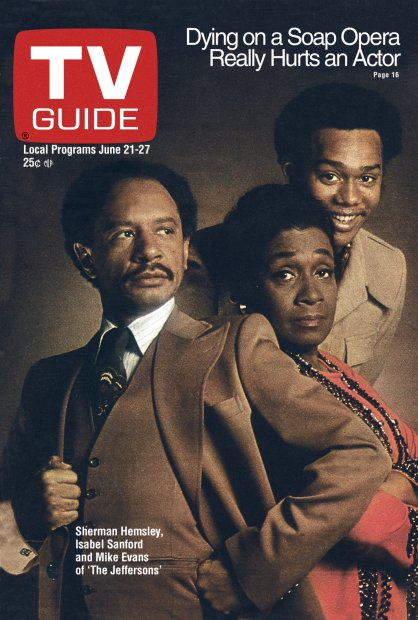 Yet another monstrously-successful spin-off by Norman Lear was THE JEFFERSON and here's another show I never missed.  Here's a terrific family portrait cover of Sherman Hemsley, Isabel Sanford and Mike Evans.  The Jeffersons' apartment was another of those iconic sets which I felt like I was physically visiting each week when the show went on the air.  Many of these old 70's shows had sets which I knew as well as my own living room!
THE WEEK OF JULY 5 - 11 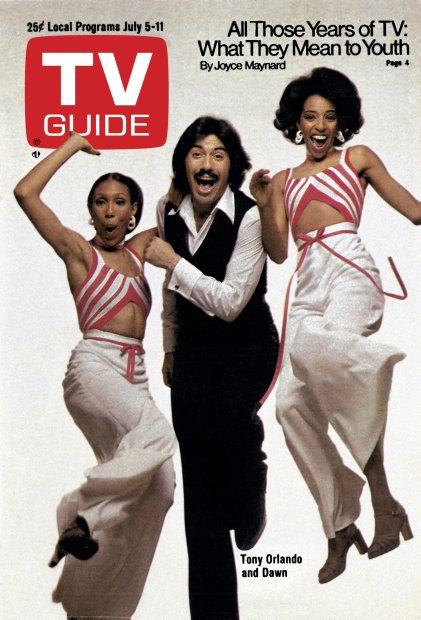 Oh yes, this was around the time when variety shows began to take off in the 70s once again.  Before long, the TV schedule was littered with variety shows; some would last and some would be gone in a matter of weeks.  Tony Orlando and Dawn were flying high after there multi-kazillion-selling hit single "Tie A Yellow Ribbon ('Round the Old Oak Tree)" and they were given a variety show which, believe it or not, was quite fun as well as funny if memory serves.  I certainly watched it.  All three revealed a deft hand at comic timing and Telma Hopkins would continue on in sitcoms after the pop music thing had cooled:  most notably as a cast member on BOSOM BUDDIES.
THE WEEK OF JULY 12 - 18 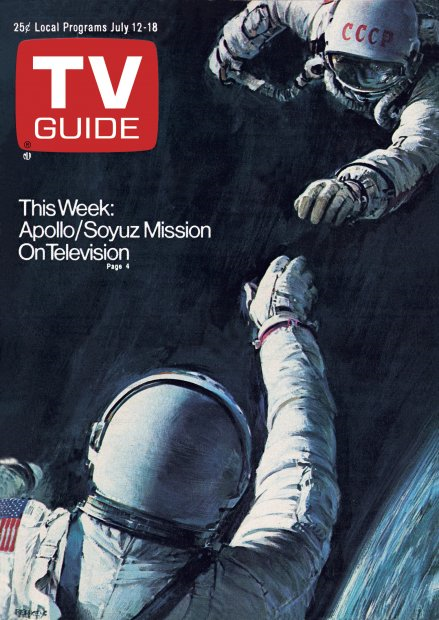 The linkup between the U.S. Apollo and Soviet Soyuz spacecraft was huge news and this moody painted cover commemorates all the hubbub.  Around this time, my grandfather and I briefly collected stamps and I have the original U.S. Post Office stamps of the Apollo/Soyuz linkup to this day.
THE WEEK OF JULY 19 - 25 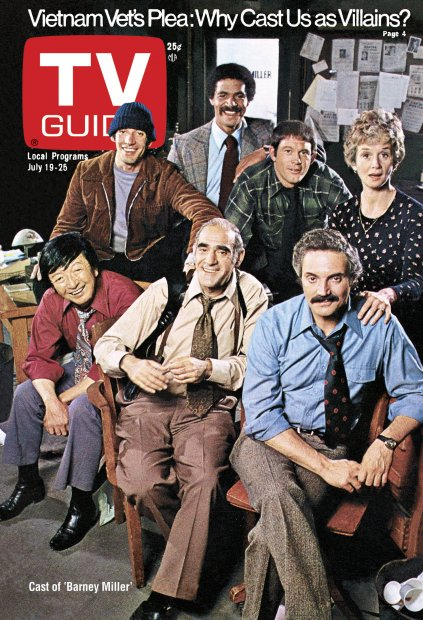 Another great ensemble cast was featured in the cop comedy BARNEY MILLER.  I never missed this long-running comedy either and here's a terrific group portrait.  And I think my favourite, funniest episode is the one entitled "Hash" which concerns the entire precinct consuming some "suspicious brownies" baked by Wojo's new girlfriend.  Fall on the floor funny.  "Mooshey Mooshey!"
And we'll continue soon with the year 1976 . . . right after we hear from tonight's Bicentennial Minute.
Posted by Cerpts at 10:45 AM