DESPICABLE! Yes Oprah, there is something even MORE despicable than O.J.'s book -- and that is what I found when I watched the new 20th Century Fox Midnight Movies double DVD of Tales From the Crypt/The Vault of Horror. 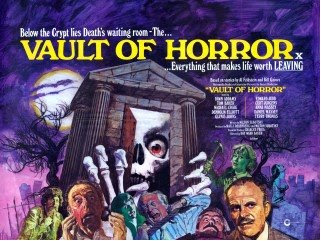 Now don't get me wrong; the idea of Fox finally releasing these two movies perfectly suited for a double feature dvd is to be applauded. And, upon viewing the first DVD of Tales From the Crypt (1972), I was pleasantly surprised to see not only an excellent print but several of the cut "gore" scenes (although extremely tame by today's standards) put back into the film for this release. All previous prints of Tales from the Crypt were missing these scenes and it's nice to see them restored.

So, imagine my horror when, upon viewing the second disc, I found The Vault of Horror (1973) to be a horribly mutilated and butchered print which not only cuts out several of the (again tame by modern standards) "gore" scenes but cuts them out apparently with an axe!!! For those of you not familiar with the film, it is an "omnibus" movie consisting of 5 separate stories with a wraparound sequence. The first time I noticed something was terribly wrong with this print was the scene pictured below in which Daniel Massey, after murdering his sister, stumbles into a restaurant full of vampires. Said bloodsuckers eventually discover Massey is human and, upending him, shove a spigot in his neck and serve his blood "on tap" as it were. And it were. Every version I've ever seen of this movie (including ANOTHER copy I already own) show this happening; no big deal. Really, I've seen worse on commercial television. But, in the new Fox DVD, when the camera SHOULD cut to the scene 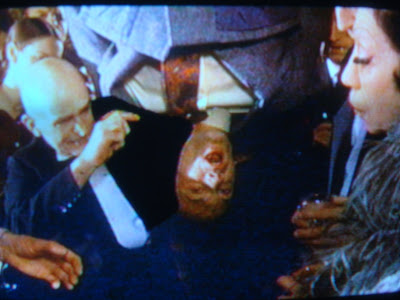 showing Massey hanging upside down with a bald vampire pouring blood into a glass from the tap in his neck, there is an INCREDIBLY JARRING AND INEPTLY INSERTED STILL PHOTOGRAPH accompanied by suddenly loud chopped-in music. A still photo, for Pete's sake -- as if this film was a slideshow and not a MOTION picture!!! This still photograph is on screen for AT LEAST 5 seconds (and here it is in a screen capture from the very DVD I took myself -- click on it to see it REAL BIG). Notice that the bald vampire appears to simply be pointing his finger into a black space -- which literally looks like someone either colored in the film frame with a black magic marker or else cut a piece of black paper and pasted it over top of the frame. Literally the still photograph appears to have been pasted in with Elmer's Glue. Daniel Massey's left ear is even covered by it, fer goshsakes!!! It boggles the mind how a MAJOR company like 20th Century Fox can release such a shoddy print to DVD like this. And that's not all; it happens AGAIN during the next story in which Glynis Johns bashes Terry-Thomas in the head. The actual shot of her doing this is cut out and ANOTHER STILL PHOTOGRAPH is scotch-taped into the film reel. Later on in the film, ANOTHER shock scene is cut (where a man has his hands cut off) but they apparently ran out of glue and scotch tape since no still photo is inserted in this one; just a horribly clumsy cut and splice where the scene SHOULD be. Ridiculously, the scene that is cut shows the man's bloody stumps. HOWEVER, right before that we clearly see his amputated bloody hands drop to the floor. Now, will someone please tell me how a shot of bloody amputated hands is OK to leave in the film while the shot of his bloody stumps is not?!?!?!? One seems to be JUST as horrific as the other and, like I said, I've seen worse on any half hour horror anthology TV show since the 80's.

Now seriously, I've seen this film many times and these scenes have NEVER been cut like this and CERTAINLY never had still photos inserted into them in such a slipshod way. Where Fox got THIS particular print, God only knows, but why would they even CONSIDER putting it out on DVD. It seems to me that 20th Century Fox would quite easily be able to find ANY print of this film that would be more appropriate to release to DVD than this incompetently butchered one. Thankfully, I still have my OTHER copy of the film which is thankfully unmutilated.

Even I could have done better than that editing job.

You could have done a MUCH better job. . .I know this for a fact. . .remember, I've seen Pulp Fiction enacted by stuffed animals. . .