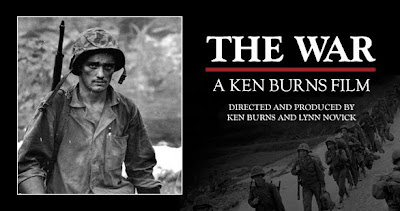 KEN BURNS' THE WAR. So, the brand new much-hyped documentary series by Ken Burns debuted on PBS Sunday night. So far, I've seen 2 nights of it and plan to watch more. My reaction so far? It's OK. Yeah, it's pretty good. I'm not going to say that I'm underwhelmed by it because I'm not really a fan of Ken Burns' work. I didn't particularly like his famous "The Civil War" series way back in the day. This, of course, has something to do with the fact that the Civil War is the ONE period in American history which bores me to tears ANYWAY so the guy was admittedly facing an uphill battle with me to begin with. And let's see, what else. Oh, his big documentary series "Ken Burns' Jazz" several years ago left me cold as well. Which is some feat considering how much I love (and am interested in) music. I tend to agree with a customer I had when I worked at the Hellmouth back when the "Ken Burns' Jazz" DVD came out: the customer said to me: "Ken Burns don't know shit about jazz!"
And perhaps this is why I don't REALLY like Ken Burns' documentaries that much. Sure, they're competently made but there's something missing in them. Something that someone who has a degree in history (like me) has a problem with. And the new "The War" documentary (about World War II in case you weren't aware of the subject matter) suffers from the same thing as well. And that is: there's precious little ACTUAL HISTORY dealt with.

Burns (who damn it all, HAS to be a hobbit. . .I mean, just look at him. That's not a slam against the guy cuz I like hobbits. I'm just sayin'.) is one of those "documentarians" (I hesitate to label him an "historian") who is convinced that history is not big events but ordinary people. His approach to World War II in this new documentary is to focus on four towns (like "Luverne" and "Mobile") and the impact the Second World War had on the real people. Which is fine. I'm not against that at all.
HOWEVER. . .one shouldn't focus almost TOTALLY on the average Joe when chronicling history. I'm sorry, no matter how much they want to elevate and glorify the common man, the actual history-making events are almost ALWAYS triggered by extraordinary people. It's sort of the difference between Ella Fitzgerald and William Hung. They BOTH sing songs. . .but it's HOW they sing songs that makes them great. Ella Fitzgerald was an extraordinary vocalist; William Hung is an average Joe who sings. One is more deserving of attention than the other. This goes for telling the story of history as well. While the common people ARE important, they usually don't have that great of an impact on such monumental subjects as World War II. Ken Burns manages to do almost the impossible; in two successive nights of his documentary on World War II he managed to ALMOST not even MENTION Winston Churchill, Adolf Hitler, Franklin Roosevelt, Joseph Stalin or any of the other figures one would THINK would crop up now and again in a documentary concerning the second World War. Burns seems to be deliberately going out of his way NOT to mention these figures. . .and when he does it almost seems like he's doing it grudgingly. While he is still covering the story. . .there are certain times you just HAVE to mention these figures or else you're leaving something out. This strikes me as one of those rabidly populist "social historian" type of thing and that approach to history really gets up my nose. 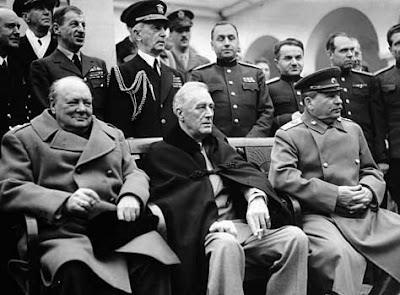 So yes, Ken Burns is generally capturing the flow of the second World War's story and there are some well-done moments in the series thus far. But yes, Mr. Burns, while the ordinary soldier's story is worth telling, so is that of the huge figures of history. A more balanced 50/50 documentary between common soldier and world figure would've made a MUCH more compelling documentary experience. At least for this viewer. And no, the old saw about "Well, we've HEARD all about those world leaders before" doesn't hold water. Because, if that's true, then why would we tune in to a documentary about World War II in the first place. If we've heard it all before, then there's no reason to watch Ken Burns' "The War" in the first place. And I still plan to watch it despite my reservations. Because hey, with the state of television as it is, it's STILL probably the only thing worth watching all week.
Posted by Cerpts at 5:24 PM

Oh come on the only thing on tv worth watching? Let's see Monday night there was the Heroes season finally which is almost as good as Lost. Tuesday is Beauty and the Geek and the season premier of House. Wednesday is Kid Nation (haven't made my mind up about that one yet, it might be rubbish) Thursday night still means Survivor. So now don't you feel silly.