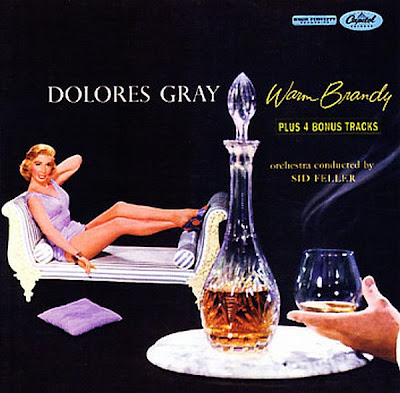 WARM BRANDY just arrived in the mail. Now I'm not talking alcohol naughtiness; I'm talking. . .well, auditory naughtiness, I suppose. "Warm Brandy" is a cd of Dolores Gray's only 1957 LP of sultry SULTRY standards. A nice description of it can be found if you click here -- you can also listen to a snippet of the songs as well. With such songs as "Shangri-La", "Don't Blame Me" and "You Go To My Head", "Warm Brandy" goes down just like the real thing -- smooth, smooth smooooooooooooooth with a nice smoldering sensation at the finish. Dolores Gray was in a lot of musical films in the 40's and 50's and will probably be familiar to those of you who frequent classic films. (Fink, you should have ALREADY stopped reading this.) Gray has an OK voice (nothing spectacular) but she's perfectly suited for these songs. We're talking a yearning, torch singer accompanied by a softly-strummed electric guitar on nearly every track!
This album reminds me a lot of June Christy's LP "Something Cool" from around the same time period (and if you don't own THAT album, shame on ya!). Only, where June Christy has a large dose of melancholy loneliness in her LP as she sadly nurses her drink at the end of a bar, Dolores Gray has the fireplace lit, the bear rug spread in front of it and the martinis chilled. As soon as this album is finished playing, SOMETHING'S gonna happen. And I don't mean championship darts. Va-va-va-VOOM! So, if you're in a real loungy, mellow mood you need to spin THIS platter.
Posted by Cerpts at 5:17 PM