BOO!  Sometimes I didn't think I'd make it.  But here we are at October 31st and I'd like to thank everyone for stopping by to share in the Halloween fun all month long.  Here we have a few more friends to tell us a little of their thoughts on Halloween! 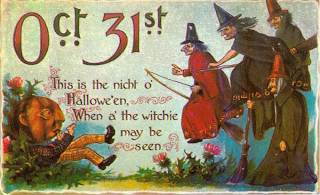 "Eye of newt, and toe of frog,
Wool of bat, and tongue of dog,
Adder's fork, and blind-worm's sting,
Lizard's leg, and owlet's wing,
For a charm of powerful trouble,
Like a hell-broth boil and bubble."
-- William Shakespeare, "Macbeth"
***
"What fearful shapes and shadows beset his path, amidst the dim and ghastly glare of a snowy night! With what wistful look did he eye every trembling ray of light streaming across the waste fields from some distant window! How often was he appalled by some shrub covered with snow, which, like a sheeted spectre, beset his very path! How often did he shrink with curdling awe at the sound of his own steps on the frosty crust beneath his feet; and dread to look over his shoulder, lest he should behold some uncouth being tramping close behind him! and how often was he thrown into complete dismay by some rushing blast, howling among the trees, in the idea that it was the Galloping Hessian on one of his nightly scourings!"
-- Washington Irving, "The Legend of Sleepy Hollow"


***
"A house is never still in darkness to those who listen intently; there is a whispering in distant chambers, an unearthly hand presses the snib of the window, the latch rises. Ghosts were created when the first man awoke in the night."
-- J.M. Barrie
***
"You wouldn't believe
On All Hallow Eve
What lots of fun we can make,
With apples to bob,
And nuts on the hob,
And a ring-and-thimble cake."
-- Carolyn Wells
***
"Bring forth the raisins and the nuts-
Tonight All-Hallows' Specter struts
Along the moonlit way."
-- John Kendrick Bangs
***
"On Halloween, witches come true;
Wild ghosts escape from dreams.
Each monster dances in the park..."
-- Nicholas Gordon
*** 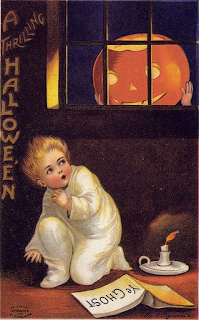 "On Halloween, the parents sent their kids out looking like me."
-- Rodney Dangerfield
***
"From ghoulies and ghosties and long leggety beasties and things that go bump in the night, Good Lord, deliver us!"
-- Scottish saying
***
"There are nights when the wolves are silent and only the moon howls."
-- George Carlin
***
"Halloween was confusing. All my life my parents said, "Never take candy from strangers." And then they dressed me up and said, "Go beg for it." I didn’t know what to do! I’d knock on people’s doors and go, "Trick or treat." "No thank you."
-- Rita Rudner
*** 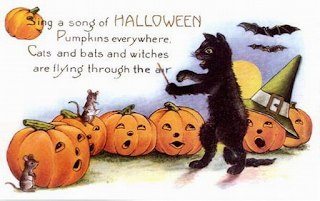 "I would rather sit on a pumpkin and have it all to myself than be crowded on a velvet cushion."
-- Henry David Thoreau
***
"Pixie, kobold, elf, and sprite,
All are on their rounds tonight;
In the wan moon's silver ray,
Thrives their helter-skelter play."
-- Joel Benton
***
"'Tis the night - the night
Of the grave's delight,
And the warlocks are at their play;
Ye think that without
The wild winds shout,
But no, it is they - it is they."
-- Arthur Cleveland Coxe
***
"Shadows of a thousand years rise again unseen,
Voices whisper in the trees, "Tonight is Halloween!"
-- Dexter Kozen
***
"Proof of our society's decline is that Halloween has become a broad daylight event for many."
-- Robert Kirby
***
"I don't know that there are real ghosts and goblins, but there are always more trick-or-treaters than neighborhood kids."
-- Robert Brault
*** 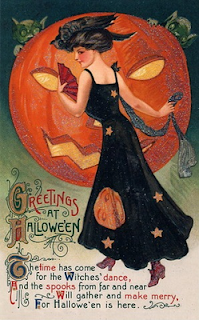 "Hark! Hark to the wind! 'Tis the night, they say,
When all souls come back from the far away-
The dead, forgotten this many a day!"
-- Virna Sheard
***
"The spirit-world around this world of sense
Floats like an atmosphere, and everywhere
Wafts through these earthly mists and vapours dense
A vital breath of more ethereal air."
-- Henry Wadsworth Longfellow, "Haunted Houses"
***
"I saw thousands of pumpkins last night
Come floating in on the tide,
Bumping up against the rocks and
Rolling up on the beaches;
It must be Halloween in the sea."
-- Richard Brautigan, "The Pill vs the Springhill Mine Disaster"
***
"Nothing beats a haunted moonlit night on All Hallows Eve... And on this fatal night, at this witching time, the starless sky laments black and unmoving. The somber hues of an ominous, dark forest are suddenly illuminated under the emerging face of the full moon."
-- Kim Elizabeth
***
""You kids have fun, and be home by Thanksgiving!" our parents would call to us on Halloween night, as we staggered out the front door, weighed down by hundreds of pounds of concealed vandalism supplies, including enough raw eggs to feed Somalia for decades. By morning, thanks to our efforts, the entire neighborhood would be covered with a layer of congealed shaving cream and toilet paper that, around certain unpopular neighbors' homes, was hundreds of feet thick. This is how the Appalachian Mountains were formed."
-- Dave Barry
*** 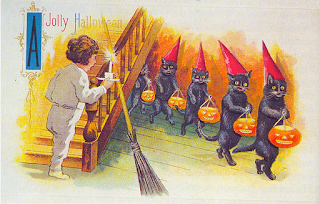 "They come to the door... they always ask you the same stupid questions: "What are you supposed to be?" "I'm supposed to be done by now.""
-- Jerry Seinfeld
***
"Those who believe in telekinetics, raise my hand."
-- Kurt Vonnegut
***
"Nothing on Earth so beautiful as the final haul on Halloween night."
-- Steve Almond
﻿
Posted by Cerpts at 9:55 AM