AS A RABID HORROR FAN, I HAVE QUITE A FEW BOOKS ON HORROR FILMS.  But as I suspect is true with most horror fans, I have several books which stand above all the others as particular favourites.  These are the horror film books which had the biggest formative impact on me probably by the not-inconsequential fact that they got to me early - during my childhood and adolescence when the horror genre seems to have the greatest impact on all of us.  This seems to be a common occurrence - beloved books which tower above all the others.  In the superb 3-part BBC documentary series A HISTORY OF HORROR (which can be watched below in its entirety), presenter Mark Gatiss lovingly describes Alan G. Frank's MOVIE TREASURY OF HORROR FILMS as the book that did it for him. 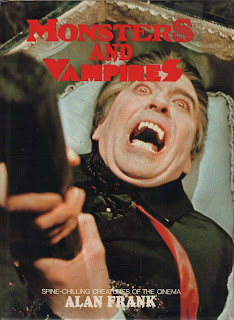 Well, there's an Alan Frank book amongst my most cherished early horror film books but its not that one; it's the later MONSTERS & VAMPIRES by Alan Frank.  It was in 1978-1979 when my grandfather bought it for me when we spotted it on a bargain table at Two Guys department store.  This was a big book -- tall, I mean -- filled with many pictures in colour on glossy paper  --  such as this beautiful full-page glossy still of Christopher Lee as Dracula. 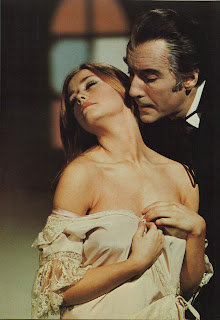 I had grown up reading FAMOUS MONSTERS OF FILMLAND magazine but that was all black and white stills on pulpy paper; this was something altogether more impressive to me.  And quite a few stills filled the entire page - and they were big pages, as I said.  Many of these films were British from Hammer and Amicus and Tigon and I had never been able to see them - so the rather detailed synopses of the entire Dracula film franchise and such was like a gold mine to me.  I've since gotten several other Alan Frank books including Mark Gatiss' ur-text but, as Mr. Gatiss himself demonstrates, there's nothing like the power of the first ones. 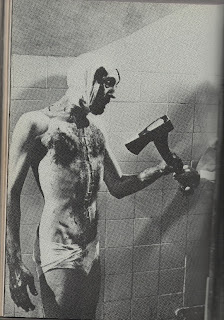 I remember a particular fright-inducer was this still from THE LIVING DEAD AT THE MANCHESTER MORGUE aka LET SLEEPING CORPSES LIE; with this zombie's entire front loosely stitched up, this still produced a shudder or two. 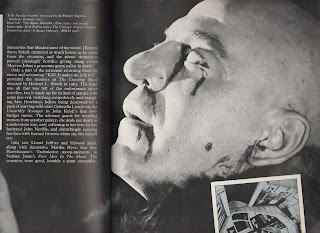 And then there's the fascinating still from HORROR EXPRESS showing Telly Savalas having his brain boiled; the bleeding stark white eyes was an attention getter and similar stills in FAMOUS MONSTERS magazine made me want to see this movie for YEARS before I finally managed to track down the film in a mid-80's K-Mart VHS bargain bin. 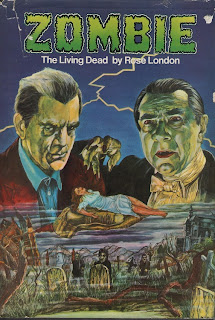 Alan Frank's MONSTERS & VAMPIRES wasn't, however, the first one for me because there was at least one before this:  Rose London's ZOMBIE:  THE LIVING DEAD is a book published in 1976 and that's the very year I picked it up at a bookstore on the boardwalk during a family vacation to the Jersey shore.  Now, this book is a hardcover too but a much smaller and thinner one and, with the exception of one brief section of colour photographs, all the stills are in black and white.  However, this book of mostly movie stills and posters with limited text was still an eye-opener and probably the very first horror film book I'd ever gotten.  The first eye-opening aspect of the book was undoubtedly the frequent stills featuring naked women; at 10 years old that REALLY felt like a grown-up film book.  The second eye-opener was the fact that the book mentioned scads of horror films I'd never even heard of; all sorts of exotic horror films never shown on Saturday afternoon TV like de Ossorio's BLIND DEAD films, Bava's BLACK SUNDAY and EL VAMPIRO starring German Robles were just a few. 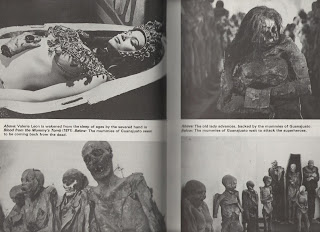 I still recall how photos of THE MUMMIES OF GUANAJUATO scared and fascinated me.  I don't know what it is about the quality of the pages in this book; is it the layout of the pages or the slightly murky black and white stills or is there simply the essence of horror saturated into the book's paper itself?  I don't know but flipping through the pages of this book brings me right back to that seashore motel room when I was a kid.  By the way, I also remember when I first brought the book back the the motel room and looked through it, there was a rerun of the NIGHT GALLERY episode "Midnight Never Ends" playing on the TV!  Perfect! 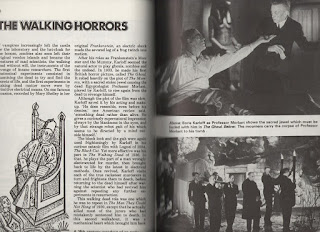 There were others to follow - other horror film books which I'd put on the same shelf as these two earliest ur-texts which helped shape my early entree into becoming a serious horror fan.  There was Denis Gifford's A PICTORIAL HISTORY OF HORROR MOVIES which again overflowed with numberless movie stills.  Les Daniel's absolutely superb LIVING IN FEAR studied the history of horror in all forms of media from literature and poetry to paintings, music, movies and television and frankly is an indispensible book for any fan of the horror genre and one of my favourite books full stop.  Another of my favourite examinations of horror is Stephen King's seminal DANSE MACABRE which is almost universally praised as an intensely personal journey through the horror genre by one of its most successful practitioners.  Or maybe my early early 80's acquisition of William K. Everson's slightly sniffy CLASSICS OF THE HORROR FILM which focuses on individual movies which added quite a lot of films to my "must see" list.  There are countless other wonderful and valuable books on horror films which I read later on but these are really the cornerstones of my horror film obsession in book form.  These are the books that sunk their fangs into my young brain and converted me forever into a horror film zombie.  And every few years I re-read them in order to experience that spooky, nostalgic chill that only happens when the horror bug bites you young.
Posted by Cerpts at 12:00 AM