HEY! THAT AIN'T ENGLISH! And neither are these bunch of films which are some of my favourite movies in a different language. Other than the one I speak, that is. And SOME would say I don't really speak English either but that would make the list MUCH too long. So here they are (Part One of Two). . . 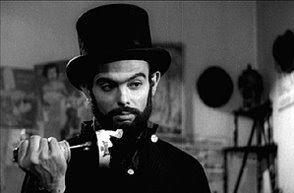 A Meia-Noite Levarei Sua Alma (1964) aka At Midnight I'll Take Your Soul
Country of origin: Brazil. This is the very first "Coffin Joe" movie starring (and directed by) Jose Mojica Marins as the blasphemous gravedigger searching the city for a woman to bear his demon child. Warped and twisted all the way; the film plays like a waking nightmare and there's simply nothing else in cinema like it. 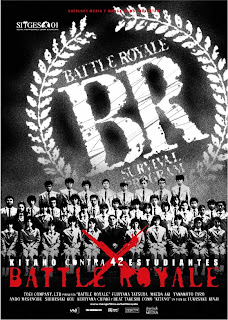 Batoru rowaiaru (2000) aka Battle Royale.
Country of origin: Japan. What to do about those unruly, disrespectful teenagers? Well, create a reality game show where a high school class kidnapped during a school trip, taken to an island and told to kill each other. The last one alive wins. Provide them with weapons, sit back and watch the fun. Gripping and emotionally harrowing in some parts; darkly funny in others. 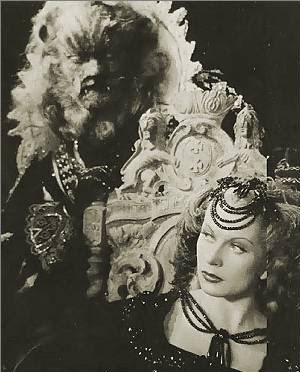 La Belle et la Bete (1946) aka Beauty and the Beast.
Country of origin: France. Jean Cocteau's dreamy retelling of the classic fairy tale. Don't give me this Disney nonsense; THIS is the only one to see. Hauntingly eerie and beautiful at the same time. 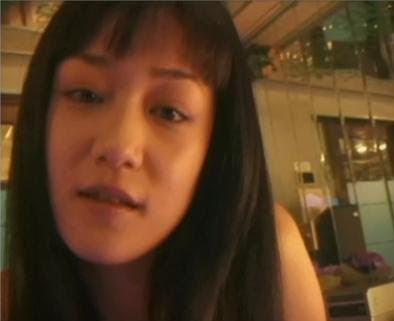 Bijita Q (2001) aka Visitor Q.
Country of origin: Japan. Cinematic terror Takashi Miike strikes again with the sickest, most warped and disturbed film ever made. Anywhere. Featuring the most disfunctional family ever portrayed. This movie cannot be described; only experienced. But brace yourself. You won't believe your eyes! 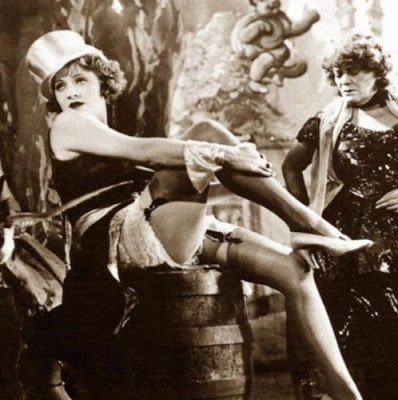 Der Blaue Engel (1930) aka The Blue Angel.
Country of origin: Germany. This is the one which shot Marlene Dietrich to superstardom. . .and she hadn't even ventured to Hollywood yet. Josef von Sternberg crafts a dark and pitiless film. 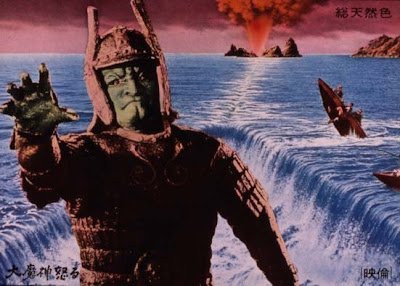 Daimajin (1966).
Country of origin: Japan. This is the first of three "Daimajin" movies. Here we have a giant blue-faced statue with a spike in his head that comes to life and stomps the living daylights out of a medieval (and Pure evil) warlord who is terrorizing a village. There's just something about that scowling blue face trampling over the countryside that warms my heart. 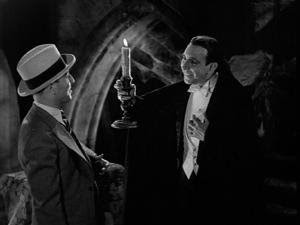 Dracula (1931).
Country of origin: USA. Universal shot this Spanish language version of Dracula on the same sets, using the same script but a different director and cast. In many scenes, George Melford's Spanish version is superior to Tod Browning's stagey English language version; however, it does NOT have the benefit of Bela Lugosi's performance. Since Bela learned all his English lines phonetically, I always wondered what the Spanish language version would have been like had Lugosi simply learned SPANISH phonetically and played the role in BOTH films. Now THAT would have been spectacular. The "superiority" of the Spanish version to the English one has been overstated for years; all things considered I think the Browning/Lugosi version has the slight edge. However, the Spanish version of Dracula has many MANY things to recommend it.
Geung si sin sang (1985) aka Mr. Vampire.
Country of origin: China. Here we have debatably the best example of the wild and wacky world of Chinese ghosts and hopping vampires. It's only rival is Spooky Encounters (down there a little ways). If you haven't experienced Chinese hopping vampires, nothing I can say here will prepare you for it. 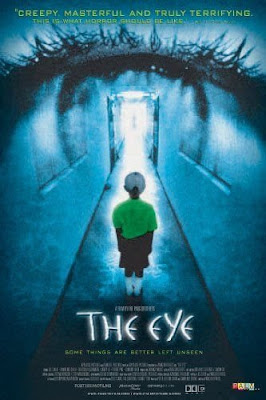 Gin Gwai (2002) aka The Eye.
Country of origin: Hong Kong/China. A blind girl gets a cornea transplant from an unknown donor; result being she can suddenly see ghosts. Sort of a Chinese version of The Sixth Sense but more than that. Another spectacular spookfest in the turn-of-the-21st-century Japanese horror boom.
Gui da Gui (1980) aka Spooky Encounters.
Country of origin: China. Another prime example of the delirious world of hopping vampires; this time aided by the slapstick presence of martial arts master Sammo Hung as the cowardly fool who somehow ends up having to do battle with the supernatural (while spying on his philandering wife).
Honogurai mizu no soko kara (2002) aka Dark Water.
Country of origin: Japan. Ever read "The Water Ghost of Harrowby Hall" when you were a kid? This is kind of the Japanese version. A mother and daughter move into a CREEPY apartment building and the patented Japanese ghost story (made famous by Ringu) gets underway. The eeriness of the film is also greatly helped by the performances (which ring SO true). 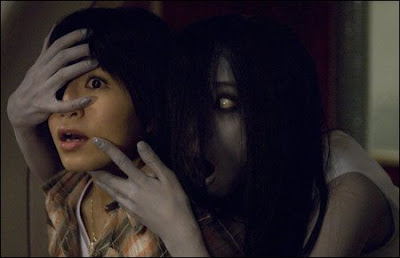 Ju-on (2000).
Country of origin: Japan. While there are many contenders, this is my choice as the BEST of the Japanese ghost/horror movies of the last decade; better than Ringu and it's many imitators. Whatever you do; avoid the American remake "The Grudge". Despite having the SAME director, the American version is severly blunted. Not only is Ju-on the best of these Japanese horrors but it's also one of the best ghost movies PERIOD. 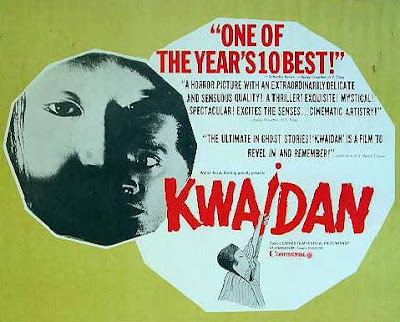 Kaidan (1964) aka Kwaidan.
Country of origin: Japan. This Oscar-nominated film features four ghost stories; all of them prime examples of ghostly folk tales. It's almost like an Amicus "Tales From the Crypt" transferred to Japan. These are tales told in front of a fire on a winter's night. My favourite of the four stories must be "Hoichi the Earless" which features a beautiful retelling of the famous Heike sea battle before the gripping tale of the blind Hoichi's encounter with the dead. The whole film, however, is stunningly beautiful to look at; it emulates Japanese paintings. 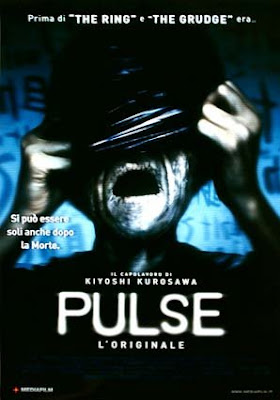 Kairo (2001) aka Pulse.
Country of origin: Japan. Another of the most effective Japanese ghost movies of the past decade, Kairo was slightly lost in the hype surrounding "Ringu" and "Ju-on" but it's right up there with them. Here we have an internet website which can contact the dead. The problem is. . .once you log on to the website, the ghosts become aware of YOU. Incredibly eerie and threatening. 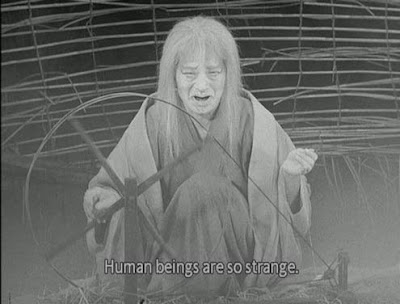 Kumonosu jo (1957) aka Throne of Blood.
Country of origin: Japan. Akira Kurosawa's masterful retelling of Shakespeare's "Macbeth" with the great Toshiro Mifune in the title role. Unbelieveable imagery from the very first frame of riders emerging from the incredibly dense, ghostly white fog. And later when those birds suddenly fly into the throne room. . .Wow! Probably the best filmic representation of what would happen if Burnam Wood were REALLY to come to Dunsinane.
Kung Fu (2004) aka Kung Fu Hustle.
Country of origin: China. The word that best describes this film is "RIOTOUS". Bruce Lee meets Looney Tunes by way of Quentin Tarantino. Hilariously inventive with spectacular special effects and martial arts stuntwork, this delirious movie has everything. 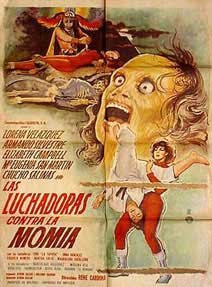 Las luchadoras contra la momia (1964) aka Wrestling Women vs. the Aztec Mummy.
Country of origin: Mexico. This is without doubt the GREATEST Mexican wrestler monster rally movie ever made. The only thing it doesn't have is Santo. Other than that, it's a nuthouse joy from start to finish. There's also no describing this film if you're unfamiliar with the Mexican wrestler monster movies of the 60's and 70's. This is a world where superheroic wrestling women saving the world from evil monsters suddenly take time out to fight a wrestling match. It all makes PERFECT sense, doesn't it?
Well, this is the FIRST half of my list of foreign language film faves. Stay tuned for the conclusion.
Posted by Cerpts at 5:05 PM