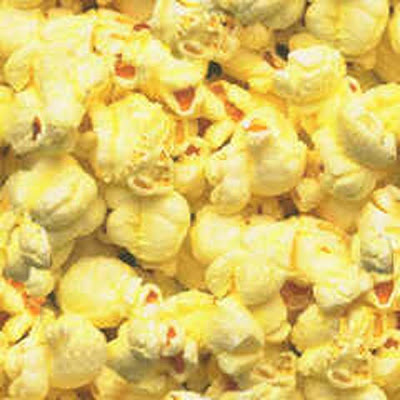 THE SECOND ANNUAL "CERPTS AND HONEY POPCORN MOVIE QUIZ"! Yes indeed. It happened last May and it's happening again. Here are 30 quotes from movies old and new. It's your job to tell me what movie it's from (and, for extra credit, the actor who said it) in the comment section. On your marks. Get set. Party.
1) "You stay classy, San Diego."
2) "I think sex is like supermarkets, you know, overrated. Just a lot of pushing and shoving and you still come out with very little in the end."
3) "Will no one rid me of this meddlesome priest?!?"
4) "Oh, we're going to talk about ME again, are we? Goody."
5) "These pipes go down about thirty feet. If we anchor to them we might have a chance!"
6) "I was jinxed from the word go. The first time I was ever kissed was in a cemetery."
7) "We will not go quietly into the night! We will not vanish without a fight!"
8) "Hey! Try not to suck any dick on the way through the parking lot!"
9) "You're just not COUTH!!!"
10) "She doesn't quite chop his head off. She makes a Pez dispenser out of him."
11) "You pink-ass, corrupt honky judge! Take your little wet noodle outta here and if you see a MAN anywhere send him in because I do need a MAN!"
12) "A) You can NEVER go too far. And B) If I'm gonna get busted, it is NOT gonna be by a guy like THAT!"
13) "Why do you wear that stupid bunny suit?"
14) "Business bad? Fuck you, pay me! Oh, you had a fire? Fuck you, pay me! Place got hit by lighting? Fuck you, pay me!"
15) "I'd like to apologize . . . but who to?"
16) "To 1966. The year one!"
17) "I think I'll have a large order of prognosis negative!"
18) "You tell him and I will smack you! I will smack you like a bad bad donkey, okay?!?"
19) "I'll tell you right out, I am a man who likes talking to a man who likes to talk."
20) "I've got to do something about the way I look. I mean, a girl just CAN'T go to Sing Sing with a green face!"
21) "Kickboxing. Sport of the future."
22) "Oh for God's sake! He's got an arm off!"
23) "Y'all ain't NEVER got too things that match! Either y'all got Kool-Aid, no sugar. Peanut butter, no jelly. Ham, no burger. Damn!"
24) "Diabetes! I ought to know better than to hire anybody with a DISEASE!!!"
25) "Jack! Nothing tricky now. You KNOW I'm on top of you. DO NOT attempt to grow a brain!"
26) "Where John made his mistake, I think, was in attaching so much importance to what her mother and I might think; because in the final analysis it doesn't matter a damn what we think. The only thing that matters is what they feel, and how much they feel for each other. And if it's half of what we felt? That's everything."
27) "Can you help a fellow American down on his luck?"
28) "The spider spinning his web for the unwary fly."
29) "Did he tell you exactly what to do? What to say? You were a very apt pupil too, weren't you? You were a very apt pupil!"
30) "You have been a participant in the biggest interdimensional cross rip since the Tunguska blast of 1909."
DISCLAIMER: I would JUST like everyone reading to know that I am WELL AWARE the Tunguska event DID NOT take place in 1909 -- that is an error on the screenwriter's part and I'm just delivering it up to you.
I will post the answers a little later once all my readers sober up some.
Posted by Cerpts at 4:24 PM

1: Anchorman (I can't believe I saw that movie).
2: Shirley Valentine
3: Didn't King Henry say that? A movie about Thomas Becket --- I think it was called "Becket".
4:Well that's Kate in Philadelphia Story (just watched it the other night).
5: Oh come on, it's a quote from the greatest film of all time, TWISTER!!!
6: Don't know this one
7: Oh god, Independence Day!
8: Clerks
9: Judy Holiday to Broderick Crawford in Born Yesterday!!
10:Sin City
11: That was Pam Grier, but I am not sure what movie...Coffey? Foxy Brown?
12: Ferris B's Day Off!
13: Donnie Darko to Frank the Bunny
....
OK, I'll let someone else finish up.

Ok, just posting the ones I'm pretty sure of:

How could I resist a movie quiz with a Clive line?

1. Anchorman - Will Ferrel
2. Shirley Valentine - I don't know what her name is.
3. I know King Henry II said it but I don't know what movie or actor.
4. Philadelphia story - Kate
5. Twister - Bill Paxton (but an even better quote by Helen Hunt is "Guys, we are NOT invading my aunt!"
6. The Apartment - Shirley MacLaine
7. ID - Bill Pullman
8. Clerks - Brian O'Halloran
9. Born Yesterday - Judy Holliday (that was a tough one)
10. Sin City - Clive Owen
11. Foxy Brown - Pam Grier
12. Ferris Bueller's Day Off - Matthew Broderick
13. Donnie Darko - Jake Gyllenhaal
14. Goodfellas - Ray Liotta
15. In Cold Blood - Robert Blake (another tough one)
16. Rosemary's Baby - Sidney Blackmer
17. Dark Victory - Bette Davis (this one is much harder this year, dude)
18. Muppets From Space - Pepe the SHRIMP (or did you want the voice actor Bill Barretta? Ha!)
19. The Maltese Falcon - Sydney Greenstreet
20. Breakfast at Tiffany's - Audrey Hepburn
21. Say Anyting - John Cusack
22. Shaun of the Dead - Simon Pegg
23. (AAAAhahahahahah) Friday - Chris Tucker (puff puff give you fuckin' up the rotation)
24. His Girl Friday - Cary Grant
25. Speed - Dennis Hopper
26. Guess Who's Coming to Dinner - Spencr Tracy
27. The Treasure of the Sierra Madre - Humphrey Bogart
28. Dracula - Bela
29. Vertigo - Jimmy Stewart
30. Ghostbusters - Dan Aykroyd (and it was not an error by the screenwriters it was supposed to be off by one ear to show how close the character was to being right but was always just off by just that much)
there I'm done now I need a nap.

Sorry Cheekies, Every single one of your answers was wrong.