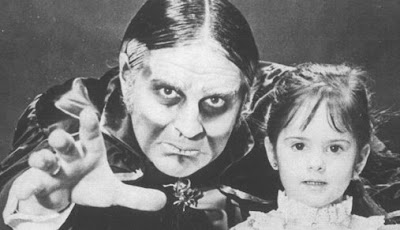 SHOCKY DOC'S MAD HORROR THEATER: DAY ONE! Each day's movie picks are going to be in honour of my late, lamented childhood horror host from Philly's Channel 17: Dr. Shock! Joe Zawislak portrayed Dr. Shock for almost the entire decade of the 70's before his untimely death in 1979. His Saturday afternoon double feature programs of Mad Theater and Horror Theater kept me in monsters all throughout my childhood. It has also been my privilege in recent years to have met his daughter Doreen or "Bubbles" who grew up on the program. So, I could think of no better figurehead for my daily horror movie picks than the immortal Doctor Shock! So I'd like to dedicate this month-long monster movie feature to "Bubbles" and her much-loved (and missed) father Joe. To the memory of Dr. Shock (and with all my affection): "LET THERE BE FRIGHT!"
In order to get things rolling like a pumpkin down a graveyard slope, I thought my first Halloween spooky movie recommendations should be a TRIPLE FEATURE to get things started! 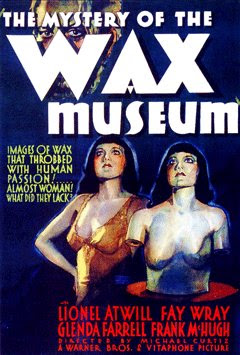 1st movie: MYSTERY OF THE WAX MUSEUM. A perfect way to start the month of October -- with this odd, spooky looking two-strip technicolor horror film from 1933. Yes folks, it's actually in colour! Only not FULL color -- which makes it look really creepy. This is also the film which started all the horror movie "wax museum" cliches. It's got the marvelous Fay Wray (who doesn't scream QUITE so much as she did in KING KONG) and the devilish Lionel Atwill as demented sculptor Igor who is scarred in a fire which destroys his first wax museum. If all this sounds familiar, it's because they remade it in the 50's (in 3-D) with Vincent Price and called it HOUSE OF WAX. While the Price picture is good, I've always liked this original version MUCH better! Even the wise-cracking, gum-chewing reporter played by Glenda Farrell is kinda endearing to me and doesn't get on my nerves. The classic scene is the unmasking -- supposedly wheelchair-bound Lionel Atwill suddenly stands up and looms over frightened Fay Wray. 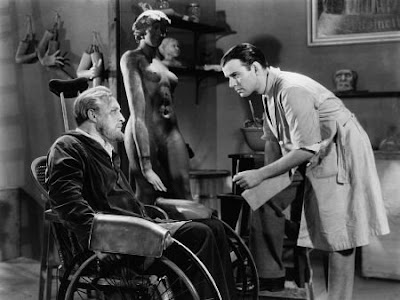 In a desperate attempt to break loose from the menacing sculptor, Fay batters his face -- which cracks and falls away revealing a hideously scarred/melted face beneath. Time for Fay's patented scream!

A wonderful moment which surprised even Fay Wray -- who never saw the monster makeup before the cameras rolled. A truly creepy film. 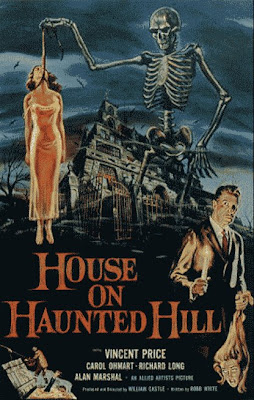 2nd movie: HOUSE ON HAUNTED HILL. This is the 1959 spookhouse thrill ride conjured up by ballyhoo master William Castle starring Vincent Price as the eccentric millionaire who throws a party for his wife (steely Carol Ohmart who would appear several years later in the cult film "SPIDER BABY" playing much the same character) and 5 strangers. 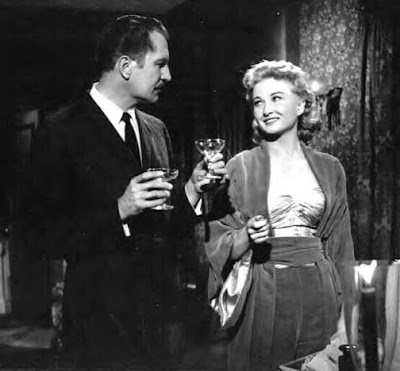 If they can all stay in a haunted house all night long, he will give them each $10,000. Of course, previous houseguests have all met grisly demises: thrown into a vat of acid, beheaded, etc. In fact, there are a couple severed heads that were never found and are still somewhere in the house. This is also the film featuring "Emergo": which consisted of a paper skeleton being wheeled out over the theater audience at the proper scary moment. Unfortunately, kids quickly discovered the skeleton was only paper and promptly bombarded it with popcorn boxes and candy until the poor skeleton was shredded! What a great movie for Halloween! 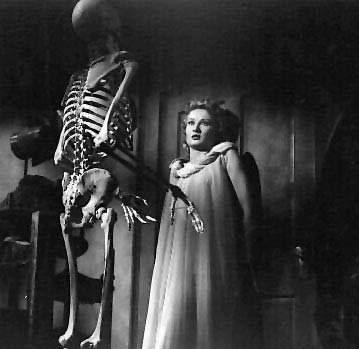 Of course, NONE of the ghostly goings-on make ANY sense WHATSOEVER -- and that's part of the fun! Elisha Cook Jr. as the squirrely Watson Pritchard (previous shellshocked survivor of the house) is marvelous. And yes, I do in fact quite like the 1999 remake starring Geoffrey Rush and Famke Janssen -- it's just as much spooky fun as the original . . . and actually features REAL ghosts! 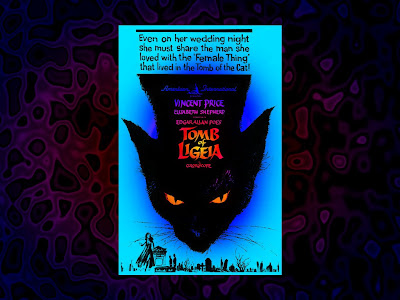 3rd movie: THE TOMB OF LIGEIA. This is the final Edgar Allan Poe film made by Roger Corman and Vincent Price . . . and SOME consider it the best. While I wouldn't go THAT far (HOUSE OF USHER is the best), it's very good. The opening scene is gold! Corman filmed in England at a marvelous real ruined abbey. We see a funeral procession; Vincent's dead wife Ligeia is being buried. Of course, Ligeia was a willful lady and the local minister tries to stop her from being buried in hallowed ground. Ligeia's motto (carved into her very tombstone) is that man need not suffer death but for the weakness of his feeble will. From the little we know about Ligeia, we're pretty sure she can conquer death. Vincent is wonderful as Verden Fell: a sort of negative image of Roderick Usher: Vincent has black hair in this film but sported bleached white hair in the first Usher film. . .and both characters suffer acuteness of the senses. In this film, Vincent wears funky black glasses to shield his eyes from the sun.

Combine this with a black cat which SEEMS to be possessed by the dead spirit of Ligeia and you've got a nice little horror to watch in October.
Posted by Cerpts at 6:07 PM

Hmmm only two days in and I'm already behind. I've only seen ne of the three you mention. House on Haunted Hill. Liked both versions, liked the remake better than the original. I did see the wax museaum movie with Paris Hilton in it does that count? But you hit on Dr. Shock, and I also grew up watching him on Creature Double Feature every week. He is still missed.

No you didn't. Creature Double Feature was on Channel 48 at the same time as Dr. Shock's Mad Theater and Horror Theater on Channel 17. Each Saturday afternoon was a channel-switching decision-making time as you found out which 2 movies were playing on each show. Creature Double Feature was great because they'd tell you in the first minute what they were gonna play. . .so then you could switch to Dr. Shock and watch his antics before he announced which movie he would show. At least that's what I always did.