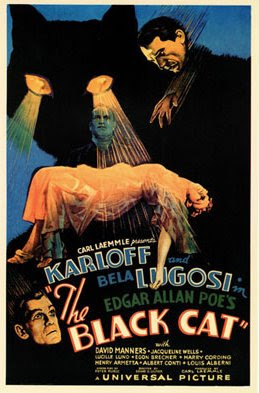 "SUPERNATURAL, PERHAPS. BALONEY, PERHAPS NOT." Thus spaketh Bela in the first screen team-up of the two top screen titans Karloff and Lugosi in 1934's "THE BLACK CAT". Expertly directed by Edgar Ulmer, this is almost a masterpiece. It only runs into trouble in the final reel when things start moving much faster (and kinda dumber). Take for example poor put-upon male ingenue David Manners (fresh from his appearances in "DRACULA" and "THE MUMMY" a couple years before. He's been konked and thrown into a sliding room as Boris' prisoner. The room slides around the house so that the only door is now behind a wall. No escape! Of course, David Manners wakes up, strikes a match and sees the wheel which slides the room around INSIDE THE ROOM WITH HIM!!!!! Ah, but besides the relative silliness of the end of the film, everything leading up to that point is superbly creepy . . . and downright SICK! 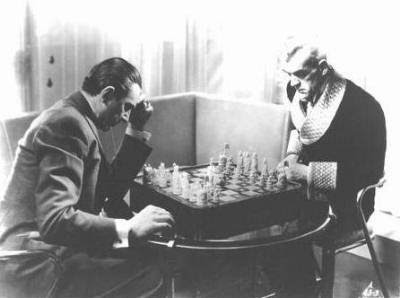 Lugosi plays Dr. Vitus Verdegast, a survivor of 15 years in a prison camp. Karloff as demonic architect Hjalmar Poelzig was in command of the fort where Lugosi served and betrayed them all to the enemy; resulting in Fort Marmaros becoming a huge graveyard. Karloff, being the well-adjusted fiend that he is, designs and builds a fantastic Bauhaus-like house RIGHT ON TOP OF THE FORT'S RUINS AND GRAVES. The movie starts with Lugosi training his way to meet Karloff; on this train he meets said David Manners and his new bride Jacqueline Wells (a sometimes inadequate actress for the role). This trio (joined by Lugosi's hulking manservant) end up in a bus accident right in front of Karloff's mansion. The magnificent set by Charles D. Hall is crisp and clean (yet bizarre and threatening) and is the perfect domicile for Karloff's Poelzig. And his underground tunnels containing ALL his dead wives (preserved hanging upright in glass cases . . . I told ya this was a sick film) provides the wonderful roaming camera of Ulmer and cinematographer John J. Mescall. And Karloff's look is fantastic in this film: the dark, wolfish eyes and extremely devilish hair with pointed widow's peak. 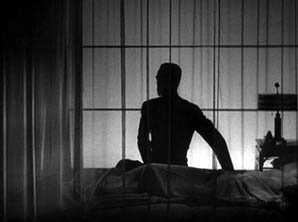 Boris is still VERY thin in this film and the black costumes (allegedly by Ulmer himself) play up his cadaverous physique. Ulmer first introduces Karloff as he is awakened by the arrival of our "heroes"; he rises up in bed (in silhouette) and we see his emaciated shadow cross the room. I don't know what it is about this scene that wordlessly conveys Karloff's threat before we even really SEE him. 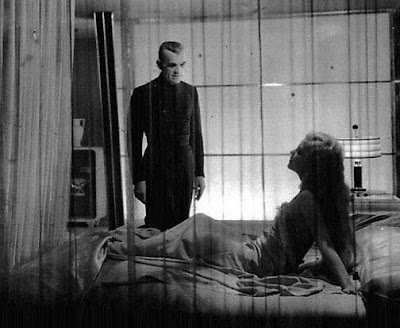 The initial meeting between Lugosi and Karloff is priceless (naturally, since Vincent Price ain't in this film! Sorry.). They eye each other like two predators and Lugosi talks and talks while Karloff remains silent. Lugosi talks some more. Still Karloff remains silent. . .Boris has not as yet spoken in the entire film. Finally, after longer than you'd THINK a director would have one of his stars mute, Karloff gives a gentle leer and says: "Vitus. . .you ARE mad!" Both terror titans deliver their lines with subtle venom and it's a joy to listen to them; particularly Boris. On top of all his other fun hobbies, Boris is also the leader of a Satanic cult planning to sacrifice Jacqueline Wells (all in all not a bad idea). Try as I might, I STILL can't spot a young John Carradine amongst the crowd.
Of course, there IS a black cat. It's kinda just thrown into scenes here and there as a concession to the film's title. This is certainly no film adaptation of Poe's story; there are OTHER films which do that. Instead, this is a totally original story which hangs it's mood on the spirit of Poe. Lugosi's character is revealed to have an irrational fear of cats. And that's that. While Lugosi "appears" to be a good guy, he's not really wrapped any tighter than Karloff. Verdegast, after all, has come to take revenge on Poelzig and, given the chance, Lugosi chains up Karloff in order to skin him alive. Of course, we the audience pretty much go along with Lugosi since it's been revealed that not only has Karloff married and (probably) killed Bela's wife but he THEN married Lugosi's daughter -- and has just killed HER too! 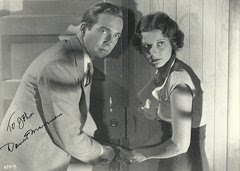 Manners and Wells DO eventually escape the house of hell just before it blows up (another convenient explosive red button/lever that seem to exist for no other reason than to end horror movies -- see BRIDE OF FRANKENSTEIN a year later). Of course, we don't REALLY care whether the young couple escapes or not. HOWEVER. . .let me just say that, in some scenes, Manners actually holds his own against Lugosi and Karloff. And that's no small feat! As Manners observes the stalking and parrying between the two horror greats, he shows a total awareness and appreciation for what's going on between the antagonists -- and Manners does it completely in character. So, while David Manners was never given much to do in horror films, he is always a welcome presence and NOT one of those bland, inconsequential "leading men" seen in a lot of other monster movies. He does his best and it's pretty good. 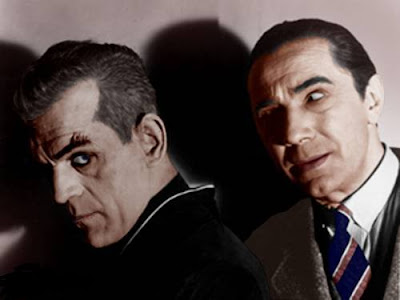 So, along with "DETOUR", this is surely Ulmer's best film. Two horror greats locking horns on equal footing (something which wouldn't really happen in any other screen teaming of Karloff and Lugosi). This movie is surely what Halloween is all about.
Posted by Cerpts at 10:31 AM