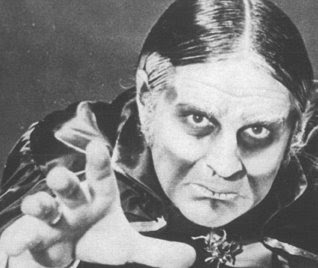 SHOCKY DOC'S MOVIE: DAY TWO. Here are my movie choices for witches and goblins everywhere. Today I chose a double feature to really get us in the Halloween mood. And what better way to get in the Halloween spirit than to watch...
Movie #1: THE BLOB. 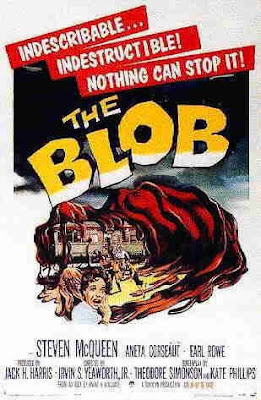 Sorta Rebel Without A Cause Meets The Thing From Another World. Or something. It's 1958 and all the teenagers are around 30 years old. At least in this picture. The movie trailer for the Blob famously trumpeted "The Blob starring Steve McQueen and a cast of EXCITING young people". This probably stems from the fact that Steve-O is the only "name" in the movie. But that's OK. THE BLOB doesn't need a name cast -- it's got Blobby! And he's enough to carry ANY picture. 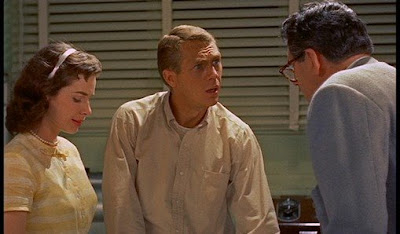 "Teenager" Steve McQueen (whose character is named, what else, Steve) and girlfriend Jane . . . not Janey. . .just Jane (played by Aneta Corsaut) are "parking" and in the midst of a major smooch when they see a shooting star. Now, this involves some MAJOR acting talent because, from all reports, McQueen and Corsaut hated each other! But anywho, the meteor that falls to earth is poked at with a stick by a dotty old man. The "meteor" cracks open and the oogey interior leaps onto the old man's hand and slowly begins to not only creep up his arm but to absorb him. Old man runs willy-nilly in front of Steve's car, Steve and Jane take him to Doc Hallen, Doc Hallen and nurse are promptly eaten up by the now MUCH LARGER Blob, misunderstood teenagers (read: hoodlums) try but fail to convince the authorities there's a monster loose (while also managing to cram in a backwards drag race and a trip to the midnight spook show). 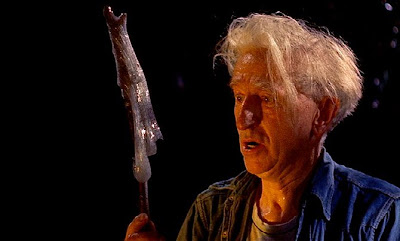 THE BLOB is one of the most typical 50's horror flicks which is a lot of fun to watch (and munch popcorn -- or candy corn -- to). The Blob itself is still wonderfully effective today and is probably one of the most beloved 50's monsters of all time! How can you not love that big ole glop?!?!? And what's even better. . .he has his own bouncy theme song written by Burt Bacharach! How can you go wrong?!? It's also really nice to know that the Downingtown diner (where the Blob corners Steve and his companions) is still standing in Pennsylvania. I'd love to go have breakfast there one of these days; I think I'll order eggs blobby side up!
Movie #2: DEAD OF NIGHT. 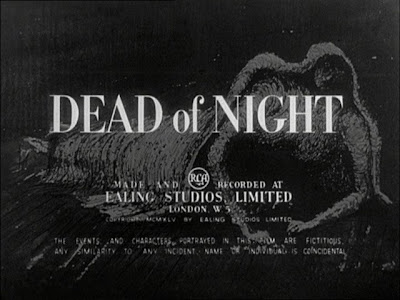 This classic British horror film of 1945 is essentially the first "omnibus" horror movie of the sound era. . . and it's a chiller! "Omnibus" horror films are movies that have several different short stories with a wraparound story to hold them together. This is one of the best. The wraparound premise finds Mervyn Johns going to visit some people in a country house. He has a strong sense of deja vu that he has lived through this all before -- in a recurring nightmare. He's never been to the house before but knows where everything is and recognizes all the people there. When he tells the others this, each one relates their own strange story of premonitions and supernatural occurrences. 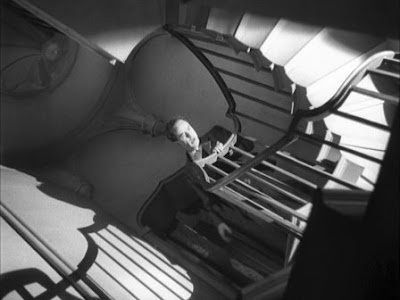 The first story involves a hospitalized race car driver who has a vision of a hearse driver opening the door for him with the phrase "Room for one more inside, sir!" The racer is suitably freaked out. Later, when discharged from the hospital, he's about to board a bus when the same man opens the door to the bus and says, "Room for one more inside, sir." Naturally, the fella declines to enter and the bus pulls away and crashes down an embankment. Now, this rather simplistic summary of the episode provides absolutely NONE of the mood and suspense of the actual film sequence. All of the film sequences (each directed by a different director) are taught, creepy and VERY effective. The film itself is charged with a strange sort of potent energy rare in such an old film. Even after repeated viewings, when you know what's going to happen, the film is still chillingly effective due to the top notch directing.
Very briefly, the second story concerns a teenage girl who goes to a children's Christmas party at a huge old mansion and encounters the ghost of a murdered child while playing sardines (a kind of hide-n-seek). Another story is a whimsical ghost story involving two golfers who play for the right to marry the woman they both love. The loser walks into a pond and drowns himself only to come back and haunt the winner for cheating at the golf game. 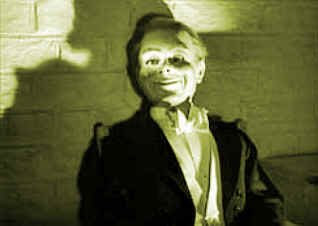 Probably the most famous sequence involved Michael Redgrave as an unhinged ventriloquist who is tormented by his dummy -- who has a life of his own. This is a truly chilling segment; directing-wise and acting-wise as Redgrave's performance is pretty stunning. This is the source of ALL those other movies and TV shows about scary ventriloquist dummies including the famous Twilight Zone episode with Cliff Robertson; which is basically a retelling of this story. 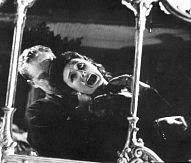 However, my favourite sequence is the "haunted mirror" story. A woman buys her fiance an old mirror. Shortly after receiving it, the man starts seeing a completely different room in the mirror behind him. He slowly becomes unhinged as the "spirit" haunting the mirror begins to take him over. Of course, the mirror was witness to foul and bloody deeds and possesses any who own it. This, for my bucks, is the scariest sequence of the film. Notably, a very similar story appears much later in the 70's Amicus "omnibus" horror film "From Beyond the Grave" in which David Warner buys an antique mirror which causes him to go out and kill. This is perhaps the best of all Amicus horror films and this segment has a lot to do with that assessment. But back to DEAD OF NIGHT which, after watching it yet AGAIN today, I still find to be one of the greatest horror films of the 40's -- and one of the top Halloween movies to pop in the DVD player for chills and thrills. 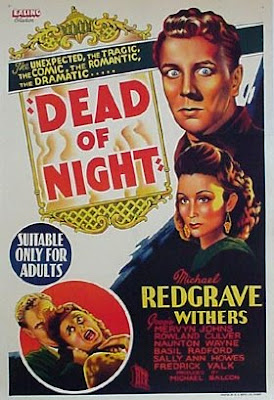