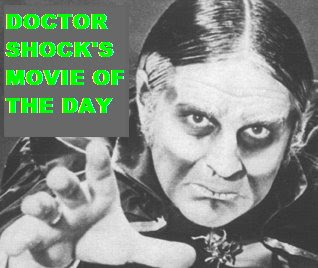 DAY FOUR! While strolling around Officeland (thanks, Daddy Pax) today I looked around and thought it would be appropriate to choose for today's Halloweenie movie "I WALKED WITH A ZOMBIE". I don't know WHY that thought came to me.
This is the product of producer Val Lewton's tenure with RKO Studios and is another of the incredibly stylish, understated horror films Lewton turned out lumbered with a sensationalistic title imposed by the head office. The folks at RKO, hoping to force Lewton into producing a slam-bang horror picture to make them money, gave him a title and said "Make a movie around it". Of course, wiley Val Lewton managed to turn out sophisticated adult horror films DESPITE the often silly titles he was saddled with. Teamed with the deft touch of director Jacques Tourneur, Lewton made "I Walked With A Zombie" into one of the best. 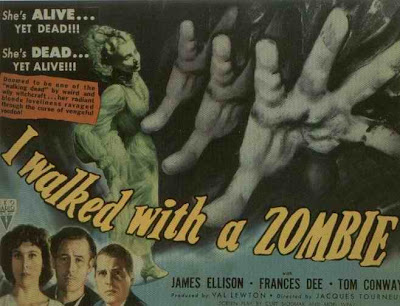 The story is actually usually described as "Jane Eyre in the West Indies" and that's fairly accurate. Nurse Frances Dee is hired by sugar plantation owner Tom Conway to take care of his sick wife. When Dee reaches Conway's island San Sebastian, she discovers that Conway's wife appears to have been zombified; she is considered by the locals as one of the living dead. Of course, she and Conway's alcoholic brother James Ellison appear to have had a little fling. This affair is common knowledge among the populace since they've even written a little song about it which calypso singer Sir Lancelot (yes, that's the actor's real name -- and he's a veteran of other Lewton films such as "Curse of the Cat People") pointedly sings at Frances Dee every chance he gets. Sir Lancelot is actually very good in this scene; whereas his previous portrayals were submissive, this time he sings this song with an agressive venom that is subtly threatening. It's also a nice touch that the music to the song is "Ah Woe, Ah Me"; a calypso song a certain Cheeky-Weekies should be very familiar with. 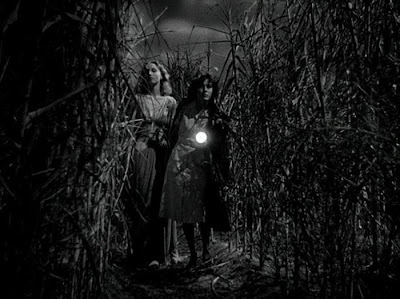 A local servant Alma (Teresa Harris) aids nurse Dee in taking the zombified wife to the local voodoo home fort to ask the god Dambhala for a cure. There they meet the mother of the two feuding brothers Mrs. Rand (nicely played by Vincent Price's first wife Edith Barrett) who combines voodoo ritual with Western medicine to aid the local population. This little journey provides the most celebrated sequence in the film: the long, eerie walk through the swishing sugar cane fields where the nurse and the zombie wife encounter the startling form of a staring zombie guardian called Carrefour (played by the stunning Darby Jones). This "long walk" is filmed expertly with no dialogue and incredible photography. It's justly famous. 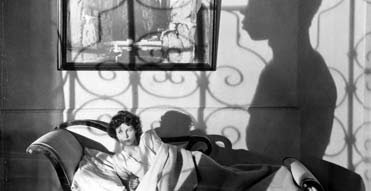 "I Walked With A Zombie" has a nice, eerie (there's that word again) atmosphere right the way through it; J. Roy Hunt's cinematography is responsible for a great deal of that. There is magnificent usage of cast shadows all throughout the film; including during the day. The acting is uniformly superb by the entire cast; the supporting players (like Teresa Harris, Sir Lancelot and Darby Jones) perform as expertly as the leads and have equal weight in the film. Another particularly wonderful moment is when Alma convinces the nurse to try voodoo to cure the zombie woman; as she speaks of the power of the voodoo gods Teresa Harris's eye practically blaze with fire as she tells Frances Dee there are "better doctors" than the Western kind. 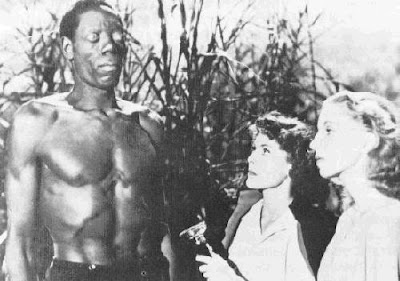 While those with short attention spans may squirm at the lack of slam-bang action, those with more adult tastes will find "I Walked With A Zombie" a wonderfully ethereal and expertly-made horror film that might haunt them for days (and nights. . .gulp!) to come.

His name was Sir Lancelot?!?!? Bwaaaaa hahahahahahah! That can't be true.