WHEN I'VE DONE THE COUNTDOWN TO HALLOWEEN IN THE PAST, I USUALLY DID THE TIME HONOURED THING OF WATCHING A HORROR FILM A DAY AND POSTING ABOUT IT. 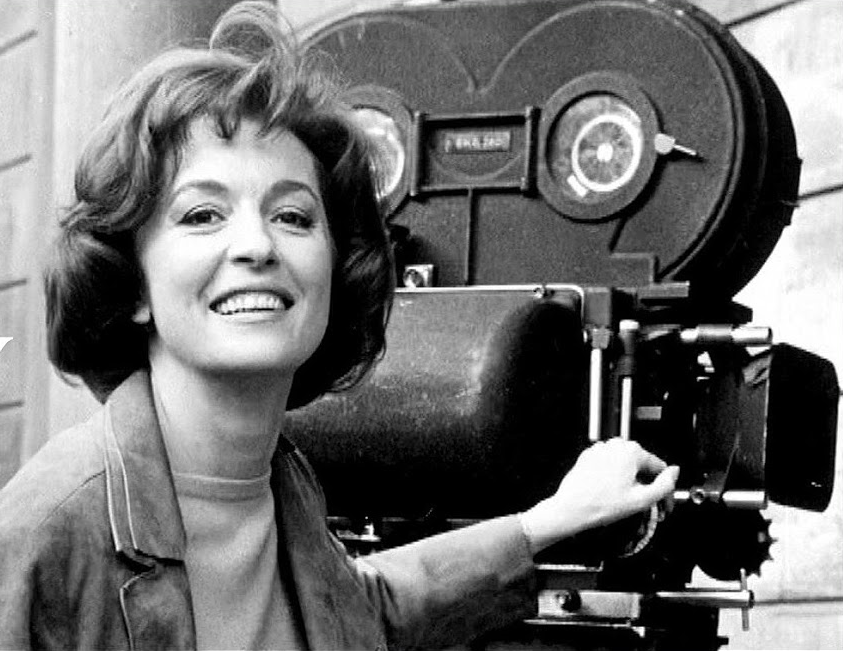 Last year in the Countdown, I changed things up a little by watching a horror-themed TV programme a day.  Well, this year I didn't think I'd be able to swing a movie a day (to my utter disappointment) but would instead just post about anything Halloweeny I am able to watch during October. 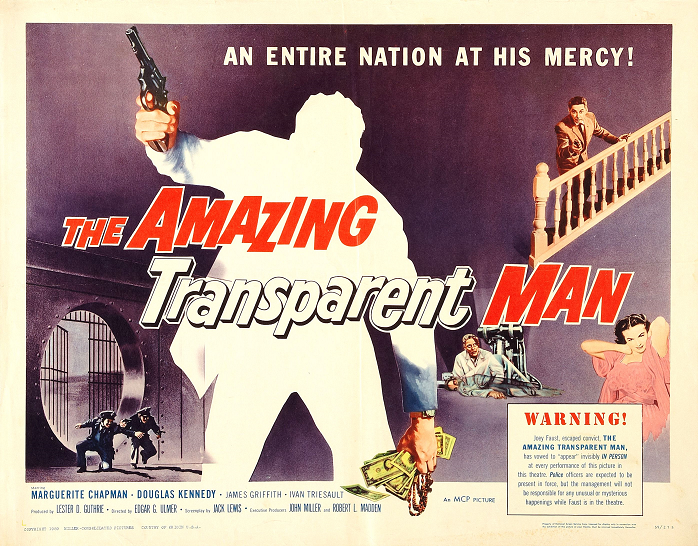 I did manage to start off October with a bang (or is that more like a wet squibb???) by watching three horror films which, shall we say, weren't no CITIZEN KANE.  I was watching all three films for the first time ever and I must admit I didn't have high expectations going in.  The first film of my Halloween triple feature was the 1960 yawn-fest THE AMAZING TRANSPARENT MAN.  The film was directed by Edgar G. Ulmer (who brought us THE BLACK CAT and DETOUR among many others) and it's surprising just how lackluster an affair it all is.  Granted, there's not much of a script there to do anything with. 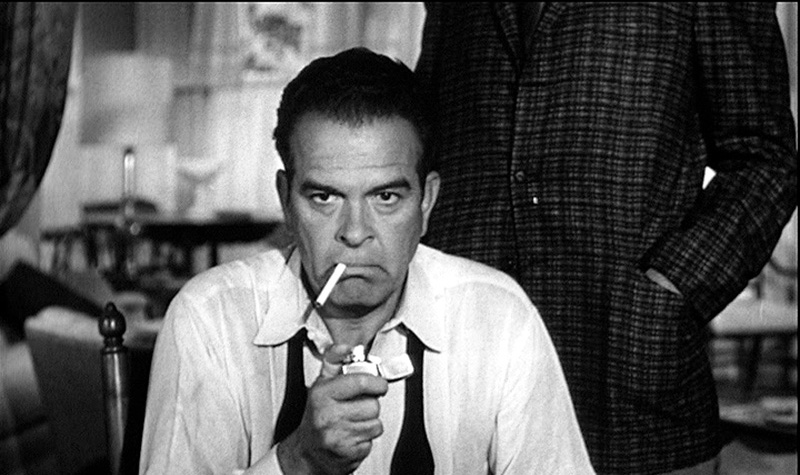 A surly safe-cracking convict is busted out of prison by a "big thinker" who also has a mad scientist on hand to develop an invisibility ray; he plans to use the safe-cracker to steal nuclear materials for something or other while he's invisible.  "Invisible Man" movies are not the most exciting things in the world and they're usually quite predictable; the only true classic is the original Universal Claude Rains flick "THE INVISIBLE MAN".  So there's one strike against the film from the start.  Add to it the criminal/gangster element, which I've always found to be horribly tiresome in a horror film (BLACK FRIDAY anyone?!?!) and that's strike two.  I think the film is only 57 minutes long but it seems twice that length.  Watch the trailer for the movie and you don't need to sit through the whole film. 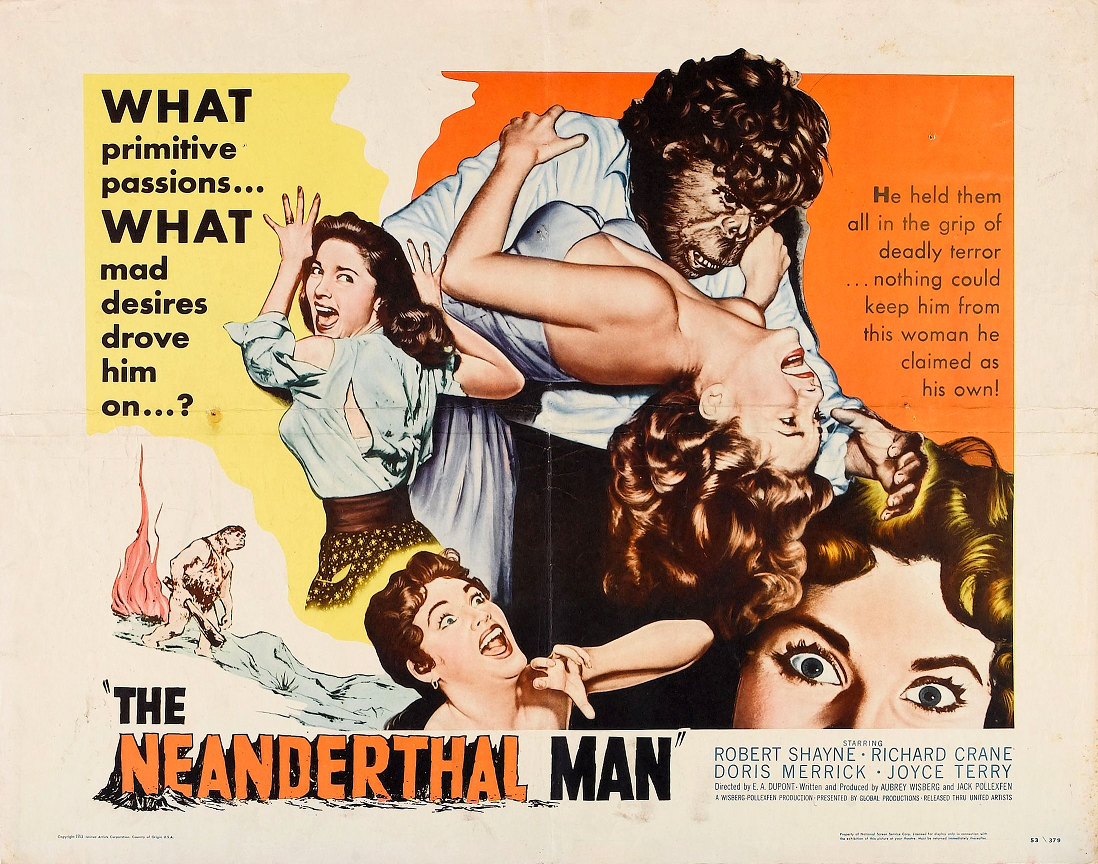 The second film of the day was THE NEANDERTHAL MAN from 1953.    Waves of apprehension settled over me!  Whereas THE AMAZING TRANSPARENT MAN had no stars in it, at least THE NEANDERTHAL MAN had Robert (THE ADVENTURES OF SUPERMAN) Shayne as well as a small part by the up-and-coming Beverly Garland. 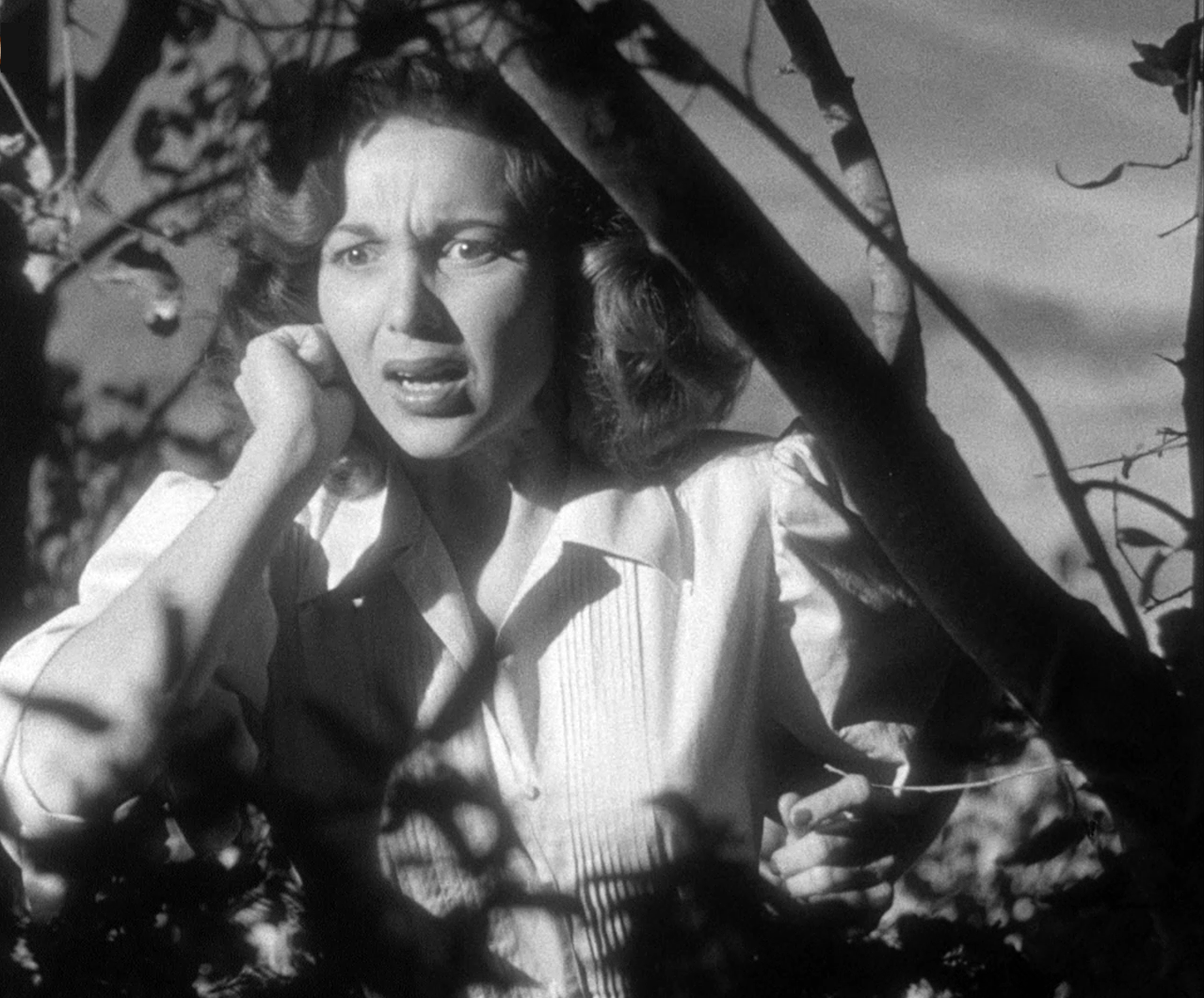 Now, if Invisible Man movies don't particularly excite me, then movies about cavemen leave me almost comatose!  So again, I had no high hopes going into this film.  Which is why it was rather surprising that I enjoyed it as much as I did.  We have here a surly mad scientist (Robert Shayne) who's experimenting with some sort of wacky regression serum that turns his house cat into a rampaging sabertooth tiger!  In fact, the first half hour of the film is solely taken up by sightings of the prehistoric killer cat and those townies it attacks. 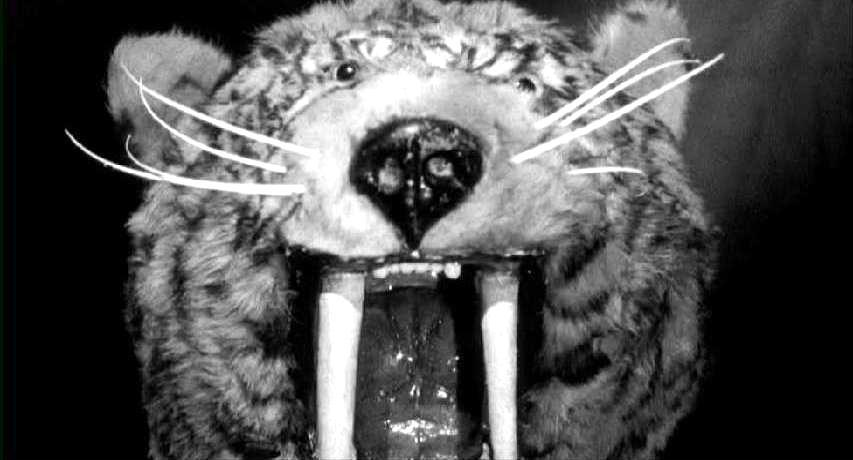 Eventually (and far too long a time into the film for any really AMBITIOUS mad scientist to think of it), Robert Shayne comes up with the bright idea to inject himself with the serum.  He forthwith transforms into a hairy, pug-nosed sorta missing link who rampages around the countryside attacking people.  Now, while THE AMAZING TRANSPARENT MAN was very bad but not in a "so bad it's good" way, THE NEANDERTHAL MAN was tremendously fun and entertaining to me.  This was helped in no small measure by the outrageous overacting going on by the entire cast.  The gurning and eye-darting and whispered asides (that amount to stage whispers) are so over-the-top that the only thing missing is dastardly mustache-twirling and hand-on-the-forehead fainting spells!  But it's all wonderful and great fun.  And Robert Shayne as the Neanderthal Man is so durn cute; he looks like he's actually a were-puggle!  This movie's well worth your time if your ready for some boneheaded fun. 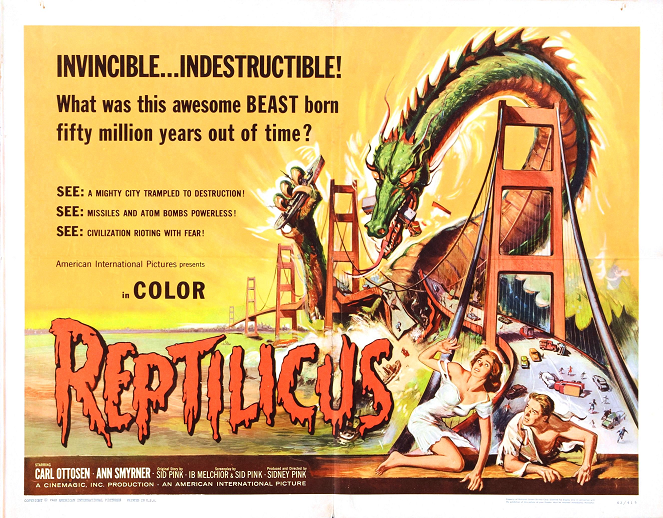 The final film in my Halloweeny horror triple feature is 1962's REPTILICUS which has the reputation of a rubber crutch.  I'm here to say it's justified; although it is in the "so bad it's good" category.  A drilling team brings up from deep inside the earth the (surprisingly) gorey severed tail of some giant lizard.

Our cast, ladies & gentlemen
Some Danish scientists (the film takes place in Denmark) throw the tail into the deep freezer but, of course, incompetence soon has it thawing out and regenerating into a Godzilla-sized rampaging lizard monster which is realized with special effects on par with THE GIANT CLAW. 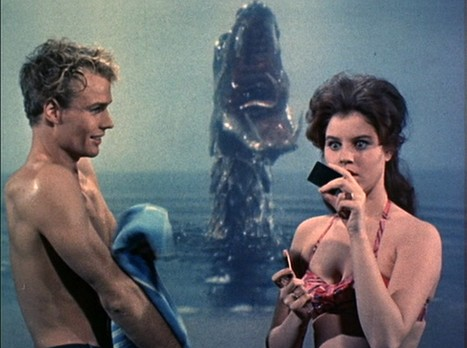 yeah, I found it hard to believe too!
The credits proudly trumpet that REPTILICUS is a Sidney Pink production directed by Sidney Pink and written (with help from Ib Melchior) by Sidney Pink.  I'm hoping it was a pseudonym.  All in all, if you're in the mood for some trashy nonsense, then REPSILLYCUS is fun enough to get you through. 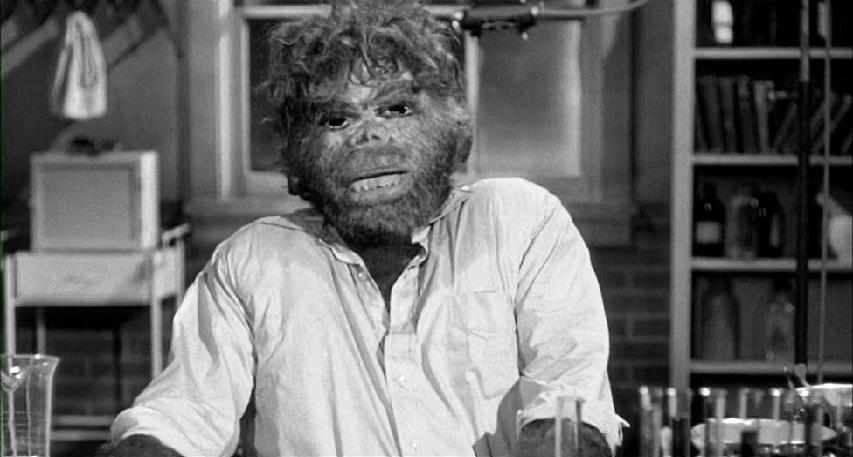