HALLOWEEN WITH THE LITTLE RASCALS 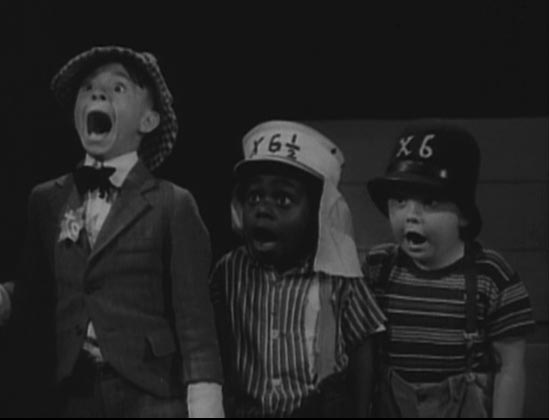 While I don't have all of them, I do have a few and I thought I'd watch them for today's Halloween Countdown.  The first one I watched was "OUR GANG FOLLIES OF 1936" (1935); this one was something of a Halloween appetizer because its not all spooky.  The premise of the short is another one of those "let's put on a show" episodes which often appeared in the LITTLE RASCALS/OUR GANG series.  However, there is one nice spooky sequence where the kids do a skeleton dance in a darkened theatre.  A sheeted ghost flies across the upper stage and then several kids dressed in skeleton suits come onstage and do a spooky dance. 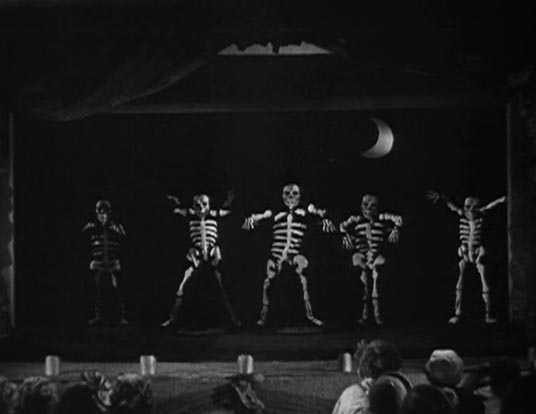 It's nice viewing for Halloween just for this one section of the short and the scared reaction of the kids in the audience is priceless. 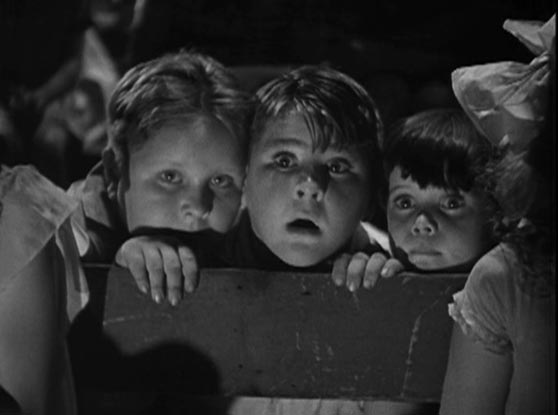 After this Halloween hors d'oeuvre, we now go on to our LITTLE RASCALS HALLOWEEN DOUBLE FEATURE.

The circus has come to town and Spanky, Alfalfa, Buckwheat and Porky decide to forge a doctor's note so they can stay home from school and go see it.  While Spanky and Alfalfa decoy their teacher, Buckwheat and Porky sneak back into school and leave the note on her desk.  Unfortunately for "our gang", when the boys tell her they're coming down with a cold or "maybe new monia", the teacher informs them that that's too bad since she's obtained tickets for the entire class to go to the circus tomorrow.  When the kids go back to get the letter, the school is locked and the caretaker (Dudley Dickerson - who played the cook in my favourite THREE STOOGES short "A-PLUMBING WE WILL GO in 1940) tells them that once the school's locked, it stays locked! 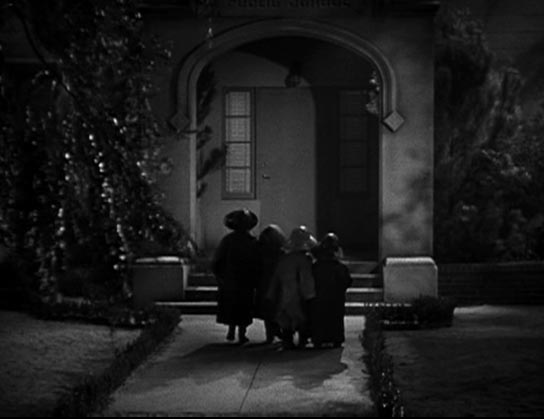 The kids come back later that night when it's dark and, of course, it's windy with lightning and thunder.  Buckwheat stays at the main entrance on guard while the Spanky, Alfalfa and Porky go around to a side window and climb in.  Just as the rain starts, Buckwheat is scared by an owl with glowing eyes and goes in the window with the other boys.  Buckwheat is sure he saw a spook but Spanky lectures them on how there's no such thing as spooks. 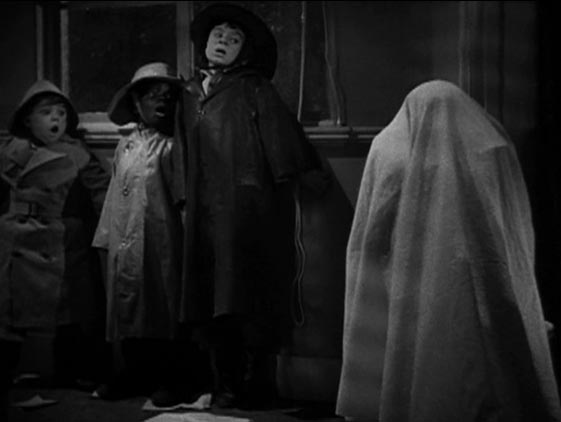 Naturally, the mischievous Porky has enters the room wearing a sheet and scares the others silly.  "Please don't hurt us, Mr. Spook" pleads Spanky.  Porky promptly takes off the sheet and says matter-of-factly "Okay."  All the commotion wakes the live-in caretaker who goes to investigate the noises.  Peering around the corner of a darkened hallway, the caretaker frightens the kids who run and hide. 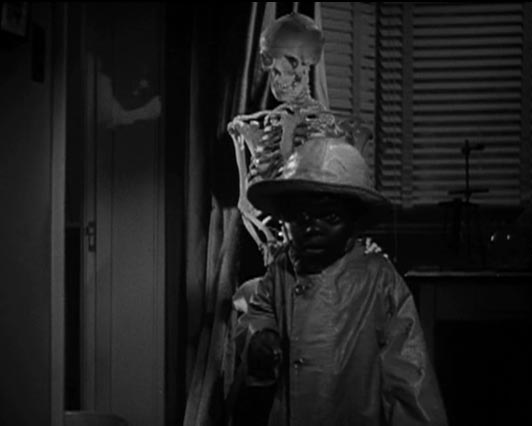 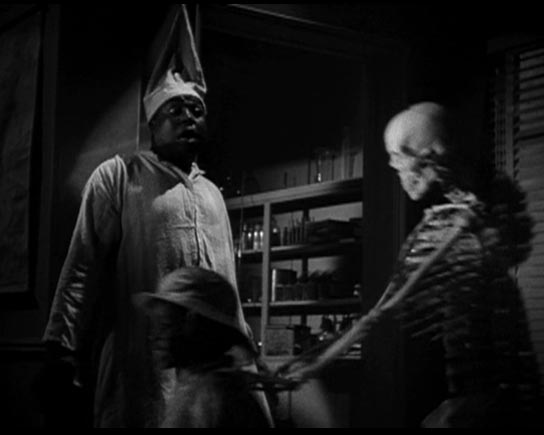 -- who then becomes terrified and plows through the closed front door of the school with the kids running out into the rain after him.  Naturally, the next morning all 4 kids wake up REALLY sick and their respective mothers tell them "For the last time, you can't go to school today!" 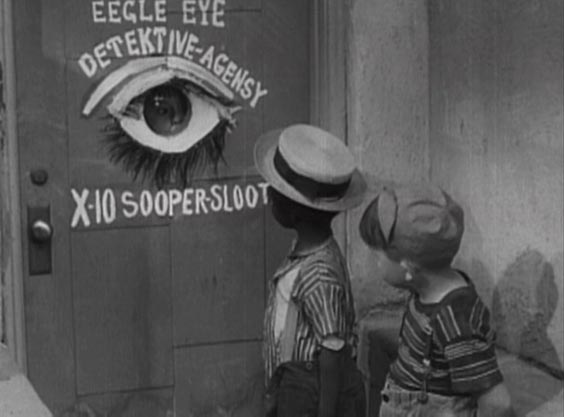 Alfalfa has started the "Eegle Eye Detektive Agensy" and now calls himself X-10 Sooper Slooth.  Buckwheat and Porky knock on the door which has a huge eye on the outside; when they knock the eye opens and it's in fact a peephole with Alfalfa looking out.  Bizarrely, this same eyeball peephole idea was used about 25 years later on the apartment door of Mrs. Emma Peel (Diana Rigg) on an episode of THE AVENGERS!  Buckwheat and Porky soon are made agents and they Eagle Eye Detective Agency soon gets it's first case:  Darla's candy has been stolen.  While investigating, Alfalfa, Buckwheat and Porky climb into a box on the back of a flatbed truck which takes them to the "Haunted House Amusement Pier" at Long Beach.  As the workmen carry the box inside the amusement ride, the kids inside overhear them saying they're delivering "headless bodies to the murder house" and promptly freak out.  Emerging from the box, the kids find themselves inside the pitch dark ghost ride.  Looking for a light switch, Alfalfa activates the spook show ride.  A record plays a spooky voice telling them they have a choice of two doors:  "If you choose the right door, you maaaaaay escape . . . but if you choose the wrong one .... bwah-hah-hah-hah-hah!"  One door has an animated dummy of a gibbering ghouls lurch at them; the kids run through the other door which leads them to a smoke-breathing monster. 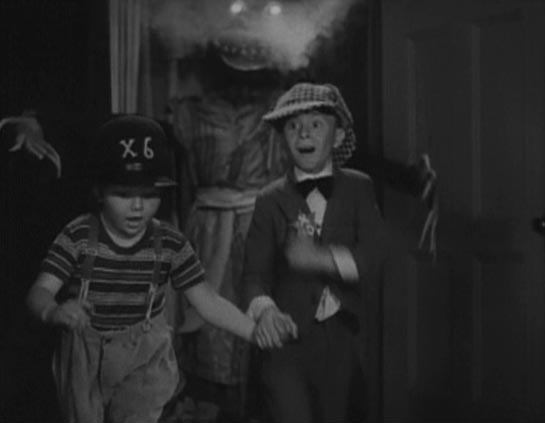 Alfalfa and Porky get stuck running in place from the monster on a treadmill floor while Buckwheat, in another room, encounters a fish tank with skeletal fish swimming in it and an organ with two skeletons playing it.

Running from the room, Buckwheat joins the other two on the treadmill. 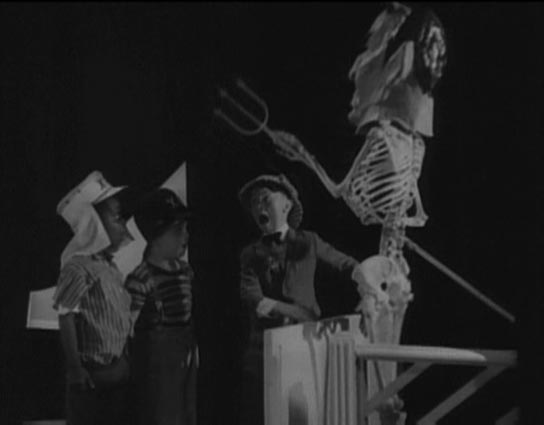 As each boy becomes exhausted, they fall slide down a chute where they encounter a devil-mask-wearing skeleton with a pitchfork.  The devil forces them to sit on a bench; when they do so, a safety bar lowers over them and the bench starts moving towards a buzzsaw which is aimed right at their throats. 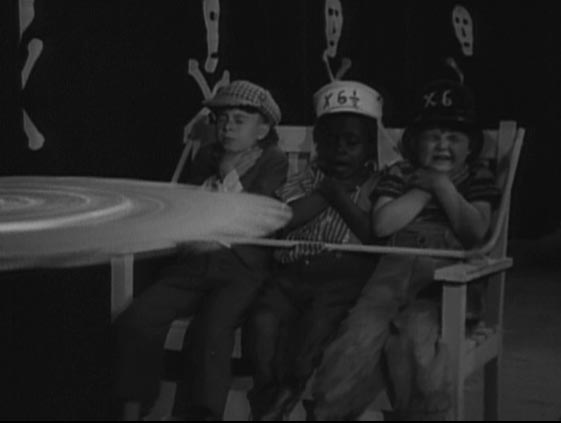 Before they get done in, the buzzsaw lifts above them and they emerge outside the amusement ride.  Once in the daylight, the kids run for their lives. 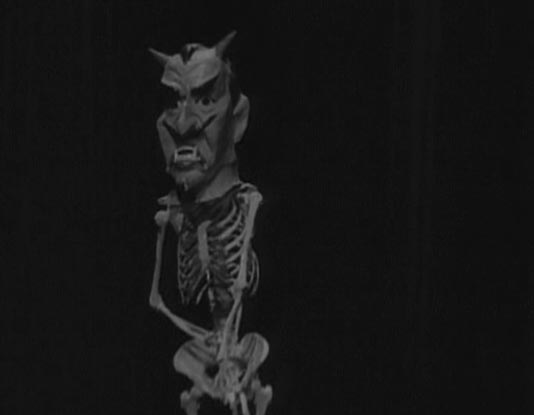 While it lasts, you can watch SPOOKY HOOKY below this post.
Posted by Cerpts at 2:11 AM