THIS WAS THE FIRST "MASTERS OF HORROR" EPISODE I EVER SAW AND IT'S BEEN QUITE A FEW YEARS SINCE I'VE REVISITED IT. 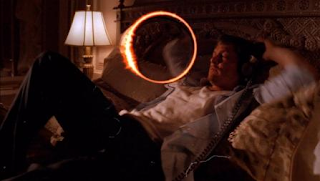 My first surprise was the fact that I'd totally forgotten Norman Reedus starred in it.  This episode is an interesting if flawed horror show which is probably much more impressive if you haven't read Theodore Roszak's "FLICKER"; one of my favourite books.  In fact, this John Carpenter-directed episode is something of a cross between "FLICKER" and Roman Polanski's "THE NINTH GATE".  The ever-delightful Udo Kier (of "ANDY WARHOL'S DRACULA" and "ANDY WARHOL'S FRANKENSTEIN") plays an obsessed film collector who hires glum Norman Reedus (of "THE BOONDOCK SAINTS" and, of course, "THE WALKING DEAD") to find a legendarily evil film called "LA FIN ABSOLUE DU MONDE" which causes those who see it to basically go nuts and violently kill themselves and anyone who happens to be nearby.  The original movie premiere was a bloodbath in which several people died. 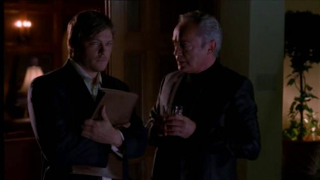 You know the film has it's evil hooks in you once you start seeing hallucinogenic flashes of violence in your mind inside the eponymous "cigarette burns"; they're those little circles you see in a film when it's time for a reel change.  Reedus goes on a globetrotting hunt for the whereabouts of the last known print of the film.  This part is very "NINTH GATE".  Despite the similarities between "THE NINTH GATE" and "FLICKER", "CIGARETTE BURNS" is still an effective little horror episode even if one wished that Carpenter has made a feature film out of this material instead of an hour TV show.  The proceedings seem a little rushed all the way through the running time and Carpenter, I think, could've done much more with it in a longer format.  But who knows.  It's probably better this way.  After all, a feature film version of "CIGARETTE BURNS" might cause the viewer to claw his own intestines out with his bare hands!
Posted by Cerpts at 12:30 AM